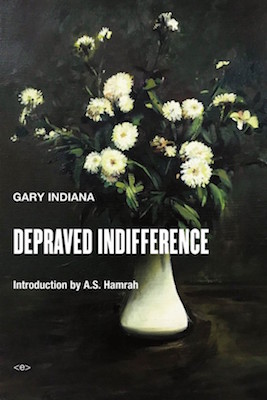 The following is an exclusive excerpt from Depraved Indifference, by Gary Indiana, which was first published in 2001. Evangeline Slote, an Elizabeth Taylor-lookalike and virtuosic con artist, leaves Las Vegas, accompanied by her alcoholic husband Warren and loyal son Devin. But when Warren dies, Evangeline and Devin get caught in a tailspin of forgery, fraud, and crimes.

By the time of this third encounter with Evelyn Carson, Warren had studied a rap sheet Styles Janowski had dug up for him, Styles being a retired Oceanside investigator who owed Warren many favors and creamed his pants sniffing into other people’s business. Styles had the creased face of an old iguana and drove around the desert in a white Cadillac with steer horns jutting from the front grille. He wore a black suit and a string tie at all times, looking like a cowboy undertaker. His voice had been wrecked by throat cancer surgery, he had a nasty scar like a translucent centipede running up his throat, words came out of him wrapped in crackling mucus. Warren thought Styles said something about a “colorful past” as he knocked back the Cuba Libre Warren bought him, though it might have been “color fast” or “crooked ass,” Warren never could understand a word Styles Janowski ever said. Luckily, Styles knew how to type.

Styles had the creased face of an old iguana and drove around the desert in a white Cadillac with steer horns jutting from the front grille.

So that third time, when he danced with Evelyn Carson, Warren knew, for example, that Evelyn Carson worked as a lobbyist for a slightly fishy managed health care company in Irvine. He also knew that Evangeline Annamapu Thurlow Slater Carson, a.k.a. a surprising number of other things on various warrants and indictments had been had up on grand larceny in Palm Springs for charging a mink coat and a set of diamond earrings to another Evelyn Carson’s I. Magnin account on the strength of a receipt with the other Evelyn Carson’s charge number on it. The interesting part was that the other Evelyn Carson shopped at the Santa Barbara I. Magnin, and the receipt was from there. Somehow the case got dropped, because the charging of the mink and the earrings had been approved by the store credit manager. Lucky or ingenious, either way it was all good.

Warren further knew that Evelyn or Evangeline or whatever her real name was had been arrested for shoplifting in 1961 in Sacramento, booked but never tried for grand theft in Long Beach in 1965, tried and convicted and given probation for auto theft that same year for taking a Glendale dealership car on a permanent test drive, arraigned but released on a plea arrangement for credit card forgery in Santa Ana in 1968. She had never done time. This history intrigued Warren as no other woman’s ever had. Warren had not, in fact, ever been much of a student of women’s histories unless, among male friends, the history of a particular woman’s vagina happened to be under discussion. Knowing these things about Evangeline ratcheted up her already potent allure. She had initiative and mobility, things Warren prized.

And he knew she would listen to him. Warren sensed from the beginning precisely what Evelyn Carson wanted from him and that she would let him do anything he wanted to her and he knew he could tell her all he’d been through, Up There. She liked hearing him talk about the war. She recognized that mortal time was hard to get through even when it was good, and it usually wasn’t. Evelyn Carson knew some things about time, she knew for example how long she could be Evelyn Carson in Palm Springs and when that would have to end, it was something feral about self-preservation and her instincts in this area were both delusional and impeccable. 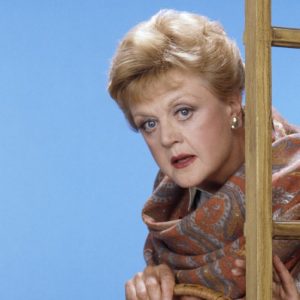 The 19 Best Crime-Solving Writers in Fiction, Ranked The crime-solving writer is one of the most (deservingly!) beloved tropes in all of crime fiction—literature, film and television...
© LitHub
Back to top