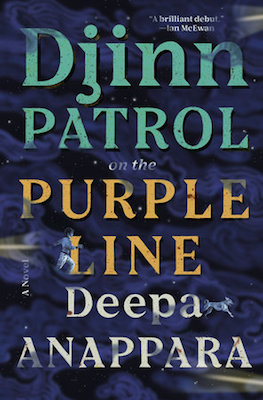 The following is an exclusive excerpt from Djinn Patrol on the Purple Line, by Deepa Anappara. Nine-year-old Jai lives at the end of the Purple Line, far from the high-rises where his mother commutes each day to clean the messes of the wealthy. When a classmate goes missing, Jai and his friends use detecting skills gleaned from TV shows to find the wayward student, for a novel that promises to be both hard-boiled and dazzling.

Our school is locked up behind a six-foot wall with barbed wire on top, and an iron gate that has a door painted purple. From the outside, it  looks like the jails I have seen in movies. We even have a watchman, though he’s never at the gate because he has to run errands for the headmaster: pick up Mrs. Headmaster’s blouse from her tailor in Bhoot Bazaar or fill a tiffin box with gulab-jamuns for her and the headmaster’s No. 1 and No. 2 sons.

Today too the watchman isn’t around. Instead there’s a queue starting at the gate-door, which is too narrow for all of us to go through at the same time. The headmaster won’t open the main gate fully because he thinks strangers will run into the school along with us. He likes to tell us that 180 children go missing across India every single day. He says Stranger is Danger, which is a line he has stolen from a Hindi film song. But if he were really worried about strangers, he wouldn’t keep sending the watchman away.

The headmaster must hate us. There’s no other reason why he makes us wait outside the gate on smoggy winter mornings like today when the cold traces our breath in white. Even the pigeons with plumped-up feathers, sitting in a row on a droopy electric wire above us, haven’t yet opened their eyes.

“Why can’t these children make a proper queue?” Pari says, scowling at the many shorter lines that have branched out of the main one. “We’re going to be standing here forever.”

She says this every day.

The shortest queue totters forward as if to prove her wrong. I scuttle across to stand behind a boy who is in Runu-Didi’s class. A comb the color of milky tea sticks out of the back pocket of his trousers. He removes the comb, sweeps it through his hair, plucks the strands caught between its close-packed teeth and pushes it back into his pocket. His face is spotty like a banana gone bad.

Pari and Faiz cut in line in front of me. “How dare you?” I say to them, but they grin because they know I’m joking and I grin back. I look around to see if Bahadur has turned up. Maybe he doesn’t know that back in the basti his ma is about to call the police. But he isn’t here and I don’t want to talk about him be- cause that will break up Pari’s and Faiz’s smiles. They have al- ready forgotten they were squabbling a few minutes ago.

I spot Quarter reaching the school gate. He’s in Standard Nine but he has failed the ninth standard two or three times. His father is the pradhan of our basti and a member of the Hindu Samaj, a shouty party that hates Muslims. We hardly ever see the pradhan anymore because he has bought a hi-fi flat and only meets hi-fi people. I don’t know if that’s true or just something Ma says when the basti-tap stays dry for days and everyone has to chip in for a water tanker.

Quarter is standing by the gate now, directing the movement of the queues like a traffic policeman on a busy road. He thrusts his long right hand in the air, with his palm facing forward, for our line to STOP. I obey at once and so does everyone else.

In our school Quarter runs a gang that beats up teachers and rents out fake parents to students when they get into trouble and the headmaster insists on meeting their ma-papas. Quarter doesn’t work for free, and I don’t know how students have the money to buy a papa or a ma. Faiz does loads of odd jobs, and he gives most of his money to his ammi and some money he sets aside to buy his favorite Purple Lotus and Cream Lux soaps and a bottle of Sunsilk Stunning Black Shine shampoo. Faiz says ma-papas cost more than a dozen soaps and shampoos.

Some boys are holding up the queue by making small talk with Quarter. They are always telling him about the one time they shouted at a teacher or a policeman to prove they can be rough-and-tough too. But there’s no one like Quarter because: first of all, every day, he stops at a theka in Bhoot Bazaar to drink a quarter-peg of daru, which is how he got the name Quarter. His eyes are always red and puffy and he smells like daru too; second of all, he never wears the school uniform; third of all, he dresses only in black: black shirt, black trousers, and a black shawl wrapped around his shoulders if he’s feeling cold; fourth of all, every morning, right after assembly, the head- master throws Quarter out for not wearing the school uniform. The teachers keep threatening to strike him off the roll because he has zero attendance but they haven’t done that so far.

When we get to the gate, I make myself brave and tell Quarter, “A boy in our basti has gone missing.”

Instead of attending classes, Quarter loiters around Bhoot Bazaar until it’s time for the midday meal break. Then he swaggers back into school and stands under a neem tree in the playground, surrounded by students who want to join his gang or hire his gang-members, and idiot-senior girls who point finger guns at each other and call themselves Revolver Ranis. Most girls stay away from Quarter though because he’s always making eyes at them.

Quarter is the only criminal-type I have seen up close. He has never been arrested by the police, maybe because his pradhanpapa bribes them. I wonder if somebody paid Quarter to make Bahadur disappear. But who would do such a thing?

I decide Quarter is my prime suspect. He and djinns, but I can’t question djinns. They may not be real.

When we get to the gate, I make myself brave and tell Quarter, “A boy in our basti has gone missing.” I have never talked to him before but now I stand straight as if I’m about to sing the national anthem at assembly. I watch Quarter’s face to see if he looks caught out because good cops and detectives can tell from the way someone blinks their eyes or tightens their lips if they are lying.

Quarter smiles an oily smile at a senior girl standing behind me. He strokes the hair sprouting above his lips and on his cheeks, too sparse to be a real mustache and beard even though he must be very old, like seventeen or something. Then he says “Chalo-chalo-chalo,” swatting me toward the gate.

“The missing boy, his name is Bahadur,” I say.

Quarter snaps his fingers too close to my ears, making their tips burn. “Chal-hut,” he growls.

I run into the school grounds.

“You mad or what?” Faiz asks. “Why were you talking to that fellow?”

“Quarter could have cut off your arm and thrown it into one of these bins,” Pari says, pointing at a penguin bin next to us.

The penguin’s yellow beak is open so wide that our heads can fit inside. Its white pot belly screams use me use me. Toffee wrappers sprinkle the ground around it because students toss stuff into the penguin’s mouth from a long way away and keep missing.

“I was doing detective work,” I tell Pari. 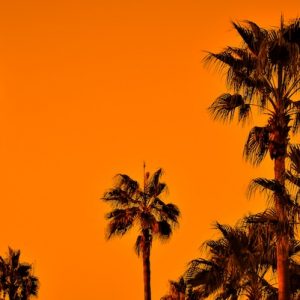 The Great Los Angeles Crime Novel—And the Women Who Are Revitalizing It Los Angeles has a long tradition of providing a multi-layered setting in which authors and directors have gleefully portrayed...
© LitHub
Back to top