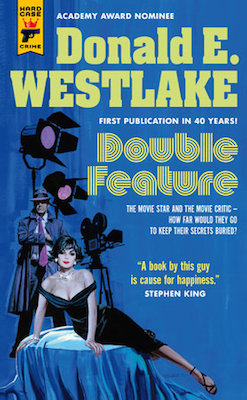 The following is an exclusive excerpt from Double Feature, which contains two classic novellas about murder and the movies: "A Travesty" and "Ordo," by Donald E. Westlake.

It’s amazing what you can do in an hour when your life depends on it. By eleven o’clock I’d converted into cash the following:

Loan from publisher against future earnings 1,500.00

Eleven o’clock. Five after eleven. I was back in my apartment, my pockets full of cash. But where was I going to get three thousand five hundred fifty-one dollars and six cents?

My grandmother’s trust fund? Not a chance. I’d cried wolf with the people at the bank two or three times already, and they’d made it perfectly clear my well-being didn’t matter to them one one-hundredth as much as the fund’s well-being.

My father? Another blank. He had the money, all right, and plenty to spare, but even if he was willing to help—which he wouldn’t be—the cash would never get here from Boston in the next twenty-four minutes. Besides, if I did ask him the first thing he’d say—even before no—would be why.

It was a long minute, but it finally ended with a too-familiar voice: “Hello?”

“Is that Mr. Thorpe? You’re a few minutes early.”

“Well, that’s fine,” he said. “And you’ve still got twenty minutes to get the rest.”

“I can’t. I’ve done everything I could.”

“Mr. Thorpe,” he said, “I thought we had an understanding, you and I.”

“Then if I were you, Mr. Thorpe, I’d take that six thousand four hundred dollars and buy a ticket to some place a long way from here.”

“Then if I were you, Mr. Thorpe, I’d take that six thousand four hundred dollars and buy a ticket to some place a long way from here.”

South America. The Lavender Hill Mob. But I liked the life I had here in New York, my career, my girlfriends, my name on books and magazines. I didn’t want to run away to some absurd place and learn how to be somebody else.

“Well, goodbye, Mr. Thorpe,” the rotten bastard was saying, “and good luck to you.”

The line buzzed at me; Edgarson, politely waiting.

“But it might take a little longer. You can give me that much.”

He sighed; the sound of a just and merciful man who knows he’s being taken advantage of but who is just too darn goodhearted to refuse. “I’ll tell you what I’ll do, Mr. Thorpe,” he said. “Do you know a place in your neighborhood called P. J.

“Yes, of course. It’s three or four blocks from here.”

“Well, that’s where I’ll have my lunch. And I’ll leave there at twenty after twelve to go turn in my report. Now, that’s the best I can do for you.”

An extra twenty minutes; the man was all heart. “All right,” I said. “I’ll be there.” And I broke the connection.

And now what? I went to the john to pop another Valium—my second this morning—and then I sat at my desk in the living room, forearms resting where my typewriter used to sit, and waited for inspiration. And nothing happened. I blinked around at my pencils and reference books and souvenirs and trivia, all the remaining bits and pieces of the life I was on the verge of losing, and I tried to think how and where to get the rest of that damned money.

From my brother Gordon? No. My sister Fern? No. Not Shirley, not Kit, none of my friends here in New York.

It was too much money, just too much.

What story could I tell my father? “Hello, Dad, I want you to wire me four thousand dollars in the next ten minutes because—”

There was a pistol on my desk; not a real one, a mock-up that had been used in a movie called Heller In Harlem. I’d watched some of the filming uptown, for a piece in Third World Cinema, and the producer had given me this pistol as a kind of thank-you. His name and the name of the movie and my name and a date were all inscribed on the handle.

I picked up this pistol, hefted it, turned it until I was looking into the barrel. Realistic little devil. If it actually were real I could kill Edgarson with it.

But it wasn’t real. So there was only one thing to do.

From Double Feature by Donald E. Westlake. Used with the permission of the publisher, Hard Case Crime. Copyright © 2020 by Donald Westlake.

The Girl in the Mansion:
How Gothic Romances Became Domestic Noirs 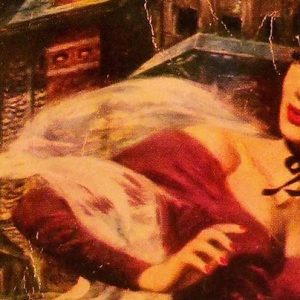 The Girl in the Mansion:
How Gothic Romances Became Domestic Noirs Whatever happened to that girl? You know the one I mean: long hair, old-fashioned dress, with a dark, looming house in the distance...
© LitHub
Back to top