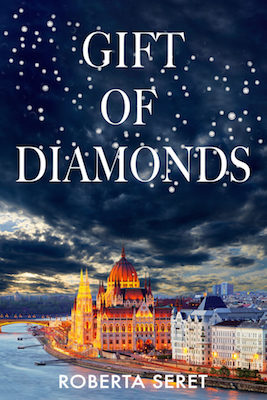 The following is an exclusive excerpt from Gift of Diamonds, by Roberta Seret. After seventeen-year-old Mica's parents are arrested by the Romanian secret police, she escapes to America with the family's diamonds. Which might be cursed.

I escaped Romania in the middle of the night, by bike, on February 2, 1965. It was the moment when the country was locked in a communist prison. I was seventeen years old then. Now, twenty- four years later, in the diplomatic and political frost of 1989, with the beginning of freedom, I’m returning. As I walk through customs at Bucharest’s Otopeni airport with my American pass‐ port held tightly in my hand, I feel a strange sensation: memory is pulling me back to a lost time.

I see my seventeen-year-old self in front of me, leading me into the labyrinth of youth. She takes my hand and warns me of pitfalls while I enter a world I may have forgotten. She’s cute, smiling, spunky, full of life. One would say she had been very much loved by her parents.

I follow her, admiring her short black hair cropped straight around her oval face, highlighting her high cheekbones and hazel eyes, with a small pointy chin and full lips. She’s of medium height, fragile like porcelain on the outside, but more resilient than she realizes inside. She’s dressed in a black turtleneck sweater and tight black leggings, wearing high black leather boots and covered with an Elizabethan-style coat that closes with a belt wrapped twice around her thin frame.

She leads me to a customs desk where I present my papers to an officer without any communication other than his indifferent stare. I understand that his silence, inherited from the communist era, still lingers. I look around me. There’s only one electric bulb for the entire room and its 40 watts flicker. The wind blows through a broken windowpane, letting in a winter chill. The airport is empty except for several policemen carrying machine guns. I watch them: smooth-skinned boys, dressed up as soldiers.

At the baggage claim, waiting for my suitcase, I notice bullet holes in the cement walls and dried blood on the floor. Broken glass and bullet casings fill every corner of the room. Someone tried to clean up proof of last month’s revolution, but didn’t finish. There’s a heavy silence permeating the air. Danger and risk still exist.

I reason to myself that I had to make this journey. And I look around, trying to find Mica, my seventeen-year-old self, my guide. I want to confess to her why I’m here, why I have come alone, despite the suffering that might befall me, now, as it did in the past. But I can’t find her.

I see my suitcase coming down the conveyor belt. I pick it up and feel its heaviness. I try to grip the handle tightly and suddenly I feel a piercing pain in my right-hand little finger. I close my eyes, try not to cry. I remember…

I was eleven years old, walking home alone from school. A policeman was trailing me. He detained me, handcuffed me, forced me onto his motorcycle, and took me to the chief of the secret police.

“IN MY OFFICE, I HAVE THE POWER TO DO WHATEVER I WANT.”

He unlocked the handcuffs, pulled my small hand into his, and removed from his pocket a pair of pliers. He flashed the tool in front of my face to taunt me and placed the metal tip under a flame. I saw it turn fiery red.

“Only you can save your father. Work for us and your father will be safe.”

“Such a sweet little pinky you have.” He took the red-hot pliers, tight‐ ened it on my fingernail and pulled hard.

“Ow!” I was on fire, burning. I fell to the floor in excruciating pain. “Get up!” He pulled me up by my sweater. He let his pliers play with

my thumbnail, burning the tender skin around it, shouting at me,. “In my office, I have the power to do whatever I want.”

I’m twenty-four years older and I’m returning home. I live in New York City and I am a goodwill ambassador to UNICEF for refugee children. This is one of the reasons for my visit. I have established an adoption agency in Transylvania for orphans, and I want to check that medicines from New York are being distributed correctly to the orphanages, and that each child has a crib or bed and food and medicines that we have sent.

I’m also returning because when I escaped, I had left something for my father in his underground bunker the night he was arrested. I need to find out if what I had hidden is still there. I’m afraid, yet excited, to learn the truth.

That’s why I’m seeking my teenaged Mica to guide me to a lost past. As I search for her in these hollow halls of the airport, some‐ thing unexpected is happening before my eyes: the reappearance of images from my youth. I try to hold on to the scenes as clues to help me understand how the past shaped my future. My present.

I look back to see, to feel, to relive the moments.

Every year on my birthday, my father and I talked about monsters and vampires. Tata was a wonderful storyteller. I cuddled in his arms and listened to tales of what happened in the woods of Transylvania where we lived.

In Romania, when we spoke of vampires, we meant Count Dracula, Vlad the Impaler, on whom so many legends were based. In Spera, the small town where I grew up, he was remembered as a prince, a leader who protected his people from the Turks when they invaded Romania in the fifteenth century. Still, we had to accept that his heroic deeds were cloaked in bloodthirsty evil. He believed that blood preserved his youth; thousands of innocent people died at the flick of his hand so that he could fortify himself. Mama did not approve of Tata’s stories, but she never stopped him. As she cooked, she’d frown while Tata laughed with joy,

telling me his tales.

As I became a teenager, what he shared became more complex. My father explained how the behavior of monsters and the char‐ acter of man could intersect. Tata was an engineer, and he constructed a stage for me where his stories became lessons for survival.

By the time I was seventeen, Tata’s stories had taken a different route. The characters were no longer based on legend or fairytale. I became the protagonist of the story. My father was preparing me for what I would need to know: that I was the daughter of a revo‐ lutionary.

Father was the leader of the Transylvanian anti-communists, which proved very dangerous for him as well as for Mama and me. My mother feared that Tata’s secret mission would force me to grow up too fast. She realized his work would affect my entire life and she tried to counteract the dangers by preparing me for the future: I would get to America. She taught me English and read Shakespeare to me.

When Tata’s clandestine activities, kept him out at night, Mama took me into the kitchen, ran the faucet strong so no one else would hear her words, and took out our shortwave radio to listen to Radio Free Europe. She’d translate the broadcaster’s English words into whispers and reveal the political truths to me.

As our country turned ruthless, Tata’s stories scared me. I wanted him to stop, but I stayed and listened. Now, years later, as I look back at my childhood, I understand his motive: his vampire stories were warnings. Politics had turned inhuman during that time in Eastern Europe, and his lessons became guiding principles to help me understand political realities. My father’s monsters taught me that there is evil in man. Given the proper incentives, man is capable of becoming cruel and sadistic. Tata didn’t want me to become a victim; yet, there was little he could do. I would be tested and I’d have to fight to survive.

But Tata’s passion for life overruled the savagery that surrounded us. He was optimistic, determined to do what was right. And he had a secret treasure, which he believed could open the door to dreams. I inherited his treasures. 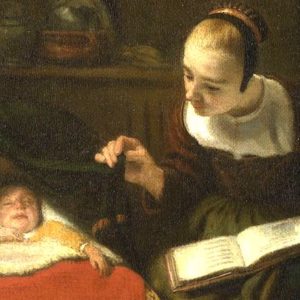 Maternity Leave Noir Of the many triumphs of feminism, and often-cited benefit of women’s equality is the goal of equal participation in the job market....
© LitHub
Back to top