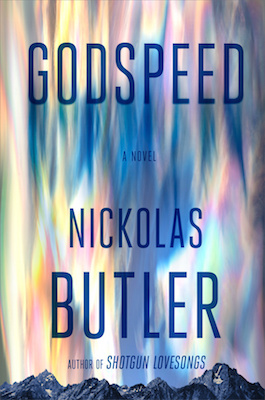 We're thrilled to reveal the cover of Godspeed, the riveting new thriller from Nickolas Butler, coming out from G.P. Putnam's Sons in July 2021. Read our exclusive preview excerpt here.

This was the house that would change their fortunes. They could feel it. Cole had barely steered his pickup off the highway and passed through an open cattle-gate before they began climbing the dusty canyon road north, and they could feel it—money—like a vibration in the crisp mountain air. It was humming out there, an expectancy, a promise, and they were driving towards it, cotton-mouthed, skin crawling. They could practically see it on the wind pushing the early autumn leaves, swaying the yellowing meadow grasses, smiling down upon the dappled river water below. The whole world here looked like money. Money just waiting to be plucked up off the ground—the leaves like greenbacks, the shimmer of the water like silver coins.

They needed this house, this break; they needed this work. Work for what sounded like as much as a year, maybe more. And not the thankless, back-breaking tedium they’d been reduced to for the past few years either. No, this was something to build a reputation on, a name, something to stake a man for decades. The kind of signature house a person could point to, and proudly say, I built that—me. I built that. The kind of house that, thirty years from now, when they were all broken-down old men, they could travel to with their grandchildren and be welcomed, like masters of some dying art. 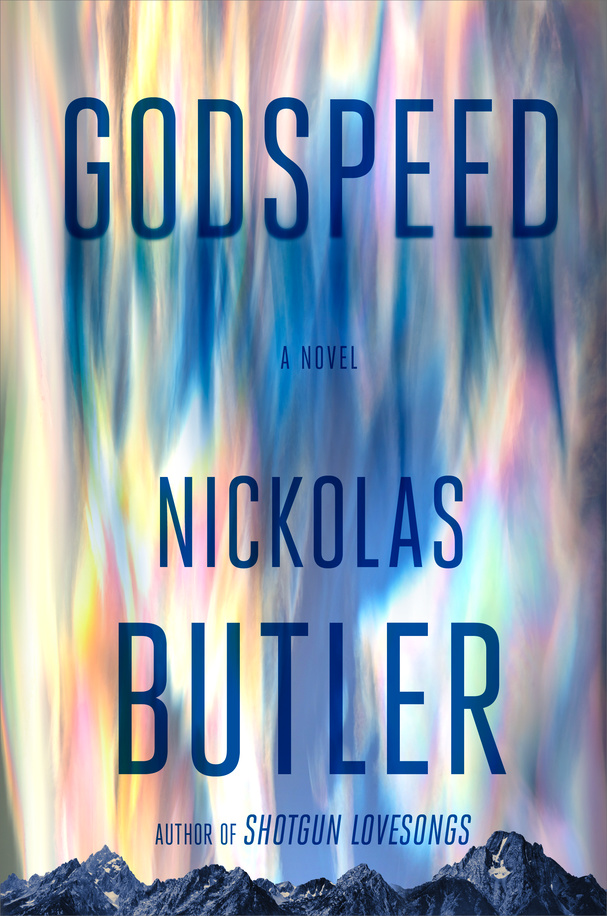 Bart rode in the passenger seat, blinking down at the chasm that had now fallen away just an arm’s length from the gravel road. Not even a mile away off the highway and already the country was wild, wild, wild. Below the road snaked a river raging white and blue, cataracts tumbling, and above them, off the low mountainsides, wispy waterfalls spilled down like great lengths of silver-white hair.

A prominent dip of chew bumped out Bart’s lower lip and by and by he spit into an empty Coca-Cola can. “I lived here almost twenty years and I ain’t ever been down this road,” he said, peering over at Cole, who took the gravel track with white-knuckled respect. A blown-out tire wouldn’t just be a pain in the ass out here; it would put them behind schedule for their noon meeting with the homeowner. “You ever been back here, Cole?”

Cole shook his head no, fixing Bart with a meaningful look for as long as he dared before turning back to the road ahead of them. This is big, pristine, private country, the look communicated. You and me, we don’t just get invited back here.

“She told me she had a driveway punched in last summer,” Cole said. “Another two miles or so off this road.” He pointed an index finger up into the mountains. “Somewhere up in there, I’m guessing.”

“You imagine the kind of bread they’re spending?” Teddy put in from the backseat of the extended cab. “I mean, a two-mile drive-way? Up here? That’s an Army Corps-type operation.”

“All that goddamn California money’s what it is,” said Bart. “Hell, that state’s filling up. Cheaper for them to come out here and plop a house down on a mountaintop than it is to buy a nice two-bedroom in San Diego or Los Angeles. Cheaper to build a house in the clouds. Lunacy, you ask me.”

It had been an unseasonably warm spring and summer in western Wyoming and now the mountain air was sweet with sage, the late August sky overhead deliriously blue and gauzed in cottony cloud. In the backseat Teddy studied a gazetteer, biting his lower lip, and running his fingers over the map. Bart hung an arm out the passenger side window as the truck began to pull away from the canyon-side. Soon they passed through a glade of trees and he reached out for the branch of a lodge pine, managing to snap off a handful of needles. Now the cab of the truck was filled with that smell, comingling with his Copenhagen chew—pine and mint and tobacco.

All three men were dressed just a bit more presentably than usual—unstained, newish Carhartt pants, plaid short-sleeve shirts with collars, scuffed work-boots buffed up near to a shine. Cole glanced at himself in the rear-view, tamping down his brown crew-cut with his fingers and studying his newly shaved face—the razor-burn beneath his jaw, his recently whitened teeth. Bart went to work with his pocketknife, cleaning beneath his fingernails, while Teddy sighed deeply and drummed his hands against his thighs.

Buzzed down practically to his scalp, Teddy’s blond hair betrayed a constellation of blotchy pink-purple birthmarks that Bart occasionally pointed to as proof positive he’d been born with a host of defects—a subpar IQ, a troublingly true moral compass, and a peculiarly deep pride in his wife of twenty years and the four young daughters they had brought into the world. Teddy was Mormon; Bart had once played drums in a death-metal band named Bloody Show. They loved each other like brothers; had ever since their childhood growing up together with Cole in the red-rock, box canyon country of eastern Utah, and then, later, as adults, moving out to Jackson Hole and this mountainous country, first as ski-bums chasing near-endless winters of deep powder, tourist girls, and the intoxication of brushing shoulders with celebrities at the town’s bars and cafes, and then later still, as men wanting to prove themselves in that same environment, tired of being seen as just townies, the blank-faced ski-lift operators you forgot as soon as you were swept away and up the mountain, the compliant bartender perfectly willing to suffer yet another drunken insult if it meant a ten dollar tip.

Which was why, a few years back, the three men formed True Triangle Construction, an honest-to-god LLC with business cards, letterhead—the whole nine yards. They bought three matching Ford F-150 pickup trucks, fixing a stenciled triangle on the middle of both doors, and for the first time in their lives felt perhaps what their own fathers had felt—purposeful. Yes, they would build houses and condos for the rich vacationers and tourists, sure, but more than that, they’d be building their own company, a legacy, something to leave behind when they could no longer swing a hammer, or crawl onto another 11/12 pitched roof. Hell—by then, they’d have a suite of offices, a secretary or three, business lunches downtown, big cowboy hats, and the lean, sun-browned visage of the kind of old men you’d see about town, that particular style and gravitas endemic to old American men of the Rocky Mountains—stern, sinewy, taciturn. Solid as Sears, as their fathers once said.

Bumping upwards along that gravel road, Cole pictured himself far off and into the future: Friday night at a comfortably appointed restaurant, the bloody remnants of a prime rib and baked potato on a plate, his elegantly aged wife across the table from him, a cup of strong black coffee, a forkful of chocolaty dessert, and then, that relaxation that passes over a contented man able to pay for his meal from a wad of pocket-cash before pushing back from a white-linen tabletop to work a toothpick at the ivories of his teeth.

“If we get this project…” Bart began.

Teddy leaned forward from the backseat until his face was framed by the jostling shoulders of his two friends. A former high-school all-conference cornerback, he was susceptible to Hallmark greeting cards, impassioned locker-room speeches, populist politics, and the every whim of his four girls, most recently ballet lessons and a pair of Shetland ponies he and his wife could not quite actually afford.

“I mean, can you imagine the size of our fee for a project like this?” Cole nearly shouted. “And if we muscle down and don’t farm out a bunch of the work? Shit, man. This is it. This is our launching pad. This is where True Triangle Construction takes off. You can see it, can’t you? Building ranches for rich actors and CEOs. It all starts right here.” He slapped the steering wheel for effect.

Cole had no problem imagining it. He had been imagining it, ever since the homeowner called him a week ago, out of the blue. The truth was, he hadn’t slept much since; each night doubting himself, doubting his own capabilities, frankly, doubting Teddy and Bart. What business did they have, really? Building some multi-million-dollar house? For the past three years they’d been just scratching by, renovating apartments, ski-rentals, the occasional commercial project; a shitload of dry-walling, roofing, and siding work; and then the odd new construction here and there—a handful of duplexes and a retail strip mall—Jesus Christ, how were they possibly prepared for this? 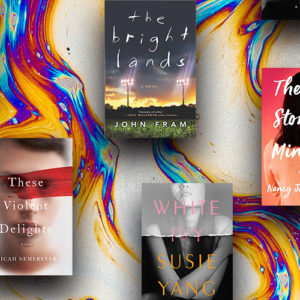 The Best Debut Novels of 2020 With so many tours canceled, it's more important than ever to do the work of discovering new authors at home. Lucky for us, we’ve...
© LitHub
Back to top