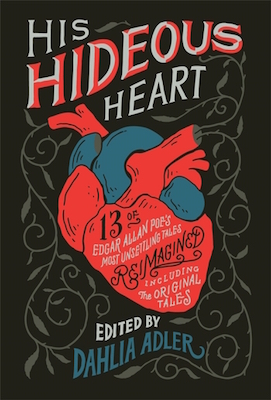 The following is an exclusive excerpt from “A Drop of Stolen Ink,” a story by Emily Lloyd Jones in a new collection edited by Dahlia Adler called His Hideous Heart, comprised of 17 classic mystery stories which re-imagine classic stories written by Edgar Allan Poe.

My first words were always a lie.

“Hi, I’m Augusta Pine.” I extended my hand so a security guard could scan my tattoo. He held my wrist as red light drifted over the back of my hand, illuminating whorls of ink. My ID tattoo was a silvery web of squares and threads that ran from knuckles to wrist. It was the basic design: government-issued electron-ink, with a mod along my thumb so that I could check my vitals.

My new boss polished his vintage glasses. I knew his type. Mr. Duvall dressed in antique clothing, but not for its style or its value. He wore it to prove he’d outlived its previous owner. His phone beeped, and he glanced down at it. It would be a biography of stats: my age, my education, even my social security number would be uploading to accounts payable.

Sweat trickled down my neck, dampening my silken shirt. I shifted, hoping that my restlessness would be mistaken for nerves. Mr. Duvall’s eyes passed over me. I knew what I looked like: a rangy feral cat that someone had tried to tame. Sharp cheekbones, thin mouth, and sharp eyes. I’d softened my appearance with a blouse and nails painted periwinkle blue.

“Welcome to Atreus Partnership,” Mr. Duvall said. “I am sure you will fit right in.”

I should. I’d been designed to.

There are three things you need to know about identity theft.

First, anyone can be a victim.

A few decades ago, there were toddlers with mortgage debt. Elderly grandmothers with drained bank accounts. Even the recently deceased were resurrected for their social security numbers. In the age of the internet, we uploaded our identities and hoped corporate firewalls would protect us. Spoiler alert: they didn’t. All of our information was ripe for the taking.

After several years of rampant identity crime, a solution was finally devised.

The only way to protect personal information was to put it somewhere safer: beneath our very skin.

The only way to protect personal information was to put it somewhere safer: beneath our very skin. Written in government-issued electron-ink, tucked underneath layers of epidermis and powered by the body’s tiny electrical impulses.

It was a simple, elegant solution. The identity tattoos could not be duplicated and they could not be stolen—at least, not without removing a limb. And without the warmth and breath of a life, an applied tattoo went dark, and all of its information vanished.

But here’s the second thing you need to know: criminals are smart. Human ingenuity knows few boundaries. There are still ways to steal one’s identity.

But before you despair, here’s the third thing.

Criminals may be smart.

A guard picked up a small patch of black filament with tweezers and gently laid it at the base of my hand. The nanotech burrowed beneath my skin, and in a few moments, a small barcode appeared. “It will let you in and out of the building,” the woman said. “Atreus Partnership is on the seventeenth floor, and this will let you into those offices as well, but no others.” I nodded. The tattoo wasn’t electron-ink, which meant it could be deactivated once I left the company.

I found myself in a glass elevator with two rail-thin young men. They talked in sharp bursts of technical jargon and didn’t look at me once.

I stepped into the hallway, found another set of glass doors—no handle, of course. Just a sensor. I held up my wrist.

I peered through the glass doors. The office was empty, save for two desks. It was a wonder of metal and glass, everything transparent and utterly sterile. My breath fogged the glass.

I looked up. A young woman stood a few feet away. She looked nearly as transparent as our surroundings—white-blond hair and pale skin. Only her mouth had any color; her lipstick was the red-orange of a sunset. “Your wrist,” she said. Her voice had the lilt of an accent—London, I guessed. “The sensor’s a bit wonky. You need to angle your hand down.”

I did as she said.

“Well, I hope you last longer than your predecessor.” She turned to the desk on the right, settling into her chair with a practiced ease. “He hit Reply All on a sensitive email thread.”

“Good.” She flicked me a cool glance. “I’m Adriana—a senior intern, so you’ll be answering to me.” Her introduction finished, she began rummaging about in her desk.

I found myself studying her the way I’d watched Duvall, the jargony employees, and even the security guards.

My handler liked sending me into these situations without briefing me first, because it made me second-guess every interaction.

I didn’t know whom to suspect, so I suspected everyone.

I jogged every evening. Gravel crunched beneath my feet, and I could hear the lapping of the reservoir lake a few steps away. It was a quiet sort of place, the trees blunting the sounds of the city.

A second figure slipped from the shadows, and before I could blink, a man was running alongside me. He was thin, with a blade of a nose and a mop of brown hair. He caught up easily, his strides eating up the distance between us.

“Prefect,” I said, sounding only a little winded. “You’re late.”

“Well,” he replied, with a glance down at his forearm. His tattoo was elaborate—global clocks ran across his forearm in a small grid. He was a man who lived in many times at once. He checked a clock, then tapped his wrist. “It’s a Tuesday. I had to meet with three other assets.”

“Poor you,” I said. “Stuck telling people what to do all day.”

For all that I gave him a hard time, Prefect wasn’t a bad handler; he’d kept things professional, if a bit aloof. And I’d heard rumors of other prefects—ones who weren’t afraid to misuse their wraiths. A person with utter control over another . . . well. Let’s just say humanity’s track record wasn’t great in that regard.

“How are you liking the new job?” he asked after we rounded the lake.

“It’s been one day.” My breath was fraying, every inhale jagged. “I learned where the cafeteria is. I met Duvall’s other receptionist.”

“And have you guessed the target?”

“And how do you know that?”

“He wears the clothing of dead men the same way poachers drape themselves in furs. Also, he’s got that ‘I’m so rich, look at me’ vibe.” I took my eyes off the path to glance at Prefect. “I’m right, aren’t I?”

A few paces, and then Prefect said, “You’re right.”

“Please tell me he’s a spy.” It came out a little breathless as we rounded a bend in the gravel path. “I’ve always wanted to take down a spy.”

Prefect allowed himself a small sigh. “He’s a thief.”

Prefect slowed, and I slowed with him, a little grateful for the reprieve.

“So what did he steal?” I asked. “Jewels? Famous baseball cards or something?”

Prefect drew in a breath and exhaled; steam fogged around us both. “We believe he is currently in possession of a duplicated government electron-ink tattoo.”

I stumbled to a halt; rocks slid around my feet, and I heard several of them as they plop-plopped into the reservoir. “That’s— that’s not possible.”

The whole point of electron-ink tattoos was that they could not be duplicated. The ink was top secret, accessible only to government officials.

The whole point of electron-ink tattoos was that they could not be duplicated. The ink was top secret, accessible only to government officials. Every shipment was tagged, and the ink required a password to activate. Without that password, the nanotech became inert. And caused chemical burns.

No criminal could manage it. Which meant—

“I do know who our elected officials are, yes.”

“Hypothetically,” said Prefect, “if such a man were to have a mistress, he might want to give her access to his office. Every federal office is wired so that comers and goers are recorded in the public record. If he’d allowed his mistress to visit, his indiscretions would have been obvious. So he found a way around it.”

I snorted. “So he bribed federal agents to duplicate his own tattoo? To give to his mistress? That’s either brilliant or incredibly stupid.”

“Considering the tattoo was stolen before it could be applied,” said Prefect grimly, “I’m going with the latter.”

“We think so. He contracts out to several branches of government, and on the day the tattoo went missing, he had been in NAME REDACTED’s office. But Duvall has been searched—thoroughly. As has his house. And his office.” Prefect’s mouth twisted at the edges. “We’ve been at this for months. Sent in special agents, even a few contractors. But we don’t have enough evidence. Judges will no longer sign off on our warrants.”

“And you can’t involve the cops,” I said. “Because then it might leak that our government is actually a corrupt crapshow.”

And this was why I’d been brought in.

“I’ll find it,” I said. My voice was tart. “And presumably save our government from another scandal. I assume there’ll be parades in my honor? A few medals? How about an actual paycheck instead of this ridiculous stipend? Or—”

“Your old life back.”

That stopped me cold.

His gaze and voice were steady when he replied, “Get this done, and we’ll reactivate your old identity.”

“I could go home,” I said. The desire curled low in my belly, deeper than a physical hunger. For me, home was the scent of damp wood, the creak of floorboards beneath bare feet, the background thrum of the nearby traffic, the boxes of takeout because our parents were too busy to cook, and the comfortable old couch that sank a little in the middle. Home was chaotic and bustling and full of the people who truly knew me. Not the name written beneath my skin—but me.

“And if I can’t find the tattoo?” I asked. “Let me guess— something terrible happens to me. An extra five years, or solitary confinement?”

Prefect glanced at his forearm; he was somewhere else, even as he stood beside me. “Where do you get these ideas?” he said, exasperated. “We won’t add to your sentence—but we won’t lessen it, either.”

Ten years. Ten long years. I’d lived four of them, but six yet remained. It made me want to keep running until my lungs caught fire.

Prefect reached inside his breast pocket and withdrew a necklace. “Scanner,” he said. “Smash-proof, waterproof, and looks cheap enough that it probably won’t be stolen. When you find the tattoo, verify it with this.”
I slid the chain over my neck.

Prefect glanced out at the water, then shook his head. “I don’t know why you jog here.”

I could have answered a number of ways. That people picked at scabs because they didn’t know how to let them heal. That remembering was the only way to honor the dead.

I answered, “Aren’t criminals supposed to return to the scene?” 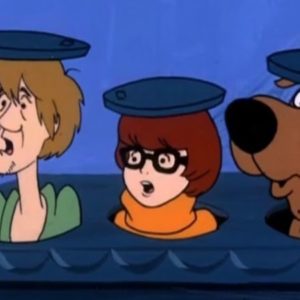 50 Years Ago, Scooby Doo Was the Perfect, Weird, Hopeful Mystery Series 1969 Needed Fifty years after his creation, Scooby Doo needs no introduction. But when he appeared on television for the first time,...
© LitHub
Back to top