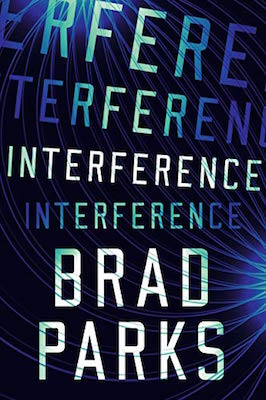 The following is an exclusive excerpt from Interference, by Brad Parks. Brigid is horrified when her husband, Quantum physicist Matt Bronik, begins suffering horrible seizures, likely related to his secret research. Violently ill and with his project having caught the attention of various competitors and government agencies, Matt's life seems in danger. And then, during a seizure, he disappears. And Brigid must find him before it's too late.

Around three o’clock, I was finally permitted to enter Matt’s room. He had a tube running into him just below his collarbone. A variety of medical devices—monitors and whatnot—surrounded him, and even my lousy ears could make out the steady beep that represented his heart rate. There was a ventilator, but the mask was hanging on the hook, not strapped to Matt’s face.

He was breathing on his own, his chest rising and sinking rhythmically.

His eyes were closed.

In some ways, he looked like he normally did. Matt kept what little hair he had shaved to a stubble, a concession to his male-pattern bald- ness. His graying beard was neatly tended, as usual.

It was around the eyes where his appearance was shocking. They were sunken, like he had abruptly aged from thirty-nine to sixty-nine. A nurse who was holding a computer tablet looked up at me and said something. I was so fixated on Matt I wasn’t really looking at her

until the end. I thought the last word she said was moment.

I’ll just be a moment.

“Thank you,” I said, hoping it was the right response.

She spent a few more seconds consulting her tablet, then nodded at me, making room for me to approach the bedside.

Matt was wearing this mesh vest that wrapped around his body twice and was strapped to the bed rails in several spots—to restrain him, I supposed. One of his arms was by his side. The other was folded on top of him. It looked so sinewy strong it seemed hard to believe the person attached couldn’t make it move if he wanted to.

His legs were covered by a thin white hospital blanket. His ankles were bound by these two fuzzy cuffs that had also been attached to the bed rails.

The only answer was the metronomic beeping.

I grabbed his hand, the one that was down at his side. I had been expecting maybe it would feel stiff or cold, but it was pliant, alive, and very warm—warmer than mine.

The nurse had walked away, perhaps not wanting to be a part of this private exchange.

I stopped, not knowing how to finish the sentence. I didn’t know what the hell it was going to be.

“The main thing is I love you. And Morgan loves you. And . . .” I was faltering, but I forced myself to keep going.

“A triangle is the strongest shape in nature. You always say that.

Suddenly Matt was trying to sit up. His teeth were clamped against his lower lip. Spit sputtered out of his mouth. As soon as he encountered the vest and the straps that were restraining him, he began moaning in frustration and straining against them, turning a terrifying shade of crimson.

He was having another seizure.

A guttural noise—something that sounded like “Iwann-iwann-iwann-iwann”—came pouring out of him. His efforts to overcome the straps only intensified. The veins on both sides of his neck popped like tiny snakes. I seriously thought he was going to rupture something. Matt had this penchant for doing sit-ups, push-ups, and burpees when he felt like getting his blood moving, and they had created a powerful body that did not tolerate being tied down.

An alarm bell started clanging. The nurse had returned.

“What’s happening?” I asked, dimly aware the question had come out as a shriek.

I couldn’t hear her reply, but I said, “Can’t you do something?”

A doctor had come rushing in, half shoving me aside. I put my hand on Matt’s shoulder, just to keep some part of me in contact with him.

Hearing is something of a specialty of mine, even if I’m not very good at it. And therefore, something in me knew: Matt couldn’t hear me right now.

He was trapped in a world even more silent than mine. Here, but not here.

Any talking I did at this point was strictly for my own benefit, which struck me as especially pointless.

Instead, I closed my eyes.

I am a member of that vast, indistinct, perpetually confused congregation of the spiritually nonreligious. Which is to say I believe in something; I just can’t tell you what.

On some core level, I know there is something bigger than me out there, something I feel when I stand on top of a mountain, or gaze up at the stars, or look into my child’s eyes, something that has long moved humanity to search for metaphysical answers.

At the same time, I know what my husband has told me about the unfathomable vastness of the cosmos and about the extraordinarily high mathematical likelihood that other intelligent life must exist.

Given those truths, it seemed self-centered to believe that the Bigger Something would be too terribly concerned about the trifling affairs of one member of one tiny species, scrambling around one rocky planet, rotating around one unremarkable star somewhere out toward the edge of one insignificant galaxy.

Therefore, I am ordinarily skeptical about the efficacy of prayer. Maybe it’s because so many of mine have gone unanswered.

But at the moment I had nowhere else to turn.

As Matt bucked and thrashed, I screwed my eyes shut. And I prayed.

I prayed harder than I ever had in my whole life.

The 35 Most Iconic Caper Movies, Ranked 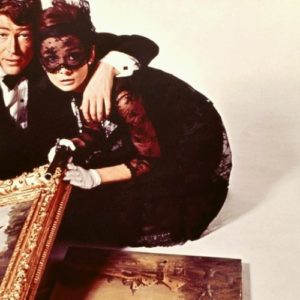 The 35 Most Iconic Caper Movies, Ranked Here it is—the other half of our endeavor to evaluate movies about large-scale theft! This is the accompanying list to our recently...
© LitHub
Back to top