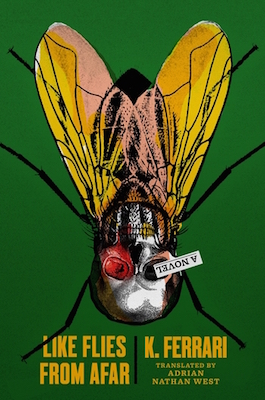 The following is an exclusive excerpt from Like Flies From Afar, K. Ferrari. Luis Machi is a larger-than-life Argentinian oligarch, with ten million dollars in the bank, and a dead body in his car. But despite all the terrible things he's done, he's innocent of this murder. But finding out who could have wanted to frame him for this crime is a lot easier said than done.

Their Good-Cop, Bad-Cop routine is so grotesque, it seems like a put-on. But Mr. Machi’s nerves make him feel like like he’s no longer himself, but someone else, someone he doesn’t even know.

The one playing good cop looks a little thinner. But he’s not.

“A person like you,” he says, “has got no reason to be in this part of town.”

“Could be dangerous,” he says.

The other—shorter, fat, mustachioed—is the archetypical Buenos Aires flatfoot. He doesn’t move the pistol from his hip or his finger from the trigger.

“What you doing around here?” he asks. “You lost or something?”

“Or you out trying to find something?” he asks. “You got your license and registration?” he asks.

Mr. Machi perspires through the Armani shirt stained with blood beneath his blazer and digs around for his billfold.

“I felt better when I saw you guys,” he says, “I don’t know this area.

“I got lost,” he says. “Here are my license and registration,” he says.

Mr. Machi’s pulse is going like a blender. He gives the bad cop the billfold with his license, his registration, the papers for the Glock, and his concealed carry permit. Also the card of a judge he’s friendly with and another from the minister of the interior.

Please assist the bearer of this card, Señor Luis Machi, with all means at your disposal, the card reads. But the bad cop doesn’t look at it. Instead, he’s eyeing up the papers for the Glock.

“Of course,” Mr. Machi says, cowed. Cowed and uncomfortable in a humiliating role he’s far from accustomed to playing. He asks himself when they’ll get around to the part about the bribe; his fear keeps him from making the first move. How much could that fat fuck possibly make? Mr. Machi wonders. Cash, that’ll solve everything.

“Well, a person like yourself has to take certain precautions, there are a lot of delinquents on the loose,” the good cop remarks with a smile straight from a toothpaste ad.

“Exit the vehicle,” the bad cop orders. If his face was in an ad, it would be for antacids. Before and after. The bad cop would be before.

“I don’t think that’s necessary, Sánchez,” the good cop says, but the bad one keeps pressing it, even when Mr. Machi is already halfway out of the car:

“Exit the vehicle, please, and let me see your weapon.”

They look at the Glock, weigh it in their hands, admire its workmanship.

“Nice piece,” the good one sighs. “Congratulations.” “Not like this garbage we’re packing,” Sánchez says,

letting the bad-cop role drop a bit while he palms the holster hanging from his belt, smiles for the first time, and winks. “Just think, we’re law enforcement professionals, and we’ll never get our hands on one of these, will we, Sosa?”

“True,” the good cop, aka Sosa, concedes. “Would you believe, sir, we have to pay for our practice rounds out of our own pocket?”

Mr. Machi doesn’t listen to them, he replies on auto- pilot, lets his years of miscellaneous bribes and kick- backs speak for him while he thinks: I’m calling too much attention to myself here. These two are witnesses, that’s  a  big  risk,  I  gotta  clear  out  and  dump  this  body somewhere else.

Mr. Machi’s autopilot says it’s a damn shame—that he’d like to do what he can to help out with that regrettable situation, what do people expect if not even the forces of order can make a fair day’s pay—but then Sánchez cuts him off and brings him back to reality.

“You’re missing a bullet here,” he says. “It’s been fired recently.” He’s arching his eyebrows, letting the bad cop peep back through.

“The gentleman has a license,” Sosa butts in, a good cop  through  and  through.  “He  doesn’t  have  to  explain anything.”

“A couple of dogs,” Mr. Machi claims, not especially sure why.

“I don’t know where exactly, over there, I think, on the other side of the highway,” he ventures.

Mr. Machi realizes that it’s time. He stops trembling, recovers his composure, and smiles in turn.

And this is why, when he finally puts the BMW in gear—though his wallet is notably lighter, missing several hundred-peso bills, and his Glock is now tucked into Officer Sánchez’s belt next to his subpar regulation pistol—Mr. Machi feels like himself again. The two officers wave him off with copious apologies and offers of assistance with whatever he might need, but Mr. Machi, once more master of himself and a master to others, no longer hears them, and pulls off at top speed.

“I need to get this over with now,” he says, looking himself in the eyes in his rearview mirror.

But it’s not going to be that easy.

14 Enormous Crime Books for the Long Days Ahead

The Girl in the Title of the Crime Novel: The Great Crime Fiction Disambiguation Project 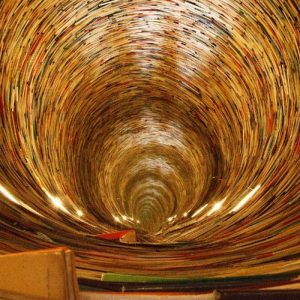 14 Enormous Crime Books for the Long Days Ahead In Patti Smith’s memoir Just Kids, she writes that during her many bouts of childhood illness, reading long novels kept...
© LitHub
Back to top