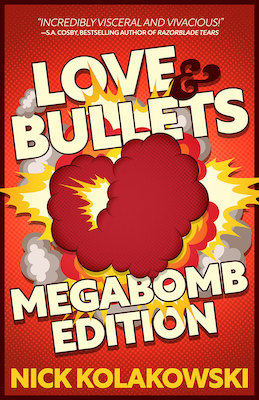 The following is an exclusive excerpt from Love & Bullets: Megabomb Edition, by Nick Kolakowski, a cross-border noir epic about a criminal couple on the run.

Bill knew the bastards were following him.

Maybe he should have dressed a little less conspicuously, but the white seersucker suit had called to him as he rifled through his luggage that morning. Paired with a straw hat, a cornflower-blue dress shirt, and a natty bow-tie, he looked every inch the Hemingway character as he exited the five-star Meliá Cohíba, a block away from the crumbling splendor of the Malecón, the road that separates Havana from the sea. Weeks of dressing like a stereotypical tourist, in t-shirts and baggy shorts, had sickened his soul.

He hungered for a decent meal, a difficult thing to find in the state-run hotels, where the employees swiped the best stuff behind the scenes. Those stolen morsels often found their way to the paladars, or the small restaurants that Cubans ran out of their homes. A concierge had recommended a good one a half-kilometer from the Cohíba, claiming the family there served the best coffee in Havana, provided you were copacetic with drinking it beside a coop that housed an irate rooster.

Crossing the Malecón to the crumbling sea-wall, he paused to reach into his jacket and extract a flat alligator-skin case. Inside sat a trio of Dusty Brothers cigars. Yesterday morning Fiona had left for their factory in Nicaragua, to solve some sort of problem. Bill had never met the guys himself, but he knew they paid her a lot of money to do their dirty work, and always sent her home with a fresh box of smokes. Cupping a lit match in his hands, he torched the smallest of the cigars. The smell and the smoke he could take or leave, but the nicotine really helped him think.

Truth be told, he needed a few days away from his girlfriend. If you think relationships are hard, try maintaining one while on the run from some of the worst people alive. Sure, Bill drank when stressed out, and sometimes let his mouth run a little—that didn’t give Fiona the right to throw things at his head, or tell him over and over again to get his crap together.

He missed the days when they would lie in bed until eleven, find something sugary to eat, and spend the afternoon listening to music while Fiona cleaned her guns. Nothing big or fancy: just living life. During the worst night of their escape, chained in a redneck psycho’s basement, Bill had clung to those memories the way someone religious might grip a crucifix. But even in Havana, their old routine failed to return; they were too wired, counting and recounting their cash, jumpy at the sound of footfalls and loud voices.

Returning the case to his pocket, Bill noticed the man and woman standing fifty yards further down the Malecón. They were dressed like the vacationing Europeans who filled this section of the city: linen shirts, khaki pants for him and a knee-length red skirt for her, their faces hidden by sunglasses and wide-brim straw hats.

Something about the couple set Bill’s inner alarm wailing. Maybe it was how they kept glancing his way. Or how their hands stayed in their pockets.

Bill breathed smoke and strode with purpose in the opposite direction. At this hour of morning, swarms of kids dashed along the low wall to his left, breaking around the old men sunning themselves on the concrete. A few stopped their frantic activity long enough to ask Bill for a peso; he waved them off. Another quick look over his shoulder confirmed the worst: the couple was following him, fast. From twenty yards away, he could see the man was hulking as a football player, the woman small and lithe.

What did they want?

When you make a living by ripping folks off, the list of those who want you dead becomes very, very long after a few decades.

Top of the Kill Bill list: the crew in the Dominican Republic who had offered Bill protection after he ran out on his old employers, the Rockaway Mob. After a few weeks, Bill and Fiona had decided the “security” came at too high a price, and took their leave. Maybe he shouldn’t have left with a big chunk of the crew’s money.

Competing for the number-one spot on that same list: the Rockaway Mob. A group of scary dudes back in New York City who wrecked things better than a herd of bulls in an antique shop. It was fun when the bulls were on your side, and you wanted that antique shop stomped flat, but it was far less entertaining when those horns thirsted for your blood. Maybe he shouldn’t have left with a big chunk of their money, either.

And if you excluded those two fine groups, you still had thirty-odd years of rubes itching for a shot at Bill’s head. Hell, for all he knew, his fifth-grade teacher had signed away part of her retirement savings to a hit team as retribution for Bill stealing her car back in the day.

“I should’ve been an accountant,” Bill sighed.

It was suicidal to stay in the open. He waited for a break in traffic and trotted across the Malecón again at Calle 19, skirting the elegant hulk of the Hotel Nacional. On the opposite curb he stopped and turned, cigar clenched between his lips, waiting to see what the couple did next. He was reasonably certain neither one carried a pistol. When you arrived at José Martí Airport, just outside of Havana, the customs agents ran your bags and bodies through metal detectors. The regime’s paranoia made it almost impossible to buy a gun on the street.

But knives were pretty easy to find.

The couple stopped across from Bill as the Malecón swelled anew with Russian-made taxis and ancient Fords. Their sunglasses and hats mostly hid their features, aside from sharp jawlines. The woman had slashed her mouth with a deep red lipstick that made it look like a wound.

Just as quickly as it appeared, the traffic began to slacken again. A beautiful battleship of a ‘57 Chevy, all fins and polished chrome, slid to a stop in front of Bill. The young driver craned his head toward the open passenger window, asking if señor needed a ride somewhere for cheap.

Yes, señor most definitely needed a ride, price no object.

Opening the heavy rear door, Bill slid into the backseat. “Vamos!” The Chevy heaved onto the road, its joints creaking as it picked up speed. Bill stuck his hand out the window and offered the disappearing couple a proud middle finger.

Bill settled into his seat, puffing his cigar. His nerves demanded something a little stronger than paladar coffee. In halting Spanish, he told the man to take him to El Floridita, one of the most notable drinking-holes in town, where the bartenders could whip him up one or three world-class daiquiris. As the Chevy squeezed through avenues clogged with antique cruisers, the fear struck Bill hard as a bullet:

Of course they hadn’t chased him. Morning on the Malecón meant too many witnesses and cops, in a country that doubled as a jail.

They were testing his perimeter, seeing how he reacted.

And they knew where he was staying.

The Best International Crime Novels of 2021 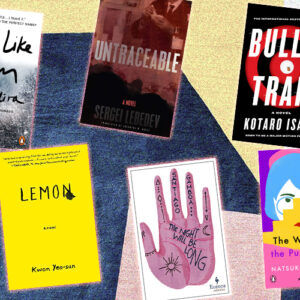 The Best International Crime Novels of 2021 International fiction has played a role of particular importance during the past two years as our worlds have shrunk, making...
© LitHub
Back to top