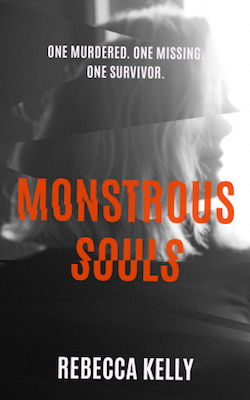 The following is an exclusive excerpt from Monstrous Souls, Rebecca Kelly. Ten years ago, Heidi, her sister, and her best friend were viciously attacked. Heidi was hospitalized with serious injuries, her sister went missing, and her best friend died. She has never been able to remember what happened that could have led up to this. Until now.

It’s the sort of day that you dream of: a blue sky, a hot fist of sun and the sound of bees in clover, yet the air vibrates with unnatural tension. By late afternoon, the blue has a dense, uneasy quality, and wind sighs restlessly through the grasses. In the distance, a gathering of cloud hovers at the edge of the horizon.

It begins to rain, flattening ash on to the scorched grass. Nina lies, one leg bent at the knee — a dancer poised for flight. Her hand, palm up, is curled inward like an upended crab.

As a last curl of smoke dissolves, the sky clears and the blood in Nina’s veins thickens, and, it is as if the world, momentarily paused, begins to move on.

It’s early evening, and Denise is conscious of the rap of her heels against the hospital tiles. The sun, blood red, has stained the walls a dirty pink, and her stomach flutters at the prospect of visiting Heidi. She is tired, and her neck and shoulders throb with tension. The shift had begun at 2 pm, and, because she had been in the area, she was asked to assist at a road traffic incident where she had knelt at the kerbside supporting the upper body of a female driver as the door and roof were removed.

The woman had not been injured, but the impact of the accident or sheer opportunistic salesmanship had prompted her to try to sell Denise a new range of make-up designed for black skin, guaranteeing to keep the ravages of age away forever.

Because Denise was holding her head and could not justify putting her hand over the woman’s mouth, she had effectively been held hostage to the sales pitch for over an hour. Later, she had returned to the squad room to find someone had spilt coffee over the notes she’d spent the previous day compiling.

The call to visit Heidi has come late in the afternoon.

Walking beside her is Brenda Carver. Brenda has been a serving officer for over twenty years and will conduct the interview, such as it will be, because the doctors have already advised them that Heidi is still mute. Whenever Heidi’s case is mentioned, Denise feels a peculiar sense of inadequacy. This is the first time it has fallen upon Denise to meet Heidi face to face, though she has been involved behind the scenes from the beginning.

At times, she’s aware that she has been so engrossed in following leads and going over witness statements that she has lost sight of the victims altogether. But here, in the hospital, with the evening leaking in through the windows, and the peroxide scent barely masking the undernotes of shit and pain and illness, she is filled with the horror of it all. This is worth fighting for, even if the leads seem to be going nowhere, and their only witness is lying injured and without words in a hospital bed.

Article continues after advertisement
And even though the perpetrator has remained anonymous, she has, over the months, grown to hate him with a passion.

This case, more than any other, has challenged her general goodwill towards her fellow man. And even though the perpetrator has remained anonymous, she has, over the months, grown to hate him with a passion. She can understand better how it is possible for a member of the police force to mete out punishment behind the locked door of a cell. For weeks she has lived, dreamt, and absorbed the case until, at times, it is all that seems real.

A porter hurries past, pushing a vast trolley piled with hospital supplies, and the wheels rattle and echo like distant thunder. Brenda turns to her, raises her eyebrows wearily, and they wait for the lift doors to open with a clang before arriving on Level Four. Here, they negotiate yet another maze of corridors, hers and Brenda’s feet tapping out their individual rhythms, never quite in sync, like amateur tap dancers, until finally, they reach Martindale Ward. Denise feels a swell of anxiety.

“God, you could lose serious weight working here.” With a wetted finger, Brenda rubs at a pale spot on her uniform jacket and sighs. She seems unaffected by the forthcoming meeting.

Brenda shakes her head. “We had to appoint an appropriate adult. Hopefully, she’ll be there already.”

“Is there no other relative?”

“Not a one. Heidi is quite alone.”

The nurse at reception takes them to one side. “There’s someone waiting for you over there.” She nods to a row of plastic chairs. “I’ll call Dr Andrews.”

A woman rises from one of the seats, smoothing her skirt.

The ward is quiet. Somewhere a bed creaks and there is the distant ring of a phone. Eventually, a tall, heavyset man emerges from an office beyond and beckons them in.

“We thought we would try again,” Brenda says, reaching for her police identification and then abandoning it with a listless hand.

Dr Andrews frowns. “There’s no change, as I explained on the phone, and I think it’s highly unlikely that you’ll be able to interview her.” His face is grim.

“Does she remember anything?”

“If she does, she’s not disclosed it. As far as we believe, she has little or no recollection of what happened.”

“We have to keep trying.”

“Have you determined yet how bad the brain damage is?” Brenda asks.

Denise gets a sudden, horrifying image of Heidi’s battered skull.

Dr Andrews clasps his great hands in front of him. “It’s difficult to tell exactly until she’s more communicative.

Brenda shakes her head. The ward is warm. A fly buzzes lethargically on the ceiling, hitting the plastic shade of a yellowed strip light as though attempting a slow, repetitive suicide. Sweat trickles inside Denise’s shirt and stiff collar.

“Very well.” The doctor gets up from his chair.

“How is she in herself?” Denise asks and then feels foolish. She sees Brenda’s quizzical look and flushes. “I mean, I know she’s…”

Dr Andrew picks up a pen and twiddles it in his thick fingers. “Considering what happened to her, I would say fair. She’s strong and has youth and good health on her side. The physical injuries are healing well enough, although it will take a long, long time, and she will need skin grafts. It’s a pity her mother’s not able to visit. I think it would make a great difference. I’ll take you to her.”

He leads them through the ward where a clutch of beds support a motley group of patients attached to a variety of equipment. Past here, the corridor reveals several plain white doors.

“Does she know yet about Nina? Has anyone told her?”

“I don’t think so. For now, we are keeping questions to a minimum. I don’t think telling her that her best friend died at the scene will help her.”

“Nor that her sister is missing,” Denise adds, biting down on a spasm of pity.

The doctor pushes one of the white doors open with a squeak, and Denise gets her first glimpse of Heidi. Jesus Christ, she thinks.

The small body is swamped by the hospital bed. Above, the part of her face that is not bandaged appears to belong to someone much younger than thirteen. A purplish, angry scar bisects the left temple where the red hair has been shaved and is making patchy attempts at growing back.

With difficulty, Denise swallows her dual reactions of pity and horror. The room is deathly still. A drip is taped to Heidi’s wrist, and monitors flicker and tick on the wall behind. On a bedside table, a plastic jug of water sits beside a disposable cup and straw. There are no flowers.

“Hello, Heidi.” Dr Andrews gives her a warm smile. Heidi’s eyes focus on him, but her small mouth remains firmly closed. “These two policewomen want to talk to you.”

Heidi’s gaze skims them and then returns to the wall behind.

Brenda sits, tugging her chair closer to the bed. “Hello,” her tone is hopeful, “DI Brenda Carver, I came to see you before, remember? And this is DC Denise Gilzeen. As Dr Andrews told you, we’re police officers. We’re still doing everything we can to find the person who did this to you.” For a moment, it looks as if Brenda is going to put out her hand and touch Heidi’s arm, but, at the last instant, she withdraws it and tucks it away.

Brenda continues with a series of gentle question, but it’s clear that Heidi is not going to respond, and Denise realises that Brenda never really expected her to — that they are just ticking boxes, covering their bases. The silence deepens, and Denise begins to feel uncomfortable — the sight of Heidi’s small and damaged face against the white pillow, the heat and dryness of the air, and Brenda’s professional distance. It’s easier, Denise realises, to chase the villains than to witness their victims. Something squeezes at her heart.

“Heidi, can you look at me?” Brenda asks finally, but Heidi’s gaze remains obstinately fixed at some point behind them and at last, Brenda rises, gives a barely audible sigh and stands beside the bed. Denise and Brenda exchange glances.

“Goodbye.” Denise’s voice sounds rusty, and, just briefly, Heidi’s gaze flicks over, appraising her, and Denise catches a flicker of intelligence, like a light suddenly illuminated beneath murky water. It gives her a strange sense that Heidi is conscious of more than she is revealing, but as quickly as she sees it, it’s gone, and Denise is left wondering if it had been there at all. 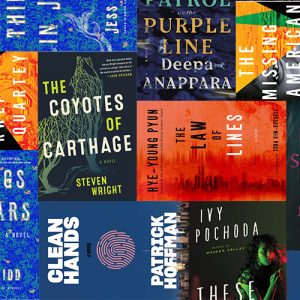 The Best Books of 2020 (So Far) Yes, it's only June, a mere six months into the year, barely past the solstice, but in those six months, as the world has faced...
© LitHub
Back to top