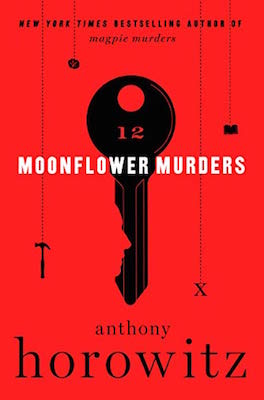 The following is an exclusive excerpt from Moonflower Murders, by Anthony Horowitz. Retired British publisher Susan Ryeland is bored in her new quiet life in Greece when she meets an eccentric family from back home, whose daughter is revealed to be missing, in connection to the real-life story behind a famous detective novel.

The Polydorus is a charming family-run hotel, located a short walk away from the lively town of Agios Nikolaos, one hour from Heraklion. Rooms cleaned daily, all with Wi-Fi and air con, some with sea views. Coffee and home-cooked meals served on our lovely terraces. Visit our website or find us on booking.com.

You have no idea how long it took me to write that. I was worried about so many adjectives bunching up together. Was ‘lively’ the right word to describe Agios Nikolaos? I’d started with ‘busy’ but then decided it might suggest the endless traffic and noise that were very much part of the place too. We were actually fifteen minutes from the town centre. Was that a ‘short walk’? Should I have mentioned Ammoudi beach next door?

The funny thing is, I spent almost all my working life as an editor and I never had any problem dealing with writers’ manuscripts, but when it came to a four-line advertisement on the back of a postcard I sweated over every syllable. In the end, I handed it to Andreas who read it in about five seconds and then just grunted and nodded, which, after all the trouble I’d taken, both pleased and infuriated me at the same time. That’s something I’ve noticed about the Greeks. They’re an incredibly emotional people. Their drama, poetry and music go straight to the heart. But when it comes to everyday business, to the little details, they prefer things to be ‘siga siga’, which translates roughly as ‘Who gives a damn?’ It was a phrase I heard every day.

Examining what I’d written along with a cigarette and a cup of strong black coffee, two thoughts crossed my mind. We were going to put the cards in a rack beside the reception desk, but since tourists would already be in the hotel when they picked them up, what exactly was the point? And more pertinently, what the hell was I doing here? How had I allowed my life to come to this?

Just two years away from my fiftieth birthday, at a time when I had thought I would be enjoying all the comforts of life that come with a reasonable income, a small flat in London and a full social diary, I had found myself the co-owner and manager of a hotel that was actually much nicer than I’d managed to describe. Polydorus was right on the edge of the water, with two terraces shaded from the sun by umbrellas and cypress trees. It had just twelve rooms, a young, local staff who were always cheerful even at their most haphazard, and a loyal clientele. We had simple food, Mythos lager, an in-house musician and perfect views. The sort of travellers we encouraged wouldn’t dream of arriving on one of those gigantic coaches I would watch inching along roads that had never been designed to accommodate them, on their way to the six-storey monstrosities on the other side of the bay.

What we also had, unfortunately, was dodgy wiring, impossible plumbing and intermittent Wi-Fi. I don’t want to slip into lazy Greek stereotyping and maybe I was just unlucky, but reliability was hardly a watchword amongst the people we employed. Panos was an excellent chef but if he argued with his wife, his children or his motorbike he would be a no-show and Andreas would have to take over in the kitchen, leaving me to host the bar and restaurant, which might be full but without any waiters or half-empty with too many of them. Somehow a happy compromise never seemed to materialise. There was always a faint possibility that a supplier might actually arrive on time but it would never be with the goods that we had actually ordered. If anything broke – and everything did – we would have hours of nervous tension waiting to see if the mechanic or engineer would show up.

For the most part our guests seemed happy. But we were running about like actors in one of those madcap French farces trying to make it all look seamless and by the time I collapsed into bed, often at one or two in the morning, I was so exhausted that I lay there feeling almost desiccated, like a mummy in a shroud. That was when I would be at my lowest, falling asleep with the knowledge that the moment I opened my eyes the whole thing would start all over again.

I’m being too negative. Of course it was wonderful too. The Aegean sunset is like nothing you will see anywhere in the world and I would watch it every evening, staring in wonder. No wonder the Greeks believed in gods – Helios in his golden chariot blazing across that enormous sky, the Lasithiotika mountains transformed into strips of the thinnest gauze, first pink, then mauve, darkening and fading at the same time. I swam at seven o’clock every morning, washing away in the crystal sea the traces of too much wine and cigarette smoke. There were dinners in tiny tavernas in Fourni and Limnes with the smell of jasmine, the stars twinkling, raucous laughter, the clink of raki glasses. I’d even started to learn Greek, working three hours a week with a girl young enough to be my daughter who managed to take the stressed syllables and verbs that weren’t just irregular but downright indecent and somehow make them fun.

But this wasn’t a holiday for me. I’d come to Greece after the catastrophe that was Magpie Murders. It was the last book I’d worked on and it had led to the death of the author, the collapse of my publishing company and the end of my career . . . in that order. There had been nine Atticus Pünd novels, all of them bestsellers, and I had thought there would be many more. But that was all over now. Instead, I found myself starting a new life, and frankly too much of it was hard work.

Inevitably, this had had an effect on my relationship with Andreas. The two of us didn’t quarrel – we weren’t the quarrelling sort—but we’d developed a way of communicating that had become increasingly terse and wary, circling each other like two prize boxers who have no intention of starting the fight. In fact, a full-throttle punch-up might have done us both good. We had managed to drift into that awful arena, so familiar to the long-term married couple, where what was left unspoken was actually more damaging than what was said. We weren’t married, by the way. Andreas had proposed to me, doing the whole diamond-ring-down-on-one-knee thing, but we had both been too busy to follow through, and anyway, my Greek wasn’t good enough yet to understand the service. We had decided to wait.

Time had done us no favours. In London, Andreas had always been my best friend. Perhaps it was because we weren’t living together that I had always looked forward to seeing him. We read the same books. We loved eating in . . . especially when Andreas cooked. We had great sex. But Crete had trapped us in an altogether different sort of arrangement and even though it had only been a couple of years since we had left the UK, I was already thinking about a way out, even if I wasn’t actively looking for one.

I didn’t need to. The way out arrived early one Monday morning with a smart-looking couple, obviously English, walking arm in arm down the slope that led from the main road. I could tell at once that they were rich and that they weren’t here on holiday. He was wearing a jacket and long trousers—ridiculous for the morning heat—a polo shirt and a panama hat. She had on the sort of dress that was more suited to a tennis party than the beach, a proper necklace and carried a neat little clutch bag. Both had expensive sunglasses. I guessed they were in their sixties.

The man came into the bar and uncoupled himself from his wife. I saw him examining me. ‘Excuse me,’ he said in a cultivated voice. ‘Do you speak English?’

‘I wonder if I might have a word with you, Miss Ryeland? My name is Lawrence Treherne. This is my wife, Pauline.’ 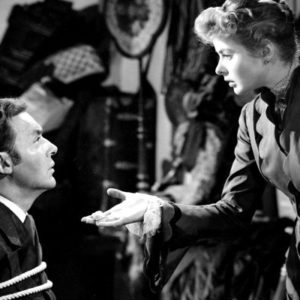 Women and Crime Writing: We’ve Always Been Detectives If you were worried that popular fiction for women has too often been about finding Mr. Right, well, that time is past. It’s...
© LitHub
Back to top