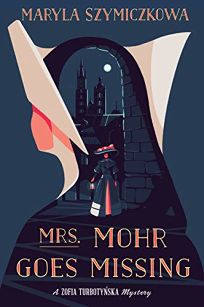 The following is an exclusive excerpt from Mrs. Mohr Goes Missing, by Maryla Szymickowa. Zofia Turbotynska, an energetic but bored socialite and professor's wife, becomes an amateur sleuth in this novel set in 1893 Cracow, when she learns that an elderly woman has gone missing from a nursing home run by nuns.

“Two bottles of wine against cholera,” she said to the shop assistant.

The newspapers were reporting new cases every day, and the Cracow Times had even started running a regular column headed cholera. So far, the names of faraway cities and towns had featured there, but ever since the ominous name Rymanów had been mentioned, a town just twenty-five miles away, Zofia had felt as if cholera were standing at the gates, and that it was time to protect herself from it. Unfortunately, her husband had his own tiresome medical opinion on how to treat this illness, which was that wine may well taste good, and might even fortify the organism as a whole, but wouldn’t keep cholera at bay; he droned on tediously about the comma bacillus and hygiene, insisting that the only cure was to build proper waterworks. But Zofia knew her facts: washing one’s hands was not half as effective as wine recommended by the medical authorities.

“Bilberry, made by Schwarz of Vienna or by Gutunić?”

“Also Vienna. It’s Dalmatian,” said the shortsighted assistant, raising the bottle to eye level and slowly reading  off the label, “‘containing tannin. Against maladies of the stomach and intestine.’”

“Perhaps the bilberry from Schwarz,” she replied graciously. Gutunić, she thought to herself, what sort of a name is that? Definitely not Viennese.

For though the Bible was full of wise and instructive stories, Judith’s problem-solving methods or Tobias’s medical practices were not applicable in daily life, where a person encountered troubles of every possible kind.

Franciszka stood silent; she too had her opinion on the matter of cholera, but was ashamed to reveal it, since being reproached on several occasions by her past as well as her present employers for repeating old wives’ tales. She had her own medical oracle that she heeded in every case: The Angel’s Aid for Defense and Protection in Dire Need. If asked which book was the most important in the world, as a good Christian, she would unhesitatingly have answered “the Bible.” But were one to plumb the deepest recesses of her heart, there one would find The Angel’s Aid. For though the Bible was full of wise and instructive stories, Judith’s problem-solving methods or Tobias’s medical practices were not applicable in daily life, where a person encountered troubles of every possible kind.

And here The Angel’s Aid was a most useful source of information on techniques for taming domestic animals; infallible methods for dealing with freckles, vomiting, flies, cramps, and fear of water; the best infusion for causing one to remember everything one reads or hears; how to be rid of warts, how to make a barren marriage fertile, and how to cope with prolonged rain and thunder.

Though the book did not express itself with particular precision on the question of cholera, Franciszka persisted in her research, and sometimes fell asleep while leafing through its greasy pages. So far, on learning that cholera was accompanied by diarrhea, she had concentrated on methods for treating white diarrhea and bloody diarrhea. If afflicted with the former, one must take a piece of red clay the size of a hen’s egg, dry it in the oven, grind it in a mortar, and then dissolve and boil it in a quart of river water, which must be scooped in the direction of the current. To remedy the latter, one drinks two spoonfuls of powdered blueberries dissolved in warm wine, followed by fatty beef broth, then takes care to keep warm and rub the umbilicus once an hour with nutmeg oil. She had the nutmeg oil, the blueberries, too, and beef could always be bought. She was prepared. Sometimes, as she nodded off, she’d imagine the glorious scene in which the professor and his wife would be fading fast, he raving about the waterworks, she letting a glass of bilberry wine slip from her hand; but by applying the recipes from the mocked and despised Angel’s Aid, Franciszka would save their lives by feeding them blueberries dissolved in warm wine and rubbing their navels once an hour with nutmeg oil, in the process earning herself not only their undying gratitude, but also respect for her little book.

“And something for tonsillitis. Yes, and some mustache pomade as well.”

“Mustache pomade? For Dr. Turbotyński? Unfortunately we’re out of stock, but you can try Wiszniewski’s on Floriańska Street . . .”

“For Professor Turbotyński. My husband is now a full professor of medicine at the Jagiellonian University,” she said, pronouncing each syllable even more slowly and precisely than usual. “These two months past.”

“My most sincere apologies, madam.”

“A trifle,” she said, laughing insincerely, “a mere trifle. How much do I owe you?”

In fact Ignacy’s professorship was certainly not a trifle, but the long-desired crowning of a consistent climb up the rungs of Cracow society. For Zofia Turbotyńska, née Glodt, was not a native of Cracow. She was born and raised in the provincial city of Przemyśl, not counting the year she had spent at the Order of the Blessed Sacrament convent school in Lemberg, which was not a happy memory. Having received a thorough domestic education thanks to the invaluable Miss Buchbinder, she had married Ignacy Turbotyński—of noble descent, he came from a respectable though not affluent family resident in Cracow for generations—and ever since, she had done everything in her power to be sure that no one would think of her as an outsider. In fact, with time, she too had virtually forgotten her own origins. She had adopted all the habits of the Cracow bourgeoisie, and stuck to them so strictly that her husband sometimes couldn’t restrain a compassionate smile: she shopped at the Cloth Hall market, bought all her colonial foods at Antoni Hawełka’s store, went to High Mass at St. Mary’s Basilica, and the only newspaper she read was the Cracow Times. She could be tested on the family connections of all the greater houses to several generations back, and as for gossip, within the scope of Planty Park there was no one to rival her.

They left the pharmacy, and had just reached the front door of Peacock House when the first raindrop fell on the bow atop Zofia’s hat; they were saved. And so were the twenty cents they hadn’t spent on a cab.

“Good morning, Ignacy,” said Zofia, facing the mirror to take off her gloves and lay them in a Japanese black lacquer box.

A moment of silence followed; in the gap in the door she saw her husband, or rather a small part of him: the shiny bald patch on the top of his head, poking out above the open newspaper, and his fingers holding its edges. On the table lay a pair of scissors and a couple of cuttings.

“King Humbert fell off his horse,” said Professor Turbotyński at last, “but luckily he wasn’t injured.”

“How splendid,” replied Zofia with genuine joy, as if the news involved a good friend; she was always interested in hearing about the crowned heads, even the Italians.

“He was much luckier than the Hungarian envoy, Mr. Bokros, who fell out of a window while trying to catch a bottle of slivovitz,” added her husband without looking up. “Well, as I always say, the immoderate consumption of alcoholic drinks is bound to end in tears,” said Zofia categorically. 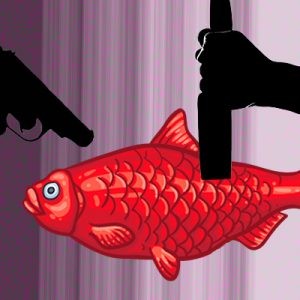 Red Herrings in Contemporary Crime Literature When plotting a tale of suspense, any writer worth her salt understands the importance of distraction—intriguing details...
© LitHub
Back to top