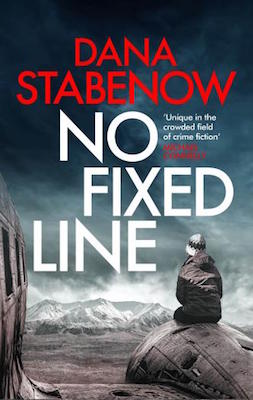 The following is an exclusive excerpt from No Fixed Line, by Dana Stabenow. On New Year’s Eve, as a blizzard continues to rage outside, retired ex-Trooper Jim Chopin is notified that a plane has gone down in the Quilak mountains and is sent to go find the remains. But he finds, instead, two children who don’t speak English. But back home, PI Kate Shugak receives an accusation from someone who should be long dead.

The sound of the engine increased to a roar as it passed overhead and then as suddenly ceased. A second later a booming crash made them both jump. Even above the wind they could hear tearing metal screaming in loud, abruptly truncated protest.

Five seconds could not have passed. To Matt it felt like an hour and even as he was up out of the pool he was cursing himself for his slow reaction. The door banged open and he tore into his clothes, yanking on everything from the skin out including his down bibs and parka. Next to him Laurel was pulling on her own. “Do you think anyone could have survived that?”

“Won’t know until we look. Not likely, though.” He stuck foot warmers to the bottoms of his socks and made sure she did, too, before stamping into his Sorels.

“Not very far, but we will as far as we can.” He put hand warmers into his down mitts and pulled them on.

“We brought the snowshoes, right?”

“On the trailer. Part of the survival kit.” Although he doubted either the terrain or the weather would allow their use. Bulked up to twice their natural size by their Arctic gear they lumbered out of the house and went around to the side where the sled and the trailer were parked next to the woodpile. He yanked off the tarp while she climbed on and pressed the starter. That blessed engine came to life at a touch and he sent up silent thanks to Yamaha engineers. He clipped the first aid pack to an eyebolt screwed into the inside of the trailer. Laurel scooted back and he climbed on the seat in front of her. They slipped goggles over their parka hoods. Matt took one precious moment to run over everything they’d done since they’d heard the crash, trying to think of anything he’d forgotten. It was always the one thing you didn’t bring that you desperately needed at the scene.

The skis had frozen into the snow but they only had to rock the snow machine a few times before it came loose. Matt gave it some gas, a very little, and they left the negligible shelter of the cabin and crept slowly but purposefully into the center of the canyon, the wind howling into their faces. It increased in volume and in noise and seemed to be trying to shove them off the sled and the sled over on top of them. “Hold on!” Matt said, and stood up to lean forward, shifting his body weight out over the skis. The light cast by the sled’s lamp was obscured by fine, dense snow blowing horizontally across their path, only briefly and sporadically illuminating the homicidal rocks, ridges, and outcroppings that obstructed their way. Matt kept their speed at just above a crawl, hoping to minimize the damage if they did collide with a chunk of Quilak granite. All too soon the canyon narrowed and the ground rose so steeply that the snowmobile’s engine rose to a protesting whine. Matt was just about to put it into neutral and break out the snowshoes when Laurel said, her voice faint against the wind, “Look!” Her mitt pointed over his shoulder.

For a brief lull the snow cleared and revealed what he had taken for another small outcropping but was in fact the vertical stabilizer of an airplane. It loomed up momentarily out of the darkness and then the snow closed in again. He goosed the gas and the sled’s engine yowled in protest but it moved forward far enough that the headlight caught the one thing that was not like any other in this roaring wilderness. From what he could see, which wasn’t much, the rudder had more or less survived the impact. One of the horizontal stabilizers was pretty chewed up while the other was completely gone. The fuselage forward of the tail extended maybe eight feet. The snow was coming down so hard that in another ten minutes they might have passed it by if the wreckage hadn’t partially blocked what was left of the little canyon before it turned into a mountain ridge.

The very last thing he wanted to have to deal with in this blizzard was a fire.

“Scooch back!” She did and he didn’t step off the sled as much as roll off it, trying to spread out as much of his weight as possible. He didn’t know how firm the snow here was, he didn’t want to posthole through it if he didn’t have to, and he didn’t want to break out the snowshoes until and unless he absolutely had to. He rolled over until he was just below the wreckage, and then he squirmed forward on his elbows and knees until he bumped his head against the fuselage. In spite of all his Arctic gear, in spite of the hot pads in his boots and mitts, the cold was beginning to make itself felt. He paused, trying to snatch some of the oxygen going by him at what felt like the speed of sound. He couldn’t smell any fuel so the wings were probably not nearby, which was at least a relative mercy. The very last thing he wanted to have to deal with in this blizzard was a fire. He turned over and used his heels to push himself to where he could grasp the ragged edge of the fuselage where it had torn itself from the rest of the aircraft. He pulled himself alongside it and around it and then through it, with the stray thought that he wished the sadist who presided over his annual fitness certification could see him now.

The fuselage seemed to be pretty well wedged into the cliff face, and he walked his elbows forward until his head was partially sheltered from the storm and squinted around. It was dark inside and fast filling up with snow. A headlamp. Yeah, he sure could have used a headlamp about now. There was a flashlight back in the first aid kit in the trailer instead of in his pocket, too.

By some freak of physics the floor of the fuselage was almost level. He could make out the vague outline of a single remaining airplane seat. Wires and strips of interior laminate dangled from places where the bulkhead had ripped open and what looked like stuffing, probably from one of the seats. He wiped the snow from his goggles. And there, in the back—

He tested the edge of what was really just some ribbing sandwiched between a couple of pieces of aluminum. It seemed steady enough, like maybe it wouldn’t shift beneath his weight and roll down the side of the canyon and over himself, Laurel, and the sled, in that order. And Kate Shugak’s cabin, let’s not forget that possibility, the one that might actually get him killed. He got his feet beneath him.

The wreckage held steady, wedged between the snow and the rock. He duckwalked forward, one cautious hand and foot at a time.

They were kids, belted together into the last seat remaining on the aircraft, which astonishingly had remained bolted to the floor. Let’s hear it for the FAA and strict aviation safety regulation enforcement. They were both limp, hanging from their seatbelt, and frost was already forming on their faces and clothes. He stripped the mitt from his hand and felt for pulses. Faint, but there.

The boy was wearing a T-shirt and shorts, the girl a sundress with a cardigan over it. Neither of them was packing much in the way of body weight. He had to get them down to the cabin and into the warm.

He took one precious moment to clear his mind and think it all out before moving into action. He stripped off his parka and laid it out on the floor. He cut the seatbelt with his belt knife and rolled them inside the parka side by side. He cut lengths from the dangling wiring and used it to tie the parka tightly around them, and then more to fashion a rope which he tied to the wiring around the parka in a makeshift three-point harness. He shoved them and the parka and the wiring harness out of the fuselage and into the weather. All he had on beneath the parka was a T-shirt and the bib of his Carhartts and the snow stung his exposed skin with a fury that made him feel like it was drawing blood. Yeah, should have put his hoodie on under his parka, too.

The wind was blowing so hard that it pushed the parka full of kids sideways over the slope of snow instead of straight down to the sled, but Laurel had seen what he was doing. She had put on her snowshoes while he’d been inside the wreck and she stepped out and snagged the edge of the parka as it went by. He wiped his goggles again and let himself down onto the snow, too tired now to be careful. His foot promptly sank in up to the hip.

“Fuck.” He knew his fatigue signaled the onset of hypothermia, but he managed to pull himself out onto his belly and more or less swam over the surface of the snow to the sled. Laurel helped him put the kids in the trailer and shoved him in after them. She climbed on the sled and they started to move. He realized that during the time he’d been inside the wreck she had also turned the sled around so that it was pointing downhill.

I’m so keeping her, he thought.

The journey back was quicker than the journey up, and they got the kids into the cabin in short order. Matt collapsed into the single chair and started to shake. Laurel jammed as much wood into the stove as it would hold, rolled the kids in front of it and then went back outside to shut off the sled and tarp it up. Back inside she stripped off her Arctic gear and then had to find a pair of wire cutters to get the kids out of the parka.

“N-n-no unnecessary m-m-movement.” His teeth were chattering so hard he could barely get the words out. “Are-are-are their clothes wet? Is the p-p-p-parka?” 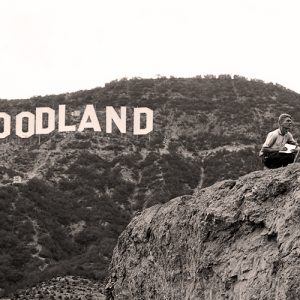 Golden Age Hollywood was Full of Ex-Cons A good publicity blurb knows what to omit. Take the item in The Film Daily on January 26, 1934 announcing that Robert Tasker...
© LitHub
Back to top