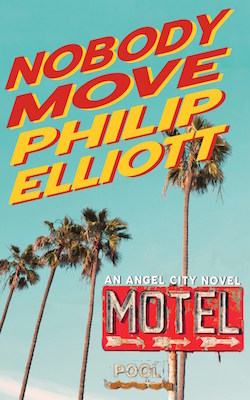 The following is an exclusive excerpt from Nobody Move, the new comical mystery from Philip Elliott. A debt-collector on the lam, an enraged crime boss, a woman searching for her missing friend, an ex-assassin thirsty for revenge all cross paths in Los Angeles, with bloody consequences. And a determined young detective doesn't have long to figure out what has happened, before it happens again.

Something was off. Everything was off. Eddie could feel it. Felt it ever since he woke up this morning, in fact, that sense of something, everything, being . . . off. Not that anything had been right to begin with. Fucking season was off, that was for sure. Summer in L.A. and rained every day for the past two weeks. When Saul had called his cell right as he’d sat down with some shitty Chinese takeout for a relaxing night of shitty TV and said “Eddie, I need you to make a house call. Floyd will pick you up in thirty” and Eddie said, “What, right now? What the guy do, shit on your lawn?” and Saul didn’t even answer, just hung up, Eddie knew that something was off about the whole thing and his sense of foreboding with him since breakfast had been very fucking apt indeed. Now, walking through a hallway toward the guy’s condo, about to wave a gun around and threaten murder, the sensation had only increased.

“We just putting the fear into him,” Floyd said. “Owes big. Boss said Bill always pays, but he late and we gotta scare his ass.”

“Why such short notice?” Eddie said.

“Bill made a surprise visit to town, that’s why. I watched a movie with the wife last night. No Country for Old Men. You seen it?”

“Watch that shit. There’s a hitman, looks like the devil if the devil was a cowboy. Cold motherfucker. Don’t even use a normal gun. Instead uses a cattle gun. A fuckin’ cattle gun. Carries around a tank of gas.”

They reached Bill’s door and faced each other.

“Point is, this hitman has a thing for fate. Flips a coin and makes you choose if you gonna live or die. And that’s it. That’s the only chance you got with this nigga. He don’t care about money, and he don’t care about what you have to say. He flips that coin, you live or you die.”

“Not that part, the coin toss. Everyone gets an equal chance.”

“Yeah, but you can’t buy your way out of it with this man, or reason with him.”

“So he’s got principles,” Eddie said.

“You probably wouldn’t make sense to him.”

“There’s every kind of person in this world.”

Floyd faced the door. “I ever meet a motherfucker like that, I got some questions. You ready?”

Floyd pounded on the door.

It opened to a fat man in a silken dressing gown, his hairy chest exposed, a gold chain dangling over it. A thick mustache sat like a tarantula above his lips.

“You must be Bill,” Floyd said.

“The Angel of Mercy.” Floyd shoved Bill into the apartment, the man slipping on the tile and falling onto his ass, a pale testicle flopping out of his boxer shorts. “Or the Angel of Vengeance. Depends whose door I’m knocking on.”

Eddie couldn’t help smirking. The man should be on the stage.

Floyd stepped forward as Bill crawled backwards through the kitchen toward the living area. An aquarium built into the wall on the right cast a shimmer across his face, a dozen neon fish swimming in circles inside it like a gang of simpletons.

“What are you talking—”

“What city we in right now, Bill?”

“And who’s God round here?”

Realization dawned on Bill’s face. “I’ll get the money.” Pulling himself onto the sofa. “That’s what I’m here for, in L.A. Collecting a payout. I just need a couple more days.”

“Oh, you’ll get the money? Well shit, why didn’t you say so? You hear that Eddie? It’s all good, man gonna get the money, our work here is done.” Floyd took a step away from Bill and spun, fist raised. The blow hit hard: Bill slid off the sofa, little moans spilling out of him.

“Listen to me you redneck motherfucker and listen good,” Floyd said, “’cause if I have to repeat myself, I’ll fuck up the other side of your face too. You ever try take a piss with two eyes swollen up like balloons, Bill? You can’t see the toilet, you’re hitting the floor, the walls, the fuckin’ ceiling. It ain’t fun.”

“I don’t have the money right now, but I can get it tomorrow.”

“Didn’t I just warn you about making me repeat myself?” Floyd sighed, and pulled his pistol out of the waist of his blue suit. Bill shivered like a canary.

That sense of foreboding came over Eddie again. He could feel himself getting paranoid, thinking what if it meant something terrible, grim reaper with a bony hand on your shoulder, all that shit. It wasn’t the thought of dying that scared him—when you’ve been breaking into people’s homes and moving product and waving guns around every day for two years the idea of death becomes about as scary as a dinner party with strangers—it was the thought of this being all he ever amounted to: Eddie Vegas? Yeah, I remember him. Low life criminal, right? Used to work for Saul Benedict, run around pretending to be a thug? Oh, he’s dead? Fuck ’im, he had it coming.

Floyd said, “You know, Bill, it’s been a long time since I killed somebody for the first time.” Observing the gun in his hand, looking sad and contemplative. More theatrics. “The shit just don’t bother me no more. I can shoot a nigga and walk straight into McDonald’s, get some fries and a Coke, enjoy myself. But that don’t mean I like killing people. It’s a pain in the ass, Bill, to be straight with you, disposing of the body, cleaning the place, checking the newspapers . . .”

Eddie watched Bill. If any more blood left his cheeks the man would collapse.

“But at the same time,” Floyd continued, “sometimes the best option is to get rid of the problem, remove it from your life, ’cause it just ain’t worth the headache . . .”

A female voice drifted from somewhere to the right, so quiet Eddie might have imagined it. He frowned. No, there it was again; almost inaudible, but there.

Floyd looked back at him. “Hear what?”

“You got someone in here with you, Bill?” he said.

Floyd moved toward the closed door to the right of the living area. Eddie took his pistol out of his jeans and pointed it at Bill.

Floyd opened the door and the woman’s voice spilled into the room like a song. She was moaning vigorously, without a doubt being fucked in there.

“What in the hell . . .” Floyd said, staring into the room open-mouthed.

When Eddie faced Bill again the fucker was up and running at him, a wild determination in his eyes and the dressing gown flapping madly behind him.

“Fuck,” Eddie said, and before he could make a decision, before he could even think about it, his finger tightened around the trigger. Bill’s head flung backwards and his body followed, thumping against the floor. He lay sprawled on his back, blood dribbling out of the hole in his skull where an eye had been seconds before.

A moment of silence.

Floyd said, “You best have a good explanation for that.”

Eddie just looked at him. The woman’s moaning continued.

“Fuck you shoot him for?”

“Ran at you? Why didn’t you just hit him? Look at his fat ass—this ain’t some Bruce Lee motherfucker.”

“Do I look like I have that kinda dough?”

“You better start looking like it ’cause Saul ain’t gonna shrug his shoulders and say ‘Shit happens’ over fifty Gs.”

Floyd tucked the pistol into his trousers. “Help me move his fat ass into that room while we figure out how to get him down the elevator.”

“What was in there?”

Floyd smirked. “See for yourself.”

Floyd grabbed Bill under each arm. “Get his legs.”

Eddie lay his gun on the coffee table, his hand shaking as the adrenaline faded and cold reality took its place. He lifted Bill’s heavy legs. Floyd shimmied backwards and Eddie shuffled after him, Bill’s bloody face at his crotch. This close the man reeked of sweat and smoke. Eddie couldn’t look at him.

They’d made it halfway when keys jangled in the front door of the apartment. They froze, Bill swaying between them.

The door opened and a young woman entered, humming to the music blasting from her headphones. She closed the door, placed her handbag on the marble countertop, breezed over to the fridge, and withdrew a carton of orange juice.

Eddie looked at Floyd, who looked back at him.

The woman took a swig from the carton and turned. Her eyes found Eddie and doubled in size. The juice hit the floor. Nobody moved.

The woman bolted for the door. Floyd went after her, Bill’s skull thumping against the tile. The woman made it into the hallway for a grand total of three seconds before Floyd dragged her back into the apartment, hand clamped over her mouth. She kicked and screamed and thrashed her arms about.

“Ow,” Floyd said, retracting his hand from her face as she flung her limbs at him. He punched her in the head and she crumpled to the floor. “Bitch bit me.”

The woman lay sprawled on the tile, barely conscious. They observed her for a moment.

“You know what. Find something to keep her quiet with case she wakes up and starts screaming. I’m gonna call Sawyer.”

Eddie found duct tape in a kitchen drawer. The woman came to life as he stuck it over her mouth and immediately tried to scream, her fingers clawing at him. He removed his belt and tied her hands behind her back, then pointed the gun at her and made her kneel on the floor beside Bill.

Her eyes, screaming out of her head, terrified him. She couldn’t have been older than twenty.

“Was it right when you did him?” Floyd nodded toward Bill.

“You wanna live the rest of your life in a six-foot prison cell? ’Cause I’ll die before I go there again.”

The woman screamed from behind her duct-taped lips.

Floyd said, “Best to use the same gun. Give it to me.”

Eddie’s heart hammered on his ribs. He looked at the pistol, a Smith & Wesson SD9, like an anchor in his fist.

“Shut up,” he yelled. The gun rose and stared at her.

She went stiff as a surfboard.

Eddie could feel Floyd’s gaze on his neck. A sour taste filled his mouth, his hand sliding on the coarse grip.

Eddie stared into the woman’s eyes. She looked familiar, the kind of young woman you’d pass on the street and think of as smart and confident and cute all at once.

There was no other way. Eddie stilled his breath, said “I’m sorry,” and squeezed.

Your Guide to the Essential Crime TV of September 2019

The Last Days of Audrey Carey 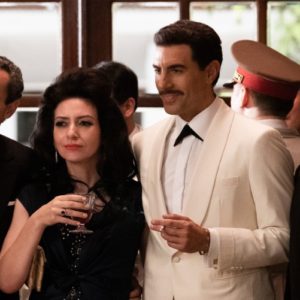 Your Guide to the Essential Crime TV of September 2019 They say it’s the Golden Age of Television, but they also say: not all that glitters is gold. That’s why we’re here,...
© LitHub
Back to top