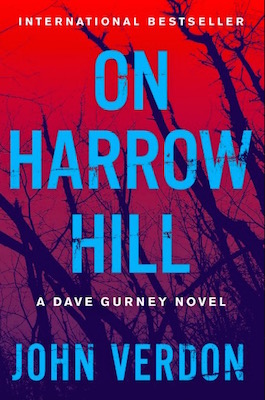 The following is an exclusive excerpt from On Harrow Hill, by John Verdon. Retired NYPD detective Dave Gurney is faced with an impossible mystery when Angus Russell, his town's wealthiest resident, is found brutally murdered... and all signs point to a man who died one day before. And whose body is now missing from the morgue.

Although their partnership had lasted only ten months, Gurney knew more about the personal life of Mike Morgan than that of anyone else he’d worked with in his twenty-five years in the NYPD. From the day he was assigned to replace Gurney’s retiring partner in the homicide division, Morgan had treated him as a confidant—with the result that Gurney had learned more than he wanted to know about the man’s longing for approval from his revered cop father, his reckless relationships with women, his waves of paranoia.

He’d also witnessed Morgan’s obsession with superficial orderliness, especially punctuality. So it was no surprise when, at exactly 3:59 p.m., a black Chevy Tahoe began making its way up through the low pasture toward the house.

Gurney went out through the mudroom and opened the side door. The cool air carried the mixed scent of wet snow and spring grass. He watched as the big SUV with a circular LARCHFIELD POLICE DEPARTMENT emblem on the door pulled in beside his Outback.

Morgan got out, looking around anxiously at the fields and hills, then walked the path between the house and the raised asparagus bed. He was wearing neatly creased black pants and a gray dress shirt with a three-star chief’s insignia on the starched collar. Although the man still had the trim body of an athlete, his stride was stiffer than Gurney remembered, and the worry lines on his face seemed to have deepened.

As he reached Gurney, he extended his hand, smiling a little wildly.

“David! Wow! So good to see you. Long time, eh?” His grip was unpleasantly tight, then suddenly looser, as if he’d caught himself in a bad habit.

Morgan took a deep breath and blew it out gradually through puffed cheeks, stepping back and looking around again at the hills and fields. “You’re really out here, aren’t you? Not another house in sight. You okay with that?”

“I mean, this is like the backwoods. Not a soul around. How much land do you have?”

“About fifty acres. It was a farm once. Mostly old pastures. Some small quarries. Cherry and maple thickets. Lots of trails.”

Morgan nodded, not really listening, looking around yet again. “You have any snakes?”

“Not really. Nothing poisonous.”

“I hate snakes. Always have. I read once about a guy putting a rattlesnake in his neighbor’s mailbox. Can you imagine?”

Gurney stepped back from the doorway with a half-hearted welcoming gesture. “You want to come in?”

Gurney led him past the mudroom into the kitchen and over to the round pine table by the French doors. He gathered up his notes for the academy lecture and put them aside.

Morgan shrugged. “Whatever you’re having.”

While Gurney busied himself with the coffee machine, Morgan remained standing, looking first around the room, then out through the glass doors.

“I appreciate this. Letting me come here on such short notice.”

When the coffee was ready, Gurney filled two mugs and brought them to the table. “Milk? Sugar?”

Gurney sat in the chair he usually occupied for breakfast and Morgan sat opposite him. Gurney took a sip of his coffee and waited.

Morgan grinned nervously and shook his head. “I thought about this all the way here, but now . . . I’m not sure where to begin.”

Gurney noted that the man’s fingernails were still bitten to the quick. They had always looked like that, the swollen fingertips overlapping the stubs of the gnawed nails. Unlike most people afflicted with that compulsion, however, Morgan had never engaged in it in public. It reminded Gurney of his mother’s combination of public dieting and seemingly inexplicable obesity.

Morgan wrapped his hands around his coffee mug. “I guess the last thing you knew about my situation was that I left the department.” He hesitated, making it sound like a question.

“That all came together nicely. You know that Bartley let me hang in until I hit twenty years and could get my pension, right?”

Gurney nodded. Considering the mess he’d gotten himself into, Morgan was fortunate to have been given such a gentle exit.

“That gave me a little breathing time to look around. I heard through the grapevine there was an opening for a head of security at a small upstate school, Russell College, in Larchfield. I applied, I interviewed, I got the job.”

“Nothing negative reached them about your NYPD problem?”

“Apparently not. But that’s understandable. There hadn’t been any official disciplinary action. On the record, I’d simply retired. Twenty and out.” Morgan stared down into his coffee for a moment, as though it contained some image from his past, before continuing.

“The college job was fine. Respectable, decent salary, et cetera. But a year later the Larchfield police chief resigned. It was suggested that I’d be a logical replacement.” A flicker of pride appeared in his eyes. “I went through an interview process with the village board, and two weeks later I had gold stars on my collar.”

“More than kind of.” Gurney considered which of the questions that came to mind to ask first. He chose the mildest. “What does the job entail?”

Morgan paused, staring again at his coffee. “It’s a strange place, Larchfield. Crime-free, tons of money, not a single wilted petal in the village flower beds. A living, breathing painting of upscale perfection.”

Morgan’s mouth stretched into a sour expression. “Larchfield has always been under the thumb of a super-wealthy family. The Russells. Three generations ago they owned all the land in the area, which they gradually sold off with deed restrictions that allowed them to control everything from the styles and colors of the houses to the composition of the tarmac in the streets. There was a struggling college nearby—which the Russells saved and expanded with big endowments, with strings that ensured their control of it in perpetuity. And that isn’t the half of it. For over a century all the public institutions of Larchfield—from the library to the local theater to the two-hundred-acre park—have prospered through the benevolent dictatorship of that family.” He paused. “There isn’t much that happens in Larchfield without Russell involvement . . . and Russell approval.”

“Sounds like a private kingdom. Who’s the current king?”

“Ah, well, that’s the thing. Until last night, it was Angus Russell.”

“How was he was murdered?”

“His right carotid artery and right jugular vein were both severed—with one cut. As he was coming out of his bathroom.”

“A single slash. Clean and deep. Probably between three and five in the morning, according to the ME.”

“Who found the body?”

“The wife and the housekeeper—but in different ways. The wife, Lorinda Russell, says she came down to breakfast around eight. She made herself some tea in the kitchen, then brought it into the breakfast alcove at the end of the main dining room. She sits down and starts checking her phone. Then she hears this sound. A little ptt, is the way she described it. Then she hears it again. Then again. She looks around and sees a dark red spot on the beige carpet next to her. As she’s watching, another drop falls on the same spot. She looks up. There’s a pendant light fixture in the ceiling on the end of a gold chain, and there’s some kind of liquid dripping down the chain from a dark red spot on the ceiling. At first, she has no idea what she’s looking at. Then she realizes what it is. And she starts screaming.”

“She told you that she realized it was blood?”

Morgan nodded. “She seemed to have trouble saying the word. Claims the sight of blood, even the thought of it, has made her sick ever since her father fell off a tractor and got ripped up by a hay baler. The housekeeper, Helen Stone, was outside the alcove window, giving instructions to one of the gardeners. Stone hears the screaming and comes dashing into the house. She sees the blood coming through the ceiling, and she runs up the staircase to Angus Russell’s bedroom, which is directly above that breakfast alcove.”

“Angus and Lorinda have separate bedrooms?”

Gurney shrugged. “Magical power of money. So the housekeeper went into the bedroom and found the body? What about the wife?”

“She went up behind the housekeeper. Went as far as the bedroom door, took a look inside, and collapsed. Stone went right in. She found the body, along with ‘more damn blood than you could imagine having been in one old man’—is the way she put it.”

“All from the neck wound?”

“With one exception. His left forefinger had been cut off, so there was a separate puddle of blood around that hand. No idea yet what its significance might be. I’d say Angus got up in the middle of the night to use the shared bathroom between the two bedrooms. When he came back into his room, someone was waiting for him. One hard slash across the right side of the neck with a super-sharp blade. Best guess is that Angus made a half-turn away from the attacker and toppled headfirst over a chair. He ended up in a strange position, forehead on the floor, stomach and thighs slanting down across the seat of the chair, legs angled up in the air behind him. Like a sick joke.”

The comment reminded Gurney of a macabre moment in the White River murder case—when a severed head, with one eye closed as if it were winking, came rolling out of a crime scene, sending an on-site TV reporter into a state of catatonia. But he had no taste for dwelling on gruesome deaths. He preferred to focus on practical steps.

“So the lord of the manor got his throat cut and a finger amputated, assailant unknown. Were you able to lift any useful prints?”

Morgan shifted in his chair, still gripping his coffee mug. “The only clear prints our tech found—other than those of the victim, his wife, and the housekeeper— were ID’d by AFIS as belonging to a local named Billy Tate. If this were a normal case, he’d be our prime suspect. He and Angus hated each other, had a bad history together, including death threats. But none of that matters now.”

“Tate was killed in a freak accident the night before last.”

“We’re trying to sort that out. If this isn’t some kind of a screwup, then Tate must have been in Angus Russell’s bedroom at some point. Exactly when, we can’t be sure. No precise way to date the prints. But we know it couldn’t have been last night, because last night Tate was laid out in a coffin in the local mortuary.”

Gurney knew that determining when and why an enemy of the victim had been in his bedroom would be an investigative priority, probably the key to solving the murder. At the moment, however, there was a simpler question on his mind.

Oddly, it was Morgan who put it into words first. “At this point, you’re probably asking yourself what made me so desperate to see you.”

The Cook of the Halcyon 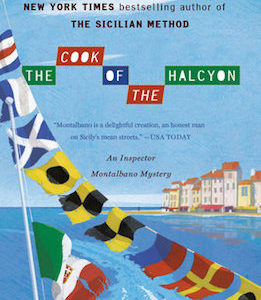 The Cook of the Halcyon “Can I come in?” asked Fazio. “Yeah, come on in. So you’re only getting back now?” “Chief, would you believe...
© LitHub
Back to top