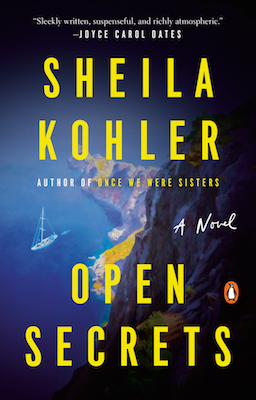 The following is an exclusive excerpt from Open Secrets, by Sheila Kohler. Michel, a Swiss banker, is shocked to learn that his wife Alice has a secret, and when he discovers it, he turns to a Russian client for help. But he does not realize yet that his actions will put everyone in danger—himself, his wife, and their fourteen-year-old-daughter.

When Alice closes the door on their bedroom that night, Michel goes to his study, throws his book on his desk, gathers up his papers, and paces up and down. He is suddenly full of energy, though it is late, after ten o’clock. He is imagining all the terrible secret words Alice must have whispered to Luigi, the same secret words she has used with him. He needs to move. He holds himself erect, clenching his jaw, grinding his teeth. He finds himself reciting certain passages from Luigi’s letter; better to be angry than miserable, he tells himself. How little we know about ourselves, he thinks. Where can he go? he wonders. What can he do? He cannot stay here.

He picks up the telephone, calls the Russian at his villa, and asks if they can meet. He says he needs to talk to someone. For some reason he thinks the Russian will understand, and indeed the man immediately invites him, tells him to come to his house.

Michel lights a cigarette and then leaves it in the ashtray to burn before he leaves.

Fire and fury, he thinks as he drives in the dark, taking the long way, the sea route to the villa in Nice. He opens the windows, letting the warm night air into the car. The movement makes him feel better. If I can just keep moving, moving.

In the state he is in, it is wiser to leave, he considers. He imagines Alice with a pillow over her beautiful face. He glances at himself in the car mirror and smooths down his hair, which is curling in the damp air.

He has been to the Russian’s house before, though never at night. He remembers walking out of the shadows of the study on the second floor, standing blinking on the balcony in the bright light, looking down at the group of men sitting around the table on the lower‑floor terrace by the pool and seeing a pink hydrangea in a pot in the middle of the table and the glint of a gun. Could he have imagined such a thing?

As he drives under the olive trees that line the entrance to the grand villa, their silver leaves lit up by lights at their bases, he wonders if this is wise. What is he doing here? Why is he driving to the house of a stranger? What does the Russian mean to him? he wonders. Somehow in his state of raw fury he feels an affinity with the man, who, he is almost certain, has connections to the Russian Mafia. He thinks of him saying, “It’s hard to say how much Russian money comes from organized crime and how much came from what was the KGB.”

When Michel pressed him to read the fine print on a contract he wanted him to sign, the Russian waved him away. “But you need to know what our fees are, how much we will be charging you,” Michel protested.

“I don’t need a contract. I trust you. You’re my friend. We will make money together,” he said, and gave him a hug.

When he rings the doorbell it is the Russian himself who welcomes him, throwing an arm around his shoulders.

“Come on in. What a nice surprise!” he says warmly. He seems genuinely pleased to see Michel. Perhaps he is lonely—a lonely man? So rich and not ugly, but lonely. Michel imagines the Russian’s lonely life with all the secrets he cannot share. He has mentioned a wife, perhaps several wives, even a child—what was the name: Sasha or Sergei? Michel doesn’t remember—but none of them seem to be around, part of his daily life.

The Russian is in khaki shorts and not wearing any shoes, and his blond hair is disheveled, Michel notices. He wonders if he is already drunk as they walk side by side through the ornate hall, with its gold candelabra, the mauve orchid, and the black‑ and‑white marble floor, down the arched silent corridor and through the glass doors, which open with a sigh onto the pool. The Russian waves Michel into a white painted chair. They sit facing each other in silence, their shadows glimmering in the water of the pool lit up by moonlight. The warm air is scented with honeysuckle and jasmine that grows in big pots at the four corners of the pool. It is very quiet.

The house seems deserted—no one else here, no servants. “What was it you wanted to talk about?” the Russian asks, but

Michel just shakes his head. What is there to say? So it is the Russian who speaks.

Michel sees a deck of cards and a bottle of vodka on the table. “Are you a gambler?” he asks.

“Aren’t we all? Or anyway all Russians?” he says with a grin, and offers Michel some vodka. Michel knocks back several shots, his temples burning.

The Russian, for some reason, talks of his studies. He has a thick accent but speaks fluent English in a rather low, guttural voice, using his hands as he speaks. He says he was lucky in high school, as he was able to concentrate on a few subjects in which he did well, or he would never have gotten into university.

“Was it difficult?” Michel asks.

“Competition was fierce. There were a hundred places open but only ten for high school graduates, and I was no good at things like chemistry or math, though I had a terrific German teacher,” he says.

“So you concentrated on the humanities like I did?” Michel asks.

“Best preparation for life,” the Russian says. “Teaches you how to read people, doesn’t it? I read lots of books as a boy, books about sport, spies: The Sword and the Shield—stuff like that. Later I studied law, because I wanted to be a spy, and they told me at the KGB I needed a law degree.”

Michel looks at his smooth face, the narrow blue eyes, the plump, sensuous lips. Of course you did. Heaven knows what the man might have done as a spy, whom he might have had assassinated or killed himself.

The Russian looks at Michel and says, “In some ways we are similar, you and me.”

“Similar? In what ways?” Michel asks, smiling at him, surprised.

“All those secrets—banking secrets in your case.” He smiles, turning his head slightly. “You, too, are good at keeping secrets, aren’t you?”

Michel nods and asks himself, in the end, how different is a spy from a Swiss banker?

“When I came back from Dresden—when the Soviet Union was no more—I was lost. What had I accomplished? What was all that work for? All those studies? All the hours I had listened and learned? All the informants I had found. You must feel something like that now with all the names in the papers.”

Michel looks at him and nods.

The Russian continues, “I had worked so hard. It wasn’t easy.” He was poor, he tells Michel, and the stipend they were allowed at the university did not cover his expenses.

“So how did you live?” Michel asks, thinking of the generous amounts his parents had scraped together to send him, the only boy, to Stanford, because they wanted him to have the advantage of an American education, and how his sisters had complained, how their jealousy had been sparked. It was the beginning of his estrangement from the family, he thinks, that and his father’s terrible death. Also, they had never really liked Alice. He re‑ members, bitterly, hearing his eldest sister, Suzanne, saying, “She has shifty eyes”—his brilliant, beautiful American bride! Shifty eyes! He was terribly offended, but now he wonders if Suzanne was right.

Sometimes he worked in construction, which paid well, the Russian says. “Hard, but you could get a thousand rubles for six weeks’ work.”

Once, when they had some cash, he and his friends managed to buy seats on the deck of a big, beautiful ocean liner going to Odessa. They were made to wait on the quay while the passengers with first‑class tickets got on board. Then they got worried they would never get on the ship, so they simply told the attendant they had the big tickets. They had just made it on board when the attendants lifted the gangplank, leaving the crowd of passengers who had paid money for their deck tickets on the quay. “Story of my life,” he says with a grin.

He says they found some lifeboats and climbed up into them and used them as hammocks. For two nights he lay there looking up at the stars.

“It was beautiful. I’d never seen something so beautiful,” he says, smiling and looking at Michel.

“Best place to be,” Michel says, adding, “We should go sailing together, one day.”

The Russian nods and says, “I would like that very much. Wait, I have something for you.” He grins at Michel and gets up. He goes into the house, and comes back with something in his hand.

“For good luck. It will keep you safe,” he says, reaching out to give it to Michel.

“Matryoshka, you know, those Russian dolls that fit into one another?”

The Russian screws off the top one, and Michel nods his head.

Michel puts them into his pocket. “Thank you,” he says, won‑ dering if this man could be a friend, a real friend.

Then he tells the Russian about Alice, what she has done to him. “I was so sure of her, so certain she loved me completely, uniquely,” he says.

The Russian nods. “I know what you mean.” Then he looks into the dark corners of his garden and says, “Do you want me to help?” with a half grin, picking up the pack of cards and flip‑ ping them back and forth through his long, lean fingers.

“What do you mean?” Michel asks. “How could you?” “Well, I could find someone who would take care of the problem for a price.” He fans the pack out on the table before him, picking out the king of hearts, the ace of spades.

Michel looks at the cards and at him and for a moment imagines Alice erased like a word on a page: gone her sweet smile, the birthmark on the shoulder, the dark flower between the lithe legs that Luigi, too, has apparently appreciated.

“Nothing life‑threatening—just a little lesson she wouldn’t forget.”

Michel shakes his head. “That’s not what I had in mind,” he says, and grins. “But thanks.”

As he leaves the house and walks to his car, he feels a breath of dark damp sea air wafting up from the shore. All he can hear is the soft sound of the sea and the blood beating in his ears. 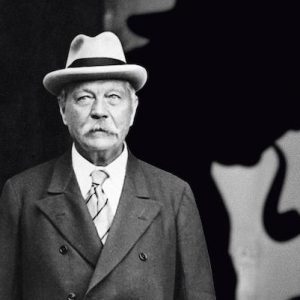