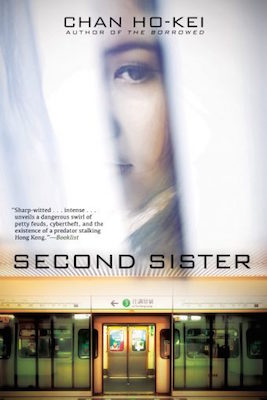 The following is an exclusive excerpt from Second Sister, by Chan Ho-Kei. Originally published in China in 2017 and translated by Jeremy Tiang, it tells the story of the tragic and mysterious suicide of a high-school girl, in a futuristic, totally digital city--and her older, librarian sister, who begins to search for the shocking cause.

Nga-Yee stood outside a six-story tenement building on Second Street in Sai Ying Pun, staring at the house number in confusion.

She glanced again at the handwritten address on the business card, then at the numbers by the front door, so faded they were almost illegible. The building must have been at least seventy years old. Its outer wall was a dilapidated gray, which she sus- pected might have started out white. The gutter was coming off the porch roof, and there were no mailboxes. A plain doorway led to a staircase that reached up to the darkness of the first floor. The building had no name—just 151, though the bottom half of the 5 had been more or less rubbed away.

It was eleven o’clock, the morning after Nga-Yee’s meeting with Mr. Mok. She had followed the address on the card, making her way to Sai Wan on Hong Kong Island. She’d expected to find a commercial building, but when she walked out of the Sai Ying Pun MTR station and down Second Street, there were only run-down tenements. But of course, Mr. Mok had said N was unlicensed, so he could hardly run his firm from a gleaming skyscraper.

Even so, this building was far from what she’d imagined.

It didn’t look habitable by human beings, not because of the worn exterior, but the reek of abandonment that filled the place. All the windows except on the top floor were tightly shut, and none had air-conditioning units, unlike the mud-yellow five-story building right across the street, with units of different sizes and brands on all floors, and laundry racks draped with T-shirts, trousers, and sheets. Number 151 looked as if no one had lived here for years, the sort of place that might be taken over by va- grants, delinquents, junkies—even ghosts. The only sign that it wasn’t abandoned was the intact windows—and the front door hadn’t been boarded up.

Are they going to tear this down and start over? she wondered. She looked around, wondering if she’d got the address wrong. Second Street was a slightly curved road in the old quarter of Sai Ying Pun. There were new, tall buildings at either end, but along the stretch that Number 151 was on, it was all historical tenements. Apart from one paper goods store and two hardware stores, the dozen or so other shops in the area had their shutters drawn, though she couldn’t tell if they were empty or just closed for the day. There were hardly any pedestrians on this street, which was barely wide enough for two lanes of traffic, though a black van was parked just a few yards from Nga-Yee, blocking one of the lanes. Bustling Queen’s Road West, just a couple of streets away, was completely different. Had Mr. Mok written down the wrong street or number? Perhaps he’d meant First or

As Nga-Yee hesitated, wondering whether she should walk into the murky stairwell or turn tail and look elsewhere, loud footsteps got her attention.

As Nga-Yee hesitated, wondering whether she should walk into the murky stairwell or turn tail and look elsewhere, loud footsteps got her attention. A woman in a dark blue dress was clumping down the stairs.

“That’s right,” the woman answered. She was about fifty. She looked Nga-Yee up and down while Nga-Yee took in her red plastic bucket filled with cleaning products, rubber gloves, brush, and dustpan.

“Do you live here? I wanted to ask if the sixth floor—”

“Are you looking for N?”

So this was the right address.

“That’s right—sixth floor,” said the woman, glancing at the card in her hand and giving a friendly smile. “Only one apart- ment on each floor, you’ll see it right away.”

Nga-Yee thanked the woman and watched as she walked away toward Water Street. If this resident—was she a cleaning lady?—knew N, it must be the right place. Her heart in her mouth, she climbed the murky stairwell. She had no idea whether N would be able to help her or not, but this place was giving her the creeps. As she approached each corner, she fully expected some horrifying creature to jump out at her.

Having slowly made her way up five flights, she arrived at the sixth floor. The landing had an ordinary white wooden door with a metal gate before it. There was nothing on the door or the gate—not a private detective sign nor the usual effigy of the door god or the red banner proclaiming “Come and go in peace.” A black doorbell was mounted on the wall, the old-fashioned kind, like something from the 1960s or ’70s.

After double-checking that the sign on the wall said 6, Nga-Yee pressed the doorbell.

She waited ten seconds, but there was no sign of movement.

Another half a minute. The door remained tightly shut.

Could he be out? But then a faint rustling noise came from within the flat.

Random objects were piled by the door—newspapers and magazines, clothes and shoes, cardboard boxes of all sizes. Past the entrance, the living room was just as chaotic. Two bookcases took up the far wall, both untidily stuffed with books. On the round table in front of them were three wooden caskets about the size of shoe boxes, crammed with wires, extension cables, and electronic components Nga-Yee had never seen before. All the chairs around the table were covered with stuff, including an old computer terminal, yellowing and upside down.

On the left side of the living room was a desk, just as messy as the rest of the place: papers, stationery, books, empty beer bot- tles, snack bar wrappers, and two laptops were scattered across its surface. In front of it, two dark green armchairs faced each other, on them an electric guitar and a pink suitcase. Between the armchairs was a coffee table, the only item of furniture that wasn’t covered in trash. Shelves on either side of the desk held an ancient-looking sound system, every available space filled with CDs, vinyl records, and cassette tapes. On the lowest shelf were the electric guitar’s amp and cables tangled like a ball of wool, a whole clump of them on the ground. To the right of the shelves was a three-foot-high potted plant standing in front of a large window. Although the broken venetian blind was half lowered, harsh sunlight managed to force its way in, illuminating a thick layer of dust over all the furniture and surfaces, not to mention the stains on the floorboards.

What kind of famous detective would look like a tramp and live in a dump like this? Nga-Yee almost spoke the thought out loud.

“You, sit down. I just woke up,” said the man, ignoring her question. He yawned, and walked barefoot to the bathroom off the vestibule. Nga-Yee looked around, but there was nowhere to sit, so she hovered awkwardly by the sofa.

Nga-Yee gaped. Everything went quiet. She pressed the bell again, unleashing another racket.

“I said stop that!” The door opened again, showing a little more of the face this time.

“Detective Mok sent me!” Nga-Yee blurted out frantically before the door could fully close.

The words “Detective Mok” actually seemed to have an effect. The man paused, then slowly opened the door again. Nga-Yee took out Mok’s business card and passed it to him through the gate.

“Damn it! What stupid business is that bastard Mok throwing my way this time?” The man took the card and opened the gate to let Nga-Yee in.

Now that she was inside, Nga-Yee got a proper look at him, and what she saw was not what she expected. He looked about forty, neither tall nor well built. A regular, normal guy, a bit skinny. His messy hair looked like a tumbleweed, and his bangs fell past his brows to a pair of lethargic eyes that seemed rather at odds with his aristocratic nose. There was stubble all over his face, and combined with his grimy, creased gray T-shirt and fray- ing blue-and-white-checked cropped trousers, the overall effect was of someone who slept in a doorway. Nga-Yee grew up on a government housing estate and had seen lots of these unkempt figures around. Auntie Chan’s husband used to look like that. Every day she’d stand, arms akimbo, and yell at him for being so useless while Uncle Chan ignored her and drank more beer.

Nga-Yee looked away from the man and received yet another shock. Two words popped into her mind: “rat’s nest.”

Counting Down the Greatest Crime Films of All-Time: # 28 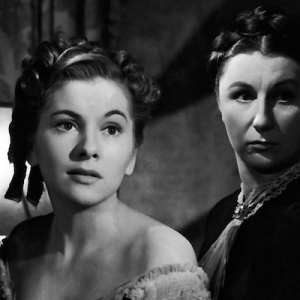