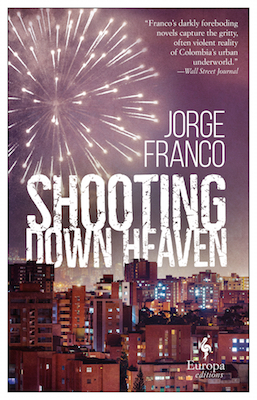 The following is an exclusive excerpt from Shooting Down Heaven, by Jorge Franco. Larry returns to his hometown in Colombia after twelve years when his father, an associate of Pablo Escobar, is murdered. Home, he finally sees the damage done to his loved ones by the drug cartels and, finding his conscience, he must confront the past he has long written off.

Three days after Escobar’s death, we gathered around the table again. Before, everybody used to do their own thing—Julio and I off to school, or the two of us with Fernanda, or her with Libardo—but it took just three nights for the four of us to end up at the dining room table again and discuss the subject as a family for the first time. During that period, Libardo was constantly in and out of the house; one night he didn’t even come home to sleep, but Fernanda wasn’t worried. I was. The country was in turmoil—whether for good or for ill, something transformational had happened, something so significant that nobody was talking about anything else. Even today everybody remembers what they were doing when they heard about Escobar’s death. So I kept a close eye on Libardo. I read his facial expressions, his mood, to guess what was going on. Relax, son, he kept saying, without my even asking anything. But the more he said it, the more I worried. I tried to keep close to him so I could eavesdrop on his phone conversations, but he’d shut himself up in his study, talk in a low voice, or persuade the other person to meet face to face. When he talked to Fernanda, they’d go off by themselves and speak in monosyllables. She didn’t share much with us. She asked to us to let Libardo do his thing, saying he’d always taken care of us and that wasn’t going to change.

Through the news programs and the press, I learned the important bits. Or at least the bits I sensed were important for us. In all the chaos, everything was a jumble, and I even became infected with the country’s jubilant mood. I believed—I’d always believed—that without Escobar around, our lives were going to change for the better. I hoped Libardo would rethink his path, would have no choice but to go back to normal, by which I meant the way other people lived. But that was never in his plans, as he made clear that night when we finally came together, sitting around the dining room table.

“We’re going to go on vacation like we do every December,” he said, not meeting our eyes. He was staring at his plate of food, which was a sad affair that night.

“To the farm?” asked Julio, who loved spending vacations there.

“No,” Libardo said. “We’re traveling a little farther this time. I’m arranging for us to go to the Dominican Republic, to one of those all-inclusive resorts.”

“We’re coming back here, though?” I asked.

He raised his head and looked at us in silence, his accustomed vigor and swiftness now gone. Libardo was forty-eight and kept himself in good shape, muscular and active, but over those three days he seemed to have aged twenty years. Fernanda was endlessly stirring her coffee with a little spoon, her eyes fixed on her plate too, as if she already knew what Libardo was hiding.

“Of course we’re coming back,” he said.

“Why would you say that, Larry?” he asked with studied calm.

“I think you’re trying to hide us.”

Fernanda kept staring at the table; Libardo gripped his knife and fork and pushed his food around pensively. Then he spoke, but not the way he usually did—it was like he was reciting a speech.

“I don’t deny they’re trying to scare us. It’s not enough for them to have taken Pablo down. They want to grind the ruins to dust and make sure there’s absolutely nothing left. Nothing that would support us and help us rise up.”

“In these situations,” he said, “nobody stands tough. They turn tail, they roll over to save themselves or to profit from it.

Fernanda lifted her head and looked at him. Maybe she thought his tone sounded pathetic, inappropriate for explaining the situation to a couple of teenagers. He returned her gaze and blinked nervously, sweat beading on his upper lip.

“In these situations,” he said, “nobody stands tough. They turn tail, they roll over to save themselves or to profit from it. Everybody else is shitting themselves, but you know me”—he looked at Julio and me and pointed at his chest—“you know I’m not one to run, much less roll over. I’m no rat.”

Fernanda and Libardo started talking over each other. The dining table was big for the four of us. I was surveying them, even Julio, from an unbridgeable distance. It felt like they weren’t going to hear me unless I shouted. Even though my breath was catching in my throat, I stood up and drowned them all out, shouting at my father, “They’re going to kill us, and it’s all your fault! You don’t care about us! All you’re interested in is money—you don’t give a crap what happens to us!”

Fernanda leaned her elbows on the table and covered her face with her hands. Libardo looked at me in bewilderment, his lip quivering. Julio interrupted me.

“Even if we never come back, even if we hide, they’re going to kill us,” I kept saying. “They managed to kill him, so killing us will be a cakewalk.”

“We’re going to beef up our security and fight back,” Libardo said. “We’ve worked hard for years. We’re not going to let everything be wiped out just like that.”

“Oh, sure, you little brat,” he said. “You’ll keep your mouth shut when it comes to your motorcycles, your nice clothes, your trips, your fancy watches, but when they come after us, you run.”

“Of course I’m going to run,” I said. “I’m not going to let myself be killed because of you.”

A fist in my face knocked me to the floor. Fernanda screamed. When I opened my eyes, I expected to find myself face to face with Libardo, but it was Julio who’d punched me. On the floor I gasped for breath, and so did he, straddling me and hitting me every time I tried to lash out. Libardo lifted him up by the arms, and Julio kicked in the air, still trying to get at me. Libardo carried him off and ordered him to his room.

I got up slowly, aching and dazed. I leaned against the chair and saw that Fernanda still had her elbows on the table and her head in her hands. I thought she was crying, but she was motionless and silent. Libardo was pacing around the dining room. He was agitated and snorting like an irritated animal. He wouldn’t look at me. I went to my room too. I heard them arguing for a good while. I couldn’t hear what they were say- ing, but it was easy to imagine. Maybe the people who were after Libardo weren’t going to kill us. They already knew we would destroy one another without their help.

From Shooting Down Heaven by Jorge Franco and translated from the Spanish by Andrea Rosenberg. Used with the permission of the publisher, Europa. Copyright © 2020 by Jorge Franco.

Five Books That Will Make Your Child a Future Crime Writer 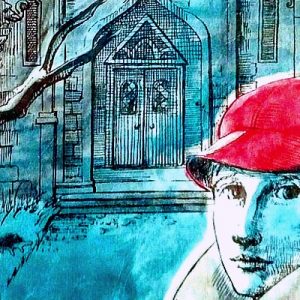 Five Books That Will Make Your Child a Future Crime Writer Loretta, who is five, tells me she wants to be a writer when she grows up. If this is my fault—and it must be—I can only...
© LitHub
Back to top