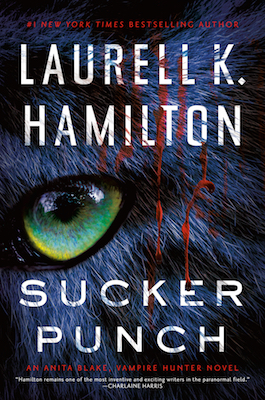 The following is an exclusive excerpt from Sucker Punch, by Laurel K. Hamilton. U.S. Marshal Anita Blake heads to a small Michigan town to investigate the death of her colleague's uncle, which seems to have been executed by a young wereleopard. But something about this isn't right. With the town is hastening to bring the death sentence on the shapeshifter, Anita knows she doesn't have long to find the real killer.

We all shook hands as if there wasn’t another person in the room— well, in the cell. You don’t have to have a badge long before you start to think differently about prisoners. It’s partially self‑preservation, especially for marshals in the preternatural branch like Newman and me. It’s harder to kill someone if you think of them as people just like you and me. Everyone but me knew this prisoner, and yet they still introduced me to the deputy first as if Bobby Marchand weren’t within hearing distance. I wondered if they even knew they’d done it.

Newman turned to the cell without introducing me to the man inside it. “How are you doing, Bobby?”

Bobby Marchand blinked at us with blue eyes so large that they dominated his face to the point they were all you saw at first, like he was an anime character. Of course, it might have been the mask of dried blood surrounding his baby blues that made them so startling. The contrast must have been even more extreme when the blood had been fresh and red. Now it was a tired sort of brick red heading toward brown; most people would have thought it was dried mud. They’d never have guessed it was blood until they saw what happened in a shower. Water would bring it back to life, and suddenly the mud would look like something far more liquid than dirt. Bobby’s short blond hair had one spot of drying blood in it; the rest was disheveled but clean. He had a gray blanket wrapped around himself, so most of him was covered. The hint of chest that showed had blood drying on it, but the shoulders and arms that were holding the blanket in place were clean; his hands were not. There was even blood dried on the cuff around his right wrist. The chain from it went to the metal frame of the bed beside him. The bed was chained to the concrete floor, and there was a second chain that trailed underneath the blanket toward the leg of the bed, so he was shackled on at least one ankle, too. They looked like ordinary restraints, not the new stuff specifically designed for supernatural prisoners with their supernatural strength, which meant that if Bobby wanted to break his chains, he could, even in human form. Even the bars wouldn’t hold if he really wanted out, but it would take longer—long enough for the officer on guard duty to shoot him and hope they could kill him before he could finish shifting into his even stronger other half. That they had the deputy on watch outside the cell with a shotgun meant they understood some of it, and they probably didn’t have the budget for the new special restraints. Even some major cities couldn’t afford more than a couple of full sets.

Bobby fidgeted, clutching his blanket tighter. He’d tried to clean his hands by wiping them on the blanket in a few places, but the blood had embedded around his nails and into the pores of his skin.

Even a shower wouldn’t get it all now.  I knew from experience that if you didn’t wear gloves when there was that much blood, it was a serious bitch to get it cleaned out from around your nails. Under your nails you could do, but the cuticles and the edges of the nails were the challenge. It was just his hands that were covered in dried blood; it didn’t go past either wrist. In that moment I believed that Bobby Marchand was being framed. Whoever had done the blood evidence on him hadn’t known that if someone plunged bare hands into a still living body, or even a freshly dead one, the blood wouldn’t stop neatly at the wrists. It would climb up the arms, and there would be blood spatter on the chest, not the thick coating that someone had painted on Bobby. It was all wrong, but unless you’d seen as many lycanthrope kills as I had, or waded through enough gory murder scenes, you wouldn’t think about the right things. You wouldn’t know where to put the blood.

“How am I supposed to be, Win? I killed Uncle Ray.”

Bobby turned those blue eyes in their gory mask to the sheriff. “Duke, you told me I did it. You told me I killed Uncle Ray.”

“I’m sorry, Bobby. I’m really sorry, but we found you covered in his blood, and you’re the only wereanimal in these parts.”

Bobby looked back at Newman. “Duke is right. If a wereanimal killed Uncle Ray, then it has to be me. There isn’t another shapeshifter for a hundred miles.”

“Let us worry about finding other suspects, Bobby. I just need to make sure you don’t do anything stupid while I’m out there trying to prove you’re innocent.”

“Now, Win,” Leduc said, “don’t get the boy’s hopes up like that.”  I debated on whether to remark on the blood evidence now, but

I wanted to tell Newman in private first. He’d known the blood wasn’t right, but he didn’t have my field experience to say exactly why it was wrong. This was his warrant, his case, and, almost more important, his hometown, his friends. I didn’t want to undercut his authority here. I wanted to know only one thing: Had they photographed the blood patterns on the prisoner? I wasn’t besmirching Leduc and his people’s police work, but when you know a warrant of execution has been issued, sometimes even the best officers don’t collect evidence like they would in a regular murder case. I mean, what’s the point? There’s never going to be a trial.

“I don’t mean to get your hopes up, Bobby, but I believe there’s a chance you didn’t do this. That’s why I called in a more experienced marshal to look over your case.”

“It’s commendable that you want to be sure, Win, but you wasted Marshal Blake’s time getting her up here,” Leduc said.

Deputy Anthony and Bobby both said, “Blake,” at the same time. They looked at each other, then back at me as she said, “Anita Blake?” and he said, “Not Anita Blake?”

“You’re here to kill me, because Win doesn’t want to have to do it,” Bobby said, and he seemed completely defeated. There wasn’t even any fear that I could detect, and there should have been. Even guilty people are afraid to die. The sheriff might be right about the suicide risk after all.

“How do the two of you know Marshal Blake?” Leduc asked.

“She’s our bogeyman. If you break the law, she’s who they send to kill you,” Bobby said, voice thick with sorrow, but still no nervous‑ ness, just a hopelessness as if it were already over.

“I’m just one marshal from the preternatural branch, not the only one,” I said.

Deputy Anthony said, “You still have the highest number of successful executions in the entire preternatural branch.”

“I was part of the old vampire hunter system years before I got grandfathered into the Marshals Service, so I had a head start.”

She shook her head. “Even Death doesn’t have as high a kill count as you do, and he started earlier than you did.”

If Marshal Ted (Edward) Forrester and I weren’t best friends and partners, it would probably bother him that he, Death, was behind me on legal kills. Of course, if you added in illegal kills, he was ahead of me. Short of a true apocalypse, I’d never catch up with his numbers if you included all of them.

“Death gets everyone in the end, Frankie, so what the hell are you talking about? No one has bigger numbers than death,” Leduc said, and he sounded frustrated, bordering on angry. He was more on edge than he was showing, but then I think they all were. I was the only one without a personal stake in the murder.

“The other police nicknamed four of the preternatural marshals the Four Horsemen: Death, War, Hunger, and Plague,” she said.

Leduc made a humph sound. “I know what the Four Horsemen are called. I know my Bible, and Marshal Blake isn’t in it.”

“Of course not, sir. I didn’t mean the real Four Horsemen.”

Leduc looked at me, and it was a slightly different look now, more appraising—not the way that a man looks at an attractive woman, but the way a man looks at another man when he’s wondering if he could take him in a fight. Leduc decided he could take me in a fair fight and didn’t try to keep the knowledge off his face and out of his body language. I was okay with him thinking he would win. I knew better, and that was enough.

“So, if someone else is Death, who are you, Plague or Hunger?”

That made him frown harder and then he laughed. “You’re too small to be War, Blake.”

“Even a little war is a very bad thing,” I said, and smiled.

It's Time to Demystify the Serial Killer. 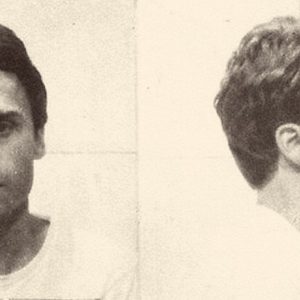 It's Time to Demystify the Serial Killer. I read Michelle McNamara’s I’ll Be Gone in the Dark: One Woman’s Obsessive Search for the Golden State Killer knowing...
© LitHub
Back to top