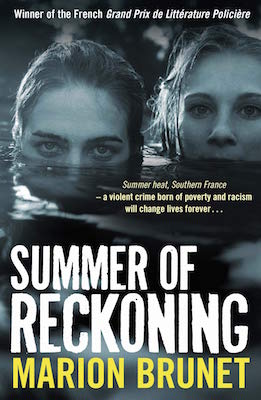 The following is an exclusive excerpt from Summer of Reckoning, by Marion Brunet and translated by Katherine Gregor. Céline and Jo are teenagers in the idyllic French tourist destination of Luberon. But when Céline becomes pregnant and refuses to reveal the identity of the baby's father, their own father begins a quest for revenge.

It’s something they’ve always done. At least since they’ve been old enough to slip out of the house without making a sound. Let loose like wild children in scrubland. Nobody’s ever considered stopping them because nobody really knows. At night, every summer when the stifling heat begins, Jo and Céline sneak into the nice, still-empty properties to take advantage of their swimming pools. It’s now become more of a ritual than a habit, and marks the start of the season. The Vaucluse is full of villas lived in one month a year, and they all have pools that are clean and lit from June onwards.

So when Jo grabbed two beach towels and got her sister out of bed, they didn’t have to say anything. They’ve always shared a room, since the house isn’t big enough for them to have one each. Even when their differences became obvious, clear even from the posters pinned to the walls, they had to adapt. They often declare their love for each other with slaps. And intimacy is a notion they acquired together. They quietly slip over the windowsill and plunge into the night, climb over the short wall on the left and sprint without laughing until they’re away from the neighbouring houses; they chuckle joyously once they’re on the road. This summer will be different from the others, they know it – there’s a menace in the heavy, already scorching air. They feel it in the pits of their stomachs but they carry on as though nothing’s happening, as though the summer will keep its promises.

On the Chemin des Dames, they stop giggling and listen to the dry grass crackling under their feet. For their first bathe of the summer, they’ve chosen a villa they’ve known for a long time: it belongs to a slightly over-the-hill American actress who comes twice a year to bask in the sun with a lover. There’s less surveillance than in politicians’ houses. They sometimes have fun dodging this surveillance, playing cat and mouse with slumbering security men with thick glasses and walkie-talkies. Getting thrown out, running away half- naked, holding their flip-flops, running down the paths. Then, afterwards, talking about it, and laughing at the man’s face, flabbergasted at finding two girls surface diving in a pool supposed to be smooth and empty until the owners arrive. They have some hysterical memories. But they don’t feel like doing that tonight. Tonight, they’re celebrating the beginning of the summer and the start of fucking problems, celebrating the end of something they can’t quite give a name to. No point in adding any more thrills.

As they climb over the wire fencing Jo scrapes her hip, starts squealing and falls on the other side. Sitting  on the grass, in the dark, she feels the tear in her shorts. Céline is nearby. She knows by the rustling of leaves and her stifled giggle. “You fucking stupid? It’s not funny: I’m bleeding.”

They silence the song of the frogs congregating in the stone basins. Jo stands up and forgets about the scratches from the metal and her torn shorts. They’re extensive grounds, where you can weave through a hundred yards of truffle oaks to the beautiful blue pool without a ripple. They walk across familiar territory, even though they haven’t been here for a long time. There are crackling sounds under their feet until the soft lawn takes them by surprise. Here, sprinklers make the grass greener; they can feel its sponginess under their sandals. They remove their shoes to feel the path, the soil beneath their bare soles.

Here they are: their reflection, their moving shadows defined on the villa walls, and the feeling of coolness that rises from the pool even before they’ve dived into it. At once familiar and thrilling. They tear off their clothes and jump in exactly at the same time, causing large eddies on the stone edge. Jo is the first to surface; she lies on her back and lets herself drift. Céline swims across the bottom of the pool, catches her breath on the other side and leans against the edge. They used to play at this being their own home, pretended they were princesses or starlets, chatted about a million crazy plans, about riding clubs and trips, putting on a posh accent. They stopped this game because Jo got fed up with it. For Jo, leaving is a real dream. Not necessarily to lead the life of a princess, but just to escape this one. She knows she’s swimming illegally and uninvited in the pools of these rich people – and this always carries an illicit charm when all else fails.

Céline joins her sister in two powerful strokes. “What are we doing this summer?”

“What are you planning to do?”

“Patrick’s cousin told me about a community bar in Avignon. It opens during the festival.”

Jo lets herself sink. She hears Céline, Céline’s laughter, and sounds stretching like an echo, but she can’t make out the words. She stays like that a moment longer, her head numb under the water.

Article continues after advertisement
Her blood pulsating violently in her body as though it’s about to split her veins, she feels the throbbing in her temples, her throat and her genitals, which suddenly swell up as though with desire.

This is a game that began a long time ago; a secret game nobody, not even her sister, knows about: playing at drowning. Pretending to die. She stays underwater as long as possible, until her heart is thumping so hard it feels as though it’s about to burst. She then shakes her head in every direction and it becomes weird: painful and pleasant at the same time. When she’s on the edge, the very edge – or at least what she thinks is the very edge – she resurfaces and catches her breath, burning with the thought that she nearly died, and that she’s in control of this unspeakable thing. Her first breath of air is amazing, absolutely brilliant. Her blood pulsating violently in her body as though it’s about to split her veins, she feels the throbbing in her temples, her throat and her genitals, which suddenly swell up as though with desire. She loves that. Yes, she feels more alive than ever.

She comes back up, breathless. She didn’t play the game

to the very end because she’s not alone. “What did you say?” “I said you’re not exactly stylish enough to be a waitress.” “It’s a community bar, not a nightclub.”

“And the difference is…?”

“Artists, actors go there, musicians. People who go to the theatre.”

“In any case, you’re not old enough. Besides, has Patrick’s cousin seen your eyes?”

“Does she know the customers are going to pretend they don’t see you?”

“If you work in the fields at Grandad’s then at least the seasonal workers are so ugly they won’t notice you’re weird.”

“I may be weird, but I don’t screw everybody. And if I do, then I use a condom.”

Céline hurls herself at her sister and pushes down on her head with all her weight. Jo struggles, laughing hysterically before sinking, then grabs Céline by the waist and drags her down with her. They sink together. Their bodies get tangled up in a ballet slowed down by the water. Their heels hit the bottom of the pool and they dart back up and catch their breath, spluttering.

“Are you going to tell me who’s the retard who screwed you this time? The guy who did this?”

Céline sticks out her lower lip as she chuckles, and accidentally gulps chlorinated water in the process.

“I know exactly who it is.”

Jo gets the giggles. “Fuck, Céline…”

Their hiccuping laughter echoes against the stone walls of the villa. Their hair is stuck to their heads, their faces wet, their mouths open in a roaring laughter amplified by the night. Céline’s black mascara is running under her eyes. Her belly and her breasts relax in the eddies. And the turquoise light of the swimming pool gives them a magnificent drowned glow.

They mustn’t be too late. There’s school in the morning. 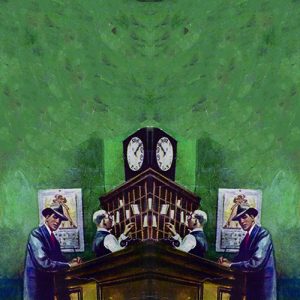 The State of Crime Writing in 2020: Part 1 Each year, authors, editors, and members of the mystery community gather together in New York City to award the nation's...
© LitHub
Back to top