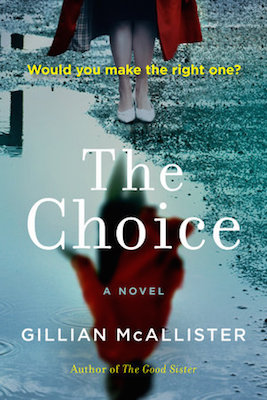 The following is an exclusive excerpt from The Choice, by Gillian McAllister. Joanna is walking home alone at night when she hears footsteps behind her. She thinks they belong to the man at the bar she just left, who would not leave her alone. Right when the figure is behind her, she turns and shoves, sending the person sailing down a flight of stairs and crashing to the bottom. She has made her choice and now must make another. Does she confess, or does she hold the secret for the rest of her life?

Laura hands me my coat. “Jesus,” she says. “I’ve not had to leave a bar because of a nutter for a while. Are we twenty again?”

She’s making light of it, and I’m thankful for that. I can still feel him between my legs, that pressure, the feeling of fullness. Was that a sexual assault? I guess it was. But maybe I am somehow to blame. I shudder, wrapping my coat around me to try to keep out the rain.

“You all right?” Laura asks.

I nod, not lifting my head again, looking at my cream-ribboned shoes. I don’t want to discuss it. Like the congestion-zone charge I ignored until it was too late, and we had to pay double and Reuben got cross, I sweep it away into a back room in my mind.

“Okay,” she says, still looking warily at me. “I had a bad feeling about tonight.”

It’s a very Laura thing to say, and it’s another reason she and Reuben don’t get on: her mysticism, his vehement logic.

She tugs at a scarf that’s wrapped around the handle of her bag and puts it on. Over the road, two restaurants have their Christmas lights out; champagne-colored fairy lights are wound around potted trees.

We like to explore the hidden parts of London. We always go somewhere new. Our rent is too high to endlessly go to the same places: it feels like we are making our money back, somehow.

I check my watch. It’s too late to go on anywhere else. I’m enticed by the thought of Reuben at home in our living room. He’ll be wearing soft clothes. He’ll have the lights dimmed. The television on low. A glass of red on the arm of the sofa, the stem held between his elegant fingers. He likes wine, will even drink it alone. I drink Ribena when I am alone.

“Which way are you going?” Laura says to me. She points with a thumb behind her.

“Warwick Avenue,” I say. “That’s the easiest.” I see a dark figure dart behind her, in the awning of the bar we’ve just left, but it disappears before I can get a proper look. Maybe it’s the couple, moving as one, off home, I think. I look over my shoulder again anyway, just to check. There’s nothing.

Laura smells of cologne as she reaches to hug me. She’s wearing a maxi skirt and biker boots. “WhatsApp me when you’re back,” she says.

I nod. WhatsApp is our medium. Tens of messages a day. Newspaper articles. Tiny snapshots of her art. Beers consumed in the middle of the day with Jonty. Screenshots of funny memes. Selfies from me, bored at work. We love it.

I set off toward the canal, crossing the bridge. It’s wrought iron, blue. It reminds me of the playground at school. My fingers trail over the bars. It’s ghostly out here. There’s nobody around. The rain gets slightly heavier and a wind chills me.

That’s when I hear it. Them. The footsteps. Surely I’m imagining it? I stop. But no. There they are. A heavy tread.

I could turn around. Go back to the bar. But is the bar safe?

What do you do, I find myself thinking, when you think somebody is following you down a deserted strip of canal? When you could become a statistic, a news piece, a tragedy?

Nothing. That’s the answer. You carry on. You hope.

I never thought something like this would happen to me. I suppose that’s what makes me behave as though I’m in a film: I have no idea what else to do. I stop, for a moment, testing him, and his footsteps stop, too.

I start again, this time faster, and I hear him begin, too. My imagination fires up like a sprinter off the starting blocks and soon I can’t tell what’s real. Is he right behind me—I can’t look—and about to reach for me? The pounding of his footsteps is consistent, slapping against the wet concrete, but I can’t tell any more than that.

I will call somebody, I decide.

I turn left down a side alley I would never usually go down. Just to see what he does. I walk past white houses with balconies. Millionaires’ houses. The occasional bay window is lit up, little orange squares in the night, tasteful Christmas trees glowing amber like fireflies. I would usually peer in, invent lives for them, backstories, but not tonight.

He has followed me. Five more steps. His footfalls thunder along behind me. I can’t look over my shoulder. I am frozen.

I start to plan. I could call Laura. Could she get over here quickly? No. I break into a little run. These stupid shoes.

Article continues after advertisement
I could knock on a door. But . . . am I definitely being followed? They’d think me mad.

I could knock on a door. But . . . am I definitely being followed? They’d think me mad. It is strange how much I think of people’s opinions, their perceptions of me, right now, just like I did in the bar when I didn’t cry out when he grabbed my hand. I want these people, these strangers, this collective unconscious, to like me.

I turn right, off the side street, back to a main road and cross it. I get out my phone, ready to dial. Nine-nine-nine? No, it seems too extreme. I call Reuben instead. He takes an age to answer, which is not uncommon—he hates the telephone, unless it’s me calling—but then his deep hello echoes through me.

I can picture him now. It’s a comfort. He’ll be reclining against the sofa. His hair will look auburn, not ginger, in our dimly lit living room. He will be frowning, his eyes a dark, foresty green.

“What?” he says. He will be sitting forward now.

His eyebrows will draw together. “By who?”

“This bloke. From the bar.”

“Can you just—stay with me? Walk me to the Tube—virtually?” I say.

“Of course,” he murmurs.

“Okay,” he echoes, but his voice is crackly.

I pull the phone away from my ear and look at it, the light from it illuminating the clouds of my hot breath. Shit. No signal.

There’s a set of stairs in front of me, leading down to a bridge. I dart into the corner where the stairs begin, to see if he follows. I put one foot on the first step, frozen, not able to look behind me.

And now he is behind me, too. And now it’s not my imagination. I know. He is right behind me. His body ready to hold on to my hips again. To push himself into me, against my will.

I see his red trainer. Oh God. He is here. I am too scared to turn around and look at him properly. I cannot do it.

“Hello?” I say desperately into the phone.

Reuben crackles back, and then . . . the three beeps. Call failed.

I start to sprint down the stairs, and I’m a few steps down them when it happens, as I knew it would. His gloved hand behind me. It lands on the railings like a bird of prey. The gloves are exactly the sort he would wear, I find myself thinking. Designer. Sporty. He looked lithe.

I hear an intake of breath, and know he is about to speak, to threaten me. Perhaps his mouth is right next to my ear, his body poised to grab mine, to thrust again, and so I reach my hand out to grab the railings. They’re cold and wet; they soak my gloves.

And then I am acting before I know it.

He comes down by my right-hand side, ready to overtake me on the wide stairs. I turn. His hood’s up, but I can tell it’s him from his gait. I am remembering his body against mine again, and imagining yet more horrors—his sweet breath in my mouth, his penis up against my underwear, against my jeans, a full, damp, painful wetness—I bring my hand down on his, briefly, hard. He lets out a surprised cry. And with my right—my dominant hand—I push his body, firmly, squarely, the hardest I’ve ever pushed anything in my life. I release his hand as he falls—I’m surprised he falls; he’s at least six feet—and he tumbles like a stuntman down the concrete stairs to the towpath. He stops there, on his stomach, at a strange angle. I am breathing hard, and I stand, watching him, astonished. That I have done this. That I am safe. That he is lying there, not moving, and I am here, almost at the top.

I start to feel a weird, panicky hotness. I reach to undo my coat, wanting to feel the sharp winter air on my sweat-covered chest. My glove is sopping wet as it touches my skin. My forehead is slick with moisture, from perspiration or the fine mist descending from the sky around me, I don’t know. My bowels want to open, and right in the pit of my stomach I feel a hornet’s nest of fear beginning to buzz. Oh God. What have I done?

One minute ago I was scared for my life, and now I am scared for his.

My mind scans over the time in the bar. Feckless Joanna. I should have ignored him, told him to piss off, like Laura did. I never do the correct thing. I end up in messes. I avoid things and then they get much worse.

I close my eyes. Oh, please let me go back to Before. Before we met Sadiq. Before we left. Before he followed me. Before I pushed him.

I look down at Sadiq. His left arm is underneath him, twisted strangely. He’s fallen only seven steps, but they’re concrete, and wet. His right arm must have reached out in front of him. It’s landed just to the side of his face. He hasn’t moved at all.

I should go to help him. Call an ambulance. Confess.

Or I should run away, in case he’s about to get up again. Sprint home. Pretend I never did it. Go back to Before, even though I know I can’t.

The streetlights are too bright, refracted a hundred times in each drop of misty rain. I can see moisture on the concrete steps like thousands of beads of sweat. I can feel the cold air seeping into my coat. Sadiq is lying still and I look down at him and then around me, and think.

I could run, or I could stay and call him an ambulance.

Now it is decision time.

The Best Crime, Thriller, and Horror Books for Your Quarantine Situation 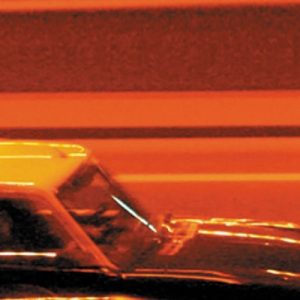 A Conversation with a Serial Killer About the First Time He Killed a Taxi Driver Over the course of one ghastly week in September 1982, the bodies of four taxi drivers were found in Buenos Aires, each murder...
© LitHub
Back to top