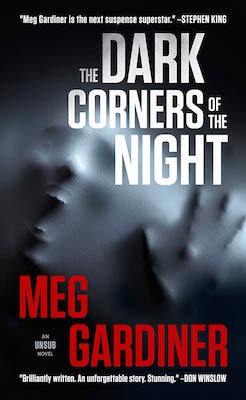 The following is an exclusive excerpt from The Dark Corners of the Night, by Meg Gardiner. The Midnight Man is a serial killer terrorizing Los Angeles, a predator who arrives at families’ homes during the night, killing parents but leaving their young children alive. FBI behavioral analyst Caitlin Hendrix arrives in town to help crack the case. But it’s not long before she realizes that the killer has a tragic secret, and it’s very similar to her own.

Winter, two a.m., and a Santa Ana wind was scouring Los Angeles. Hot and gritty, it keened over skyscrapers, through canyons and barrios, past the Hollywood sign, over flickering holiday lights, along the freeways, across the rippling surf. And through him. It sharpened his vision and clear-cut his path.

The neighborhood spread across the hillside like a fungus. Below him the lights of the San Fernando Valley prickled in the black air. The moon slicked the sky, whitewashing the street. He paused the music and pulled out the earbuds. The rivet-gun beat of Ministry’s “Stigmata” evaporated. The hiss of the 101 freeway replaced it.

The road noise obscured his footsteps. The moonlight cast his shadow on the grass as he crossed the lawn. Thin, silent, smooth. His shadow—the only companion he could trust. As black as his baseball cap. His hoodie. Jeans. Gloves.

Light on his feet, he strolled around the side of the house, dragging his fingers along the stucco.

He found the open window at the back.

He stood for a minute. The night and the wind filled him with command. He licked his lips. His knife sliced the window screen. His shadow invaded the house before the rest of him.

The Christmas tree was a dark pyramid in the living room corner. Presents hid beneath it, wrapping paper quicksilver in the moonlight. He absorbed the stillness. An electric hiss seemed to saturate the air.

He sheathed his knife. His shadow slid past framed photos hanging in the hallway. Family fun shots. Fathermother. Grannygramps. At the end of the hall he paused and nudged wide a door.

In the master bedroom a man and woman lay asleep, shadows and headlights skittering over them as cars passed on the freeway. The couple’s heads were barely visible on their pillows. Hiding. (Not any more. I found you. I know what you are.) He raised the gun.

It felt weightless in his grip. Felt like truth.

It meant revelation. Here, inexorable, undeniable. The sweeping headlights gave him enough light to line up the front and rear sights.

He held for a second. Extending the moment, feeling the bubble expand toward the bursting point. In the bed, the sleeping man breathed.

The blare of the gunshot jerked the woman awake. “Jesus, what …”

She lurched like a shot dog. Sleep-drunk. Confused. She felt the hot blood that striped her cheeks. Touched her face. Looked at her husband.

She turned, saw him, and stopped. He could be no more than a shadow at the foot of the bed. The Undoing.

He tracked the pistol and lined up the sights again.

She stumbled from the bed, hand out to ward him off. “No—”

He squeezed the trigger.

As the echo of gunfire faded, he exhaled. Silence swelled. Told you. They had seen. Showed you. He soaked in the sight for one final second.

Down the hall, a voice called out. It was small and tentative.

The intruder turned. In the darkened hall stood a young boy. First grade, maybe. Flannel pajama bottoms and what looked, in the thin moonlight, like a Star Wars T-shirt.

The intruder sauntered out of the parents’ room toward him. The boy dashed into a bedroom and slammed the door.

The bedroom door was flimsy particle board. The house was flimsy suburbia. He jammed the gun in the waistband of his jeans, raised his boot, and kicked the door open. It broke like Styrofoam.

The lightless room looked empty. He walked in, took a slow look around, strolled to the far side of the bed and back. The silence was distorted now—by breathing. He crossed the room and threw open the closet door.

Inside, the boy crouched in a ball. He was hugging his sister.

Their eyes, staring at him in the moonlight, were enormous.

When Caitlin climbed from the FBI Suburban, a bloodshot sun hung between the palm trees. The street sloped toward to the 101 freeway and the checkerboard sprawl of the San Fernando Valley. The mountains at the valley’s far edge were brown, furrowed, and under the blowing Santa Anas, shockingly clear. Mid-December, and it was in the high seventies. Caitlin’s black suit absorbed the heat. Her auburn hair wraithed around her shoulders.

Her colleagues from the FBI’s Behavioral Analysis Unit got out and shut the Suburban’s doors with a hard clack. They’d driven here straight from LAX. Unit Chief CJ Emmerich and Special Agent Brianne Rainey regarded the house.

Police tape batted on the porch. Emmerich, spare and angular, panned the property, the street, the neighborhood. His suit jacket flared like a wing in the wind.

“No trees in front. House is completely exposed,” he said.

Rainey set her hands on her hips. “How’d the killer see it? As a juicy target? Asking for what he wanted to dish out?”

Rainey’s gaze, smooth and cool, took in the house with seeming dispassion. Her voice was calm, her bearing even, her clothes chic, braids pulled into a high chignon. But Caitlin sensed Rainey steeling herself for what lay inside.

“He slunk in the back,” Caitlin said. “He saw but wanted to remain unseen.”

The front door opened, and two LAPD detectives stepped onto the porch. They were from the Homicide Special Section of the Robbery-Homicide Division and were the ones who had requested the BAU’s assistance. The BAU usually consulted on cases from Quantico. But Robbery-Homicide had gotten Emmerich, a legendary profiler, to jump on a cross-country flight with two of his agents. Receiving a call from such heavy hitters—detectives who handled mass murders, serial slayings, and LA’s highest-profile killings—meant the case was a five-alarm fire.

Caitlin shot her cuffs. “Into the breach.”

They walked toward the crime scene and the LAPD detectives came into the afternoon sun. The older of the two extended his hand.

Solis was in his early forties, solid, his white dress shirt bleach-bright in the harsh daylight. His partner seemed to squint against its glare as she shook their hands.

Weisbach was as slight as a yellow jacket. Her curls were shoveled atop her head. Her face was grim.

The house was chillingly quiet. The patrol cars, the ambulance, the medical examiner, and the crime scene unit had been and gone. Door jambs, walls, and the windowsill in the living room were sooty with fingerprint powder. The window, the killer’s entry point, faced the patio and back fence. Emmerich paused to evaluate it. The small yard was enclosed by white oleander.

Caitlin stopped beside him. “Hedge, fence, single-story homes on all three sides. Coming in that window, the intruder wouldn’t have been visible from any neighboring houses.”

Emmerich checked out the Christmas tree. Presents were arrayed beneath it. “Looks undisturbed.”

Solis grunted. “Theft doesn’t seem to have been the primary objective.”

They turned toward the hallway. Though the lights were on, it resembled a forbidding tunnel. Solis led the way.

The bodies had been removed from the master bedroom. Their blood remained. It covered the bed. It soaked one of the pillows, red drying to brown, with a watery ring along the stain’s outer edges. It splattered the headboard. Caitlin tried to absorb the scene impassively. The iron tang in the air made that viscerally impossible.

Emmerich stood in the doorway to get a broad vantage on the room. “Same MO as the first two attacks?”

Weisbach nodded and pointed at the coagulated blood on the pillow. “Husband was shot first. Andrew McKinley. Then the wife.”

“Did the killer take anything besides their wedding rings?”

“Don’t know yet,” Solis said. “House wasn’t ransacked. Killer left jewelry, cash, phones, laptops. Car keys. But relatives haven’t been able to bring themselves to look at photos of the scene, much less to walk through the house and tell us if anything’s missing.”

Solis’ voice was deep and surprisingly gentle. He rounded the bed to indicate a smear on the hardwood floor. “We think he stepped in Daphne McKinley’s blood when he approached her body to take the ring. Then wiped the shoeprint off the floor. And off his shoe.”

“A corner of Mrs. McKinley’s nightgown.”

Solis peered around the gloomy room. Yellow light filtered through opaque shades. The windows faced the street, and the police didn’t want anyone to get a look inside.

Solis’ shoulders looked laden. He had ashy circles beneath his eyes. “If he took anything else, we haven’t found evidence of it. No fingerprints, no blood smears on dresser drawers, jewelry boxes, cabinets.”

Rainey stepped out of the room into the hall. A dozen framed photos glinted dully on the wall. Halfway down, a smashed bedroom door dangled from a broken hinge.

Drawing a slow breath, she walked toward the doorway. When Caitlin caught up, they pushed the broken door fully open.

The bedroom belonged to a little girl. Pink accents, American Girl dolls. A globe on a bookshelf.

Rainey’s voice was tight. “The children?”

Detective Weisbach drew near. “With their grandparents.”

Caitlin stepped inside. The air felt cold. The closet door gaped open. Above the bed, long scratches striped the wall. They looked like the claw marks of an unearthly wolf, ripping into the house from another dimension. The iron tang again reached her nose. The claw marks had been drawn in blood.

She turned to Rainey. “We need to talk to those kids.” 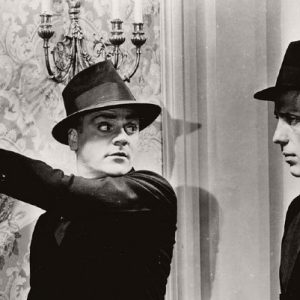 “One Last Job, Then I’m Out…”: Broken Resolutions in Classic Crime Films They say there’s no telling what the future holds for anyone, but that’s not quite true. With the new year now upon us, there’s...
© LitHub
Back to top