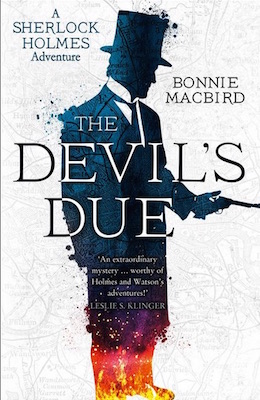 The following is an exclusive excerpt from The Devil's Due, by Bonnie MacBird. In 1890 London, Sherlock Holmes is a new celebrity for his deductive feats. But he’s also received some attention from an evil mastermind hellbent on ruing the reputations—and taking the lives—of England’s most celebrated citizens. When his brother goes missing, he’s forced to ask himself if being a celebrity is worth the risk.

The long thin wedge. I had heard Mycroft speak of it before. It was a metaphor, I suppose, for whatever he did at Whitehall. In the past, Holmes had hinted at his brother’s Machiavellian manoeuvring, but always in service of the greater good. However, it has been my experience that the more power a man has, the more challenging it is to retain the moral high ground. Whatever Mycroft did or didn’t do in service of the ‘greater good’, I only hoped that he shared the admirable code of honour of Sherlock Holmes.

I was never sure.

Mycroft Holmes lit a cigarette and offered the box to each of us. We declined and I moved the ashtray closer to him. At last Holmes sat down.

I had no idea how Mycroft knew nearly every move made by his brother. It was not a comfortable idea to contemplate.

Despite their differences of physique and temperament, the Holmes brothers did share uncanny skills of observation and deduction, and an astonishing ability to store an encyclopaedic range of facts. And both had developed mysterious, though I wager very different, ways of monitoring the events of their relative spheres of operation. I had no idea how Mycroft knew nearly every move made by his brother. It was not a comfortable idea to contemplate.

‘I have asked you here today, Sherlock, primarily to discuss this recent spate of unusual murders.’

‘At last. Which exactly?’

‘First, give me your further thoughts on that Danforth case.’

‘Curious. An act of remarkable violence on the part of the son.’

‘Out of nowhere, then?’ asked Mycroft.

‘I think not. There were strong signs of Charles Danforth’s instability, the family were aware of it, but the incident must have been set off by something. I do not know yet what that was.’

‘Someone gave a push, perhaps?’

‘Possibly. I do know that the killer was under the impression that his father’s will had been recently revised to favour the younger brother.’

‘And working alone. Perhaps now that Dr Watson has rejoined you, you will be more successful.’

I could sense Holmes’s suppressed anger. He sprang up again and moved to the bookshelves where he appeared to become unusually interested in the antique globes.

Mycroft continued to goad. ‘Up and down. Since you were a child. What about that Horatio Anson case? Unsolved?’

‘I was away when that came up. Curious, though, that a former shipbuilder was found dead in bed, fully clothed and dry, yet drowned. I intend to look into it further.’

‘Fellow who made a fortune with a series of barber shops, found with his throat slit with a razor?’ I exclaimed. ‘That was a strange one!’

‘Mmm,’ mused Mycroft. ‘Sherlock? You did not investigate that either?’

‘Away during that one as well. Upon my return, I found that Titus Billing had blocked my access to police files. I have asked Lestrade for a few in particular and expect to receive them shortly. Mycroft, this Billings is most inconvenient.’

He returned and sat down again next to me on the sofa. The two brothers faced each other for a long moment. Something passed between them. I became aware of an enormous clock ticking on the far wall. The clop of horses and sounds of carriage wheels hissing through the wet and icy streets made their way faintly through the curtained windows.

I took a sip of coffee. Something was being considered by the two brothers, I had no idea what. Holmes nodded, then remarked, casually. ‘All right. Yes, I see it. Of course.’

‘Significant philanthropy. All of the victims.’

‘Medical research, I believe. A rather large donation.’

‘And, of course, Clammory and the Veterans of the Boer War Fund,’ said Holmes. ‘That got quite a bit of publicity.’

‘And Danforth?’ asked Mycroft. ‘Any philanthropy?’

‘Literacy programmes for the poor. Very different modus operandi in each killing, though.’ said Holmes.

Mycroft nodded again. What was this about? I wondered. All of the murder victims were philanthropists? That seemed a spurious connection.

‘And other deaths in the family, immediately attendant,’ said Mycroft. ‘All apparently suicide.’

‘That is most interesting. Let’s see . . . with Danforth, yes. Clammory, unsure. No other deaths related to Anson?’

Mycroft smiled. ‘A sister in Dover jumped off a cliff, I read.’

They lapsed into silence, allies once more. Most puzzling. A minute passed. The Holmes brothers would explain themselves in due time, I supposed. I needed more coffee and looked around for the attendant.

‘But then we are missing a B,’ said Holmes.

‘Yes,’ said his brother. ‘Perhaps there has been a B’.

‘One that may not have appeared to be a murder.’

‘But was taken for an accident or a suicide.’

‘Precisely. I shall have a look,’ said Holmes.

‘What kind of bee are you talking about?’ I interjected at last. ‘I am not following.’

‘Watson, we are considering that these murders are linked, and by the same perpetrator,’ said Holmes.

I laughed. ‘Well, that is far-fetched.’

‘People who murder in series often leave some kind of sign so they will be credited for the kill. They want to be caught, ultimately,’ said Holmes. ‘Alphabet killings are not unknown. The “Alfabeto Mortale” in Rome in the last century comes to mind.’

‘And don’t forget the “Alfabetmord” in Norway,’ said Mycroft. He laughed, a mirthless huffing sound.

‘Ah yes, the “Norwegian Capper”. Left clown hats on all his victims. All quite famous cases, Watson. I cracked the Norwegian one myself three years ago.’

‘A double signature, Watson. The alphabet. And the hats,’ said Holmes.

‘What of that Tarot card, The Devil? Found under Anson’s pillow,’ said Mycroft. ‘It was in the papers. A signature of sorts?’

‘I read that, yes. But found at none of the other murders,’ said Holmes.

‘Unless it went unreported. Or Titus Billings missed it,’ said Mycroft.

‘Which is credible. He is careless,’ said Holmes.

‘But not stupid, Sherlock. Take care.’

‘A Tarot card?’ I interjected. ‘Like the one planted on me?’

‘Ah, interesting,’ said Mycroft. ‘Planted? At the park? Do you have it?’

At the park? How had he known this?

Holmes produced it from his pocket and held it up, facing his brother.

Mycroft smiled, not deigning to take it. ‘Yes, interesting.’ He turned to me. ‘Who planted it? Did you notice?’

It was placed in Watson’s pocket as we were set upon by a crowd at Speakers’ Corner, clamouring to find the Devil in me.’

‘Ah yes, I heard about that. I understand Zanders was there. He is employing fellows to follow you, you know.’

‘Yes. It is a veritable crowd, with your man following as well.’I was surprised at this, as I had not noticed any followers.

‘Careless of you to become embroiled with that Faginesque creature at Speakers’ Corner, Sherlock. Let me see the card.’

I felt a tinge of guilt. Had we left when Holmes wanted to, all that might have been avoided.

Mycroft took the card from his brother and examined it with the small glass hanging from one of his watch chains. He handed it back. ‘Ordinary. Not likely to be traceable.’

‘My thoughts as well.’

‘I wonder if it is exactly like the one at Anson’s body. Worth pursuing, Sherlock, if you feel you are up to the game.’

‘You did not summon me here merely to chastise me!’ said Holmes.

‘No, for several reasons. But primarily to discuss this series of murders.’

‘You are holding back something, Mycroft. What is it?’

Outside in the hall there was the sound of high-pitched male laughter and the door swung open.

‘Ah, they are here. You have more to learn in a moment.’ 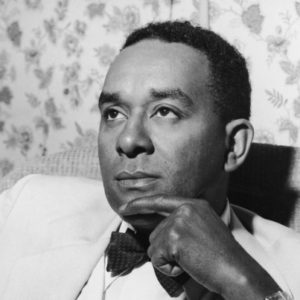 The Strange Story of Richard Wright’s Lost Crime Novel, Savage Holiday Since discovering the books of Richard Wright when I was a teenager hanging out at Hamilton Grange Library in New York City,...
© LitHub
Back to top