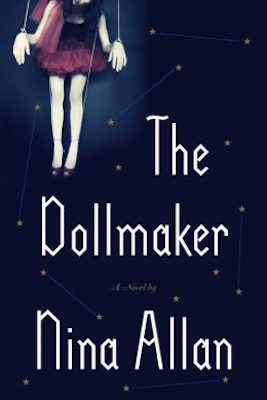 The following is an exclusive excerpt from The Dollmaker, by Nina Allan. A mysterious personal ad in a newspaper connects a solitary dollmaker and a traumatized woman haunted by her strange, lonely past. As they travel to meet one another, they must confront their respective sufferings and hope that they can overcome them, for a chance at a happy ending.

After crossing the Albert Bridge, the train seemed to enter not just another county but another world. Rolling green hills were replaced with scabrous, parched-looking moorland, whitewashed cottages with angular, bare-faced homesteads constructed from granite and surrounded by loose agglomerations of rickety-looking outbuildings, roofed with asbestos shingles or corrugated iron. Here and there, the broken towers of abandoned tin mines reared up from the sparse vegetation like ruined castles.

The landscape seemed derelict, barren. The train called at numerous one-horse stations along the route, disgorging clumps of disheveled passengers onto mostly empty platforms. Eventually, even the straggling villages petered out, and there was nothing beyond the windows but the dung-colored, featureless expanses of Bodmin Moor.

It took most of another hour to reach Bodmin itself. I was alone in the carriage by then, although I had once again become preoccupied by the conviction that I was being watched, that there were CCTV cameras somewhere, or a two-way mirror. I stared fixedly at a poster over the door, an advertisement for an amusement park somewhere near Land’s End, wondering if it might conceal a hidden microphone. I knew these ideas were ridiculous even as they occurred to me, but ever since boarding the train I had felt like a fugitive.

It was the doll, of course – “Artist,” my secret cargo. I was a thief, a common thief. In my head the words sounded outrageous, even comi- cal, yet they remained true, nonetheless, and my increasing awareness of that fact and of the doll’s presence only made them seem more so.

Article continues after advertisement
You set me free. Don’t I deserve to be free? Museums are no place for the wicked. I’d rather be in a prison than in a museum.

Don’t sweat the small stuff, “Artist” murmured. You set me free. Don’t I deserve to be free? Museums are no place for the wicked. I’d rather be in a prison than in a museum.

I understood what she meant, though I doubted a court of law would be so easily swayed.

As the train ground to a halt, I disembarked in front of a small cluster of granite buildings: a stationmaster’s house, a boarded-up waiting room, and the ticket hall itself, which appeared to be unat- tended. There was no one about and, after a minute or two of waiting, the train released its brakes and sidled away. I glanced briefly at my watch: ten to five. I realized it was pointless to think of going on to Tarquin’s End that evening, that I would have to look for somewhere to stay in Bodmin itself.

I passed through the station building to the access road beyond, then set off in what I took to be the direction of the town center. My holdall was heavy and I felt very tired. I cursed myself for not having foreseen the necessity of booking ahead – I had planned my earlier overnight stops so carefully, so why not this one? I could only suppose it was because I had found it difficult to imagine anything beyond my meeting with Bramber. I hoped it would not be too dif- ficult to find a reasonable hotel, though the desolate air of the town’s approach road was not exactly encouraging.

Bodmin town center, when I finally reached it, was larger than I expected and not so down-at-heel as I had feared. Neatly kept granite houses lined the high street, which led on to a central square, planted with trees. Facing onto the square I noted a variety of local businesses, now mostly closed for the day. Cars stood parked at the curb, their erstwhile occupants gathered on wooden benches outside a pub. The pub was called The Tarquin. As well as the chalkboard menu and a banner advertising a Sunday carvery I was relieved to see a signboard for bed and breakfast.

I made my way briskly through the crowd of evening drinkers and into the saloon. The man behind the bar had shaggy, shoulder-length black hair and wore a T-shirt printed with a design of a fist clutching a rose. When I asked him if there were any vacancies, he said there were two rooms left, one with an en suite bathroom and one without. I asked to see the room with the bathroom. I had made up my mind to take it, whatever, at least for tonight.

The Tarquin must have been twice the size of the Bluebell Inn at Wade. It was also much older. The downstairs consisted of two large bar areas and a billiard room. A staircase near the public lava- tories gave access to a long upper landing leading to five or six bedrooms. The uncarpeted floorboards were creaky and uneven, blackened with age.

“This is the en suite,” said the barman, opening a door. “Overlooks the backyard, so it’s quiet enough.”

He had not offered to carry my holdall. I couldn’t decide whether this oversight had arisen out of rudeness or out of respect.

I had not expected much from the room, and my first impressions were of dowdiness and mild discomfort. The space was dominated by an enormous brass bedstead, the mattress covered by an ancient- looking eiderdown patterned with roses. A worn rug lay on the floor to one side of the bed, but otherwise the boards were bare. There was a half-height gentleman’s wardrobe in one corner and a straight-backed wooden rocking chair in another. There was no television. An inner doorway led to the en suite facilities, which consisted of an old-fashioned, high-cistern toilet and a chipped enamel bath.

“Breakfast’s from half-past eight,” said the barman. “If you want it, that is.”

I wasn’t sure which he was referring to, the breakfast or the room.

The barman nodded, then handed me an iron Chubb key attached by a piece of string to a wooden number three. It wasn’t until after he’d gone that I saw that the room truly was beautiful, after all, the simple arrangement of necessary objects creating an ambience of quiet authenticity that made my room at the White Hart seem false and ostentatious by comparison. The well used furniture had a comforting solidity, the waxed floorboards shone pale gold in the evening light. On a low table at the foot of the bed stood a china tea service, together with a radio with a leather hand strap and a Bakelite case.

I crossed to the window. Immediately below lay a concrete yard. A row of wheelie bins stood lined up against the retaining wall. On the other side of the wall was West Moor, a vast tract of lichen and heather, on fire with gorse. Birds darted amidst the twilight, gathering insects. A woman passed along the horizon, walking her dog. I stood quietly for ten minutes or so, relishing the stillness and taking in the scene in front of me as if it were a sequence from some minor but visually arresting art-house film. Nothing was happening, and yet everything was. It was as if my life, for those brief moments, were being held in stasis. There was no past, no future, just that room and its contents and the view beyond.

It occurred to me that my journey could end here, that I could spend this one night in The Tarquin, then instead of going on to Tarquin’s End I could return to Bodmin Station and from there, home.

What if Clarence was right, and my relationship with Bramber Winters was all in my head? A fantasy that, were it revealed to her, could only provoke embarrassment and revulsion.

At least if I backed out now there would still be our letters. Letters contained worlds after all, you could read anything into them. You don’t mean that, surely? “Artist” hissed at me from the holdall. I know people call you names, but “coward” has never been one of them.

Her. She didn’t even have a name, only “Artist,” which surely said everything about the kind of madness she had inspired in me. I turned away from the window and seized the holdall, dragging it from where I had deposited it just inside the doorway into the space between the bed and the entrance to the en suite. I felt suddenly appalled at the prospect of opening it, at being confronted with the evidence of the crime I had committed.

I would have to admit then that the doll was there, that I really had stolen her. The action seemed already distant, impossible, and yet it had happened.

She was lying on her back, apparently sleeping. As I raised her slowly towards me her eyes flew open. The green transparency of her gaze – bright as phosphor – was almost shocking. I had thought her expression imperious. Closer to, it seemed defiant, the expression of an elf queen on the warpath. You think you command me, sir? Then think again.

I was also disconcerted to discover that her hair was real. Such a detail should not have surprised me – synthetic dolls’ hair remained uncommon until the 1950s and, even then, many of the smaller manufacturers stuck with mohair because it was cheaper and more readily obtainable. Yet something about “Artist’s” auburn tresses unsettled me deeply. I remembered Ewa Chaplin’s flight from Poland, from Hitler’s armies, and from there I found it was impossible not to think of the Nazi death camps, the vast mounds of human hair that had been left behind in the wake of genocide. Such images were disturbing, inappropriate, and yet they persisted.

You should understand that I felt no love for her. I realized that in taking “Artist” I had transgressed, not merely against the law but against the boundary between the kingdom of reason and the world of desire. In ways I could but dimly understand, I was now her prisoner. I began to wonder if she had engineered this even, drawing me to her in the knowledge that she was my fate, and I hers.

My act of theft, when I thought about it now, seemed ludicrously easy: the preoccupied attendant, the open door, the silent alarm bell. Even a practiced felon could not have bargained for such a cavalcade of lucky coincidences, might have considered the challenge unwork- able and therefore dangerous.

Counting Down the Greatest Crime Films of All-Time: #37 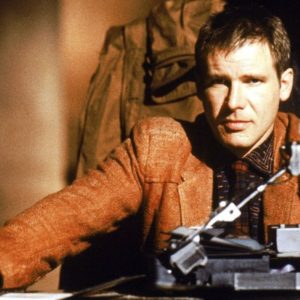