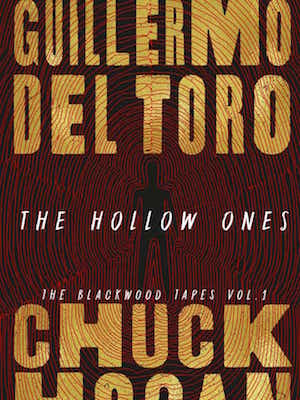 The following is an exclusive excerpt from The Hollow Ones , by Guillermo del Toro and Chuck Hogan. It shocks FBI Agent Odessa Hardwicke that she'll have to shoot her partner, who turns violent out of nowhere while apprehending a murderer. But when the bullets strike him she notices a shadow leave his body, and she won't be able to explain what has happened without Hugo Blackwood, a man who claims to have been alive for hundreds of years.

The first emergency call came from Teterboro, saying a private jet had taken off without tower authorization. The aircraft had banked due east, over Moonachie and across Interstate 95 toward the Hudson River. The aircraft was assumed stolen and flying in an erratic pattern, rising and falling a few thousand feet in altitude, occasionally disappearing below the range of the radar.

The Port Authority of New York and New Jersey issued an emergency alert. Teterboro was shut down in accordance with FAA regulations, suspending all pending flights and redirecting inbound air traffic to Linden Municipal Airport, a small airfield in southern New Jersey used primarily for sightseeing tours and helicopters.

The first citizen 911 call came from the operator of a tugboat in the Hudson River, less than a mile south of the George Washington Bridge. He claimed that an airplane with no lights had flown very low between the tug and the bridge, making “popping noises” in the rain. The operator said it sounded like the pilot was throwing firecrackers at his boat, and feared it was the start of “another Nine Eleven.”

The second 911 call came from a fashion executive driving home to Fort Lee on the George Washington Bridge who reported seeing “a large drone” headed toward the Upper West Side of Manhattan.

There followed a flood of emergency calls from Manhattan residents, claiming that an aircraft had buzzed their apartment building or place of employment. The airplane was spotted over Central Park, heading due south along Fifth Avenue, but difficult to eyeball as it was flying dark. The pattern of the calls traced a flight path cutting diagonally across Lower Manhattan over Greenwich Village, then back toward the Hudson.

The Staten Island Ferry was cruising within sight of the Statue of Liberty when the Beechcraft swooped down on its stern. The only lights were the bursts of flame from the muzzle of the automatic rifle firing out the right side of the cockpit. Rounds picked at the orange hull of the MV Andrew J. Barberi, some cracking through the windows of the passenger space. Two commuters were directly injured by gunfire, neither gravely. Seventeen passengers were more seriously injured in the ensuing panic, causing the ferry to turn around and return to the Lower Manhattan terminal.

Three bullet holes were later found in the copper exterior of the crown and torch of the Statue of Liberty, but no injuries were reported there.

The Beechcraft made a hard turn west, back into New Jersey airspace. It was spotted over Elizabeth on a course heading to- ward Newark, New Jersey’s most populous city, knifing through the evening rain.

Reports followed of a second aircraft over southern New Jersey, but these were later confirmed as sightings of the same aircraft.

The aircraft’s altitude dipped as low as one hundred feet at times. An eagle-eyed bus passenger on a bright section of the Jersey Turnpike noted the N number on the plane’s fuselage and texted it to the state police.

Police sirens pierced the night all across the metro Newark area as cruisers raced toward airplane sightings, but ground municipal deployment was completely ineffective. Within minutes the aircraft was sighted over the Pulaski Skyway, then Weequahic, then Newark Bay, then the MetLife Stadium in the Meadowlands.

He responded with his mouth full of it, “Best I ever had.”

Odessa shook her head, then caught the server’s attention with a shake of her empty coffee mug. She was going to need the caffeine. They were working on the Cary Peters corruption case, the former deputy chief of staff to the governor of New Jersey ensnared in a widening scandal. Peters had resigned three months ago in what now looked like an attempt to squelch the investigation and keep it from moving inside the governor’s office. The active part of the case had only recently died down. The ensuing scandal had rocked Peters’s personal life, as well as his professional life. (Reimbursing oneself $1,700 for a night at Scores gentlemen’s club from your boss’s campaign fund will do that.) Taking a bullet for the governor had come at a great cost. Television news and tabloid reporters swarmed all over his and his wife’s and family’s lives as they were going through a white-hot breakup. It got so bad that the city of Montclair, where they lived, established NO PARKING ZONES outside his house on the advice of the police department, in order to keep the zealous press away.

Peters had since gone into a tailspin that included being booked for a DWI earlier in the month. One online news site maintained a counter on its homepage estimating the number of days before Peters cracked and cut a deal with prosecutors to save his own skin, turning on the governor in this rapidly widening scandal.

For the FBI, and specifically for Leppo and Odessa, the investigation had entered the paperwork stage. The FBI headquarters at Claremont Tower was working around the clock thanks to recently released documents from the statehouse and the governor’s campaign committee. Odessa and Leppo had spent each of the previous four nights reading through emails, employee contract agreements, and expense reports. Most investigative work in the modern digital age involves forensic computer analysis and decoding the voluminous digital footprints and fingerprints we all leave behind.

This is why the FBI likes to hire lawyers.

This dinner in this iffy diner in a blighted section of one of the most dangerous cities in America was Odessa’s only respite from the nightly document slog. With that in mind, she could have listened to Leppo talking with his mouth full all night.

Their phones, both screen-down on the table, simultaneously began to vibrate. They quickly checked them, knowing that it was never good news when their phones bugged out at the same time.

Surprisingly, it was not a text about work. It was a news alert from the New York Times. An airplane hijacked out of Teterboro had buzzed Manhattan with unconfirmed reports of automatic gunfire coming from the cockpit. Live updates scrolled below the headline report. The aircraft had apparently crossed the Hudson River. Its most recent sighting was near Newark.

“Shit,” said Leppo. He forked a huge chunk of meat loaf into his mouth while plucking his napkin from his lap. Odessa knew that her coffee would have to wait. It was always better to get moving first, rather than being called upon to respond. Odessa quickly visited the ladies’ room, as experience had taught her, while Leppo went to the front cashier with his credit card.

Leppo was already outside in the rain with a free real estate circular tented over his head when Odessa hit the door. At a break in the headlights, they crossed the street under the cold rain, skirting a gutter puddle and striding north toward their unmarked silver Chevy Impala.

With the falling rain and the automobile tires whisking along the wet asphalt beside them, Odessa did not hear the airplane’s twin engines until they were almost immediately over her head. The dark plane knifed through the stringy rain, wings pitched slightly to one side, the underbelly of the fuselage passing not two hundred feet above them.

It was there, and then it was gone. Unreal.

Odessa stopped so fast, Leppo bumped into her from behind.

Sirens replaced the fading roar of the plane’s engines. A cruiser went screaming past them into the cross street as Odessa slid into the driver’s seat of the Impala.

Leppo was already on his phone, talking to somebody at Claremont. The top six floors of the Claremont Tower overlooked Newark from the shore of the narrow brown Passaic River.

“Where to?” Odessa asked him, watching more blue lights plow through the spit.

“Don’t bother trying to follow it,” said Leppo, pointing her left at the intersection. Back to Claremont, then.

Leppo punched the phone audio through the Bluetooth of the automobile dash. “Davey, we were on dinner, we just saw it, what’s the word?”

“Otis air base,” said Leppo, incredulous. “To do what? Shoot it down over Hoboken?”

“If that’s what it takes. He’s been back and forth across the Hudson, stunting, doing fly-bys, shooting up the city.”

Odessa pulled over for another police cruiser, which went blasting past, going the opposite direction they were.

“Plane is reg’d to the CEO of Stow-Away Corporation. That’s a rental storage facility company, those big, boxy orange buildings. Suspected stolen, though. We have one dead on the ground at Teterboro, an airport worker. Hold on, Walt—”

The audio went muffled as Davey put his hand over the microphone, calling out to another agent nearby. Odessa and Leppo looked at each other.

“Stow-Away,” she said, feeling a dark ping in her chest.

The CEO of Stow-Away, a man named Isaac Meerson, was a major donor to the New Jersey Republican Party… and a close friend of the governor of New Jersey, and Cary Peters.

“What can’t be?” said Davey, coming back on the line.

“Stow-Away is getting pulled into the Peters corruption case Hardwicke and I have been working. Any description of the hijacker?”

Odessa was at a red light. The wipers worked frantically, making the traffic light look like it was flashing. “What should we do?”

“Peters has been depressed and basically off the grid,” said Odessa. “There was that thing about the wife in the paper yesterday—”

“Her filing for divorce? No surprise there, though.”

Odessa knew Leppo well enough to sense that he was keying in on Peters now. “Stealing a plane? That’s way outside his profile.”

“He had taken flying lessons,” she said. “Remember? Stopped short of getting his license due to anxiety attacks. That was all on his background.”

Davey’s voice came back again. “Okay, I’ve got nothing on the hijacker yet.”

“Northwest from Newark,” he said. “Over Glen Ridge. That’s the latest I got. Hey, Walt, I gotta go—”

“Heading toward Montclair,” said Odessa. It was all happening so fast. “Do you think…?”

Leppo finished her thought. “He would crash an airplane into his own house?”

Odessa said, “It’s not going to be his house for very long. His wife’s house.”

Leppo nodded. It was decided. “Light it up.”

Odessa reached under the center console, flipping the switch that activated the Impala’s grille lights, blue and red, front and rear. She punched the gas and started weaving through traffic toward the nearby town of Montclair.

No Woods So Dark As These 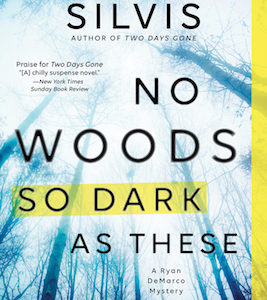 No Woods So Dark As These Now is the winter of our discontent… Dive, thoughts, down to my soul. —William Shakespeare, Richard III A light vapor...
© LitHub
Back to top