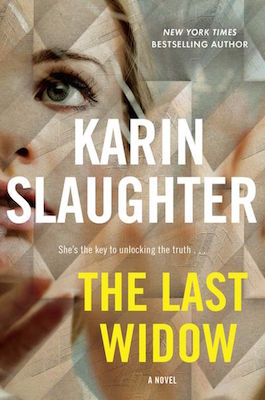 The following is an exclusive excerpt from The Last Widow, the new thriller from Karin Slaughter. The ninth in the Will Trent series, it begins with the abduction of a CDC scientist, an event which grows more mysterious when the CDC is bombed, a month later. Georgia Bureau of Investigation agent Will Trent and medical examiner Sara Linton must figure out why this institution has been targeted, but when Sara is kidnapped, Will doesn't have long to rescue her, and put all the pieces together.

“Where are they taking her?” Will grabbed Hank by the shirt and gave him a violent shake. “Tell me where, God dammit!”

Hank stared up from the bloody pulp of his face. His teeth were broken. His nose was bent to the side. His jaw was crooked.

Will scooped up the revolver from the sidewalk. He cocked the hammer. He took aim.

Will felt the same jolt of recognition. Sara’s voice, but not her voice.

“She’s gone!” Cathy gripped the shotgun with both hands, shaking with grief. “You let them steal my daughter!”

His eyes started to water. He had to squint against the sunlight.

“You did this!” Cathy stared straight at him. Straight into him. “My son-in-law would’ve never let this happen.”

Will felt her words harder than any blow he’d ever taken. He uncocked the hammer on the gun. He wiped his mouth with the back of his hand. He forced the part of his brain that understood Cathy was right to shut down.

A siren whooped. An Atlanta police cruiser screeched to a stop ten yards away.

Will tossed the revolver onto the sidewalk. His hands went into the air. He told Cathy, “Put down the—”

“Put it down!” the cop screamed. He rested his gun on the open door of his cruiser. “Now!”

Slowly, Cathy placed the shotgun at her feet.

She raised her hands.

“I’m GBI.” Will worked to keep his tone even. “This is one of the bombers. He had a team. They abducted a wo—”

“I don’t have my wallet. My badge number is 398. A woman was—” Will had to stop. Vomit had rushed up his throat. He spit it out. “A woman was abducted. Silver BMW. License plate—” Will couldn’t remember the number. His brain felt like a balloon that was trying to float away. “BMW X5 hybrid. There are four more men. Three.”

Will had to close his eyes to stop the world from spinning. Three men? Four? Merle’s dead body was between him and the cop. Hurley had been beaten senseless.

“The radios are jammed.” The cop hesitated. He wanted to believe Will. “Phones are down. I can’t—”

Will didn’t have time for this shit.

He picked up Hank and threw him against the hood of the cruiser. He wrenched together Hank’s wrists and pinned them together with one hand. He kicked out his legs. He patted down the man’s pockets. Android phone. Folded money. Some coins. Driver’s license and an insurance card.

Will matched the photo on the license to Hank’s face. He watched the tiny letters of the name jump like fleas across the white background. He handed over both to the cop. “I don’t have my glasses.”

“Hurley.” Will saw the bullet hole in the back of his leg. He wanted to jam a pencil into it. “He’s going to bleed out. We have to get him to the hospital.”

Will grabbed Hurley up by the collar. He stumbled, the road tilted like a funhouse.

“Open the door.” Will shoved Hurley into the back and slammed the door so hard that the car rocked.

Will braced his hands on the roof. He closed his eyes, trying to regain his equilibrium. He was suddenly aware of all of the pain in his body. His knuckles were broken open. Rivulets of blood were streaming down his neck. There were no words to describe what was going on inside his belly. Every single organ felt like it was strapped tight with a thousand rubber bands. His ribs had turned into straight razors.

Will walked around the car. The front door was at the wrong end of a telescope. He blinked his eyes. He fumbled for the handle.

The minute he was inside, the car lurched forward.

Will didn’t look at Cathy as they pulled away.

She called his name.

Sara’s voice, but not her voice.

The cop said, “I’m getting something.” He had his phone to his ear. “It’s ringing.”

“A woman was—” Will felt his stomach clench. He leaned over and threw up into the floorboard. The splatter went everywhere. He had to wipe it off of his face. “Sorry.”

The cop rolled down the front windows.

Will’s eyes started to close. He could feel his body wanting to give up. He told the cop, “Silver BMW. Michelle Spivey was with them.”

“They were a team. Cops. Military.”

“Shit. It stopped ringing.” the cop hung up the phone and dialed again. The cruiser cut into the empty lane. Coasted through Emory Village. There were people on the sidewalk running toward the hospital. Druid Hills was filled with doctors and medical support staff and people from the CDC. They were all doing what Will and Sara had done—getting to the site of the disaster as quickly as possible.

Will’s vision fought him as he tried to look at his watch. It took all of his focus to make the numbers sharpen.

Will felt the anvil lift off of his chest. The call had finally gone through.

“I need the commander. I’ve got one of the bombing suspects in custody. I have details on—”

“S-shilver BMW X5.” Will heard his words slur. “Three sushpects. They abducted two wahh—” He couldn’t get the information to come out. His head didn’t want to stay upright. “Amanda Wagner. You need to fah…tell…tell her they took Sara. Tell her…”. He had to close his eyes against the sunlight. “Tell her I fucked up.” 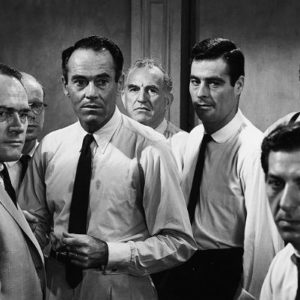 The 7 Most Suspenseful Jury Verdicts In Literature and Film So there we all were, packed into the media holding pen at some hotel in Providence, Rhode Island. For four days in June...
© LitHub
Back to top