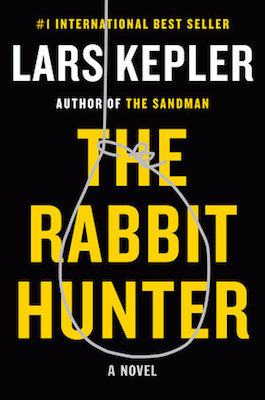 The following is an exclusive excerpt from The Rabbit Hunter, by Lars Kepler. The Rabbit Hunter is the name of a brutal serial killer whose long, slow attacks begin with the evocation of a nursery rhyme. Only Joona Linna and Saga Bauer can stop him—and they must race to catch this sadistic killer who loves to take his time.

Sofia makes her way quickly along the wall and past the stairs, until she reaches a narrow closet door. She grabs the handle and pulls.

She watches the man walk up the stairs through the prisms of the chandelier.

She walks back towards the stairs and crouches down on the floor, hidden by the dry-cleaned shirts. If he looks directly at them he’ll see her, but if he just walks past she’ll have a few seconds’ headstart.

Her hand hurts so much that she’s shaking, and her neck and throat are swollen.

The steps are old and worn, and the staircase creaks. She sees him between the banisters and shrinks back cautiously.

Wille reaches the top and walks down the hallway.

He walks towards the bedroom without noticing the blood she’s left on the carpet.

Carefully she gets to her feet, watching his back and suntanned neck.

She walks silently around the railing and starts to run down the stairs.

She realizes that he’s turned around, and is already coming after her.

The thudding footsteps speed up.

She clutches the throbbing, bleeding fingers of her injured hand with her good one.

All she knows is that she has to get out of the house. She rushes through the large entryway, hearing the harsh creak of the stairs as the man comes after her.

Sofia runs over a narrow carpet towards the door. She trips over a pair of shoes but keeps her balance.

The alarm-system is glowing on one side of the front door.

Her fingers are so wet with blood that the catch slips out of her hand. She wipes her hand on her dress and tries again, but it won’t budge. She pushes the handle down and shoves the door with her shoulder, but it’s locked. Her eyes dart around, looking for the keys as she tries twisting the catch again. She gives up and runs through the double-doors leading to the living room.

Something metallic hits the floor in another room.

She moves away from the large windows, her own reflection a silhouette against the pale wall behind her.

She hears him coming from the other direction, retraces her steps and hides behind one of the doors.

“Every door is locked,” he says loudly as he enters the living room.

She holds her breath, her heart pounding in her chest, and the door creaks gently. He stops in the doorway. She can see him through the crack between the hinges, his mouth half-open, his cheeks flushed.

Her legs start to shake again.

He walks a few more steps, then stops to listen. She tries to keep quiet, but her frightened breathing is loud.

“I’m tired of this game now,” he says as he walks past her.

She hears him searching for her, opening doors and closing them again. “I just want to talk to you,” he calls from another room.

Furniture scrapes the floor, then silence.

She listens. She hears her own breathing, and the ominous ticking of a clock, but nothing else.

She waits a little longer, listening for creeping footsteps, knowing this could be a trap, but still chooses to leave her hiding-place, because this could be the only chance she gets.

She creeps further into the living room. Everything is quiet, as if the house is enveloped in a hundred-year sleep.

Sofia goes over to one of the chairs around the polished table and tries to lift it, but it’s too heavy. Instead she drags it by its back with her one good hand, pulling it towards the windowed patio doors, groaning with pain when she has to use both hands. She runs two steps, spins her body, and yelps as she swings the heavy chair against the glass.

The chair hits the window and falls back into the room. The inner pane shatters and falls to the floor, scattering splinters of glass everywhere. Larger pieces slide down and are left leaning against the intact outer glass.

The burglar alarm starts howling at an ear-splitting volume.

Sofia grabs the chair again, ignoring the fact that the splinters are cutting her feet, and is just about to swing it against the window when she sees Wille coming towards her.

She lets go of the chair and walks straight into the big kitchen, her eyes darting across the white floorboards and stainless-steel countertops.

He follows with measured steps.

She remembers being chased as part of a game when she was little and the feeling of impotence when she realized her pursuer was so close that there was no chance of escape.

Sofia leans against the countertop for support and manages to knock a pair of glasses and a strange bracelet to the floor.

She doesn’t know what to do. She looks over at the closed patio doors, then goes over to the island unit, which has two sparkling saucepans standing on top of it, and yanks the drawers open with shaking hands, panting hard. She finds herself staring at a row of knives.

The man comes into the kitchen and she picks up one of the knives and turns to face him, backing away slowly. He stares at her, clutching a soot-stained poker he must have picked up from the fireplace in both hands.

She holds the broad-bladed kitchen-knife up at him, but realizes immediately that she doesn’t stand a chance.

He could easily kill her. His weapon is much heavier.

The alarm is still shrieking. The soles of her feet are stinging from where she’s cut them, and her injured hand feels numb.

“Please, stop,” she gasps, backing into the island unit. “Let’s go back to bed. I promise, I won’t give you any trouble.”

She shows him the knife, then puts it down on the stainless steel counter and tries to smile at him.

“You don’t have to do that,” she pleads. She feels like she’s losing control of her face.

“I’m going to hurt you badly,” he says, raising the improvised weapon above his head.

“You only have yourself to blame,” he interrupts, then unexpectedly lets go of the poker.

It falls heavily to the floor with a clatter, then lies still. Ash flies up from the prongs.

The man smiles in surprise, then looks down at the circle of blood spreading out from his chest.

“What the hell?” he whispers. He fumbles for support with one hand, but misses the counter and staggers.

Another bloodstain appears in the middle of his white shirt. The red wounds on his body blossom like stigmata.

The man presses one hand to his chest and starts to stumble towards the dining room, but stops and turns his blood-smeared palm over. He looks like a frightened child. He tries to say something before sinking to his knees

The man presses one hand to his chest and starts to stumble towards the dining room, but stops and turns his blood-smeared palm over. He looks like a frightened child. He tries to say something before sinking to his knees.

Blood squirts out onto the floor in front of him.

The alarm is still blaring.

Sofia sees a man with a very oddly-shaped head over by the pale curtains.

He is standing with his feet wide apart, and he’s holding a pistol with both hands.

A black balaclava covers his entire face apart for his mouth and eyes. What look like strands of hair or stiff scraps of fabric hang down one cheek.

Wille presses his hand to his chest again, but the blood seeps through his fingers and down his arm.

Sofia turns unsteadily and looks straight at the man with the gun. Without taking his eyes from Wille, he takes one hand off the pistol and quickly snatches up the two spent shells from the floor.

He runs forward, passing her as if she doesn’t exist. He kicks the poker away with his military boot, grabs Wille by the hair, yanks his head back, and presses the barrel of the pistol against his right eye.

This is an execution, Sofia thinks, and walks towards the living room as if in a dream. She hits her hip against the edge of the counter, and runs her hand along it. As she passes the two men, a shiver runs down her spine and she starts to run but slips in the blood. Her feet slide away from her, and she falls back and hits her head hard on the floor.

Her vision blurs and goes black for a moment, then she opens her eyes again.

She sees that the strangely dressed man hasn’t pulled the trigger yet. The barrel is still pressing softly against Wille’s closed eyelid.

The back of Sofia’s head is burning and throbbing.

Her vision is unfocused, everything is spinning. What she had thought were rough leather strips hanging down the man’s cheek now look more like wet feathers or matted hair.

She shuts her eyes as dizziness clutches at her, then hears voices above the loud wail of the alarm.

“Wait, wait,” Wille pleads, breathing fast. “You think you know what’s going on, but you don’t.”

“I know that Ratjen opened the door and now…”

“And now hell is going to devour you all,” the masked man concludes.

They stop talking and Sofia opens her eyes again. A peculiar slow motion seems to have taken a hold of the house. The masked man looks at his watch, then whispers something to Wille.

He doesn’t answer, but it looks like he understands. Blood is welling from his stomach, pouring down to his crotch. It forms a puddle on the floor.

Sofia sees that his glasses are lying beside her on the floor, next to the object she initially thought was a bracelet.

Now she realizes that it’s a personal alarm.

A small steel gadget with two buttons, attached to a watch-strap.

The masked man is standing perfectly still, looking at his victim.

Sofia carefully moves her hand sideways towards the alarm, tucks it against her body and presses the buttons several times.

The man lets go of Wille’s hair but continues to press the barrel of the pistol to his right eye. He waits a few seconds, then squeezes the trigger.

There’s a loud click as the bolt hits home. Wille’s head is thrown back and blood cascades from his skull. Fragments of bone and gray matter spray across the kitchen floor, all the way to the dining room.

Sofia feels warm drops spatter her lips as she sees the empty cartridge fall and bounce across the floor.

A cloud of gray powder hangs in the air, and the dead body falls to the floor like a sack of wet clothes and lies there motionless.

The masked man bends over to pick up the shell and his watch slips down towards the back of his hand.

He stands with his legs on either side of the dead body, leans forward and presses the barrel of the pistol to the corpse’s other eye. He flicks his head to shake what looks like matted hair away from his face before squeezing the trigger again.

Excerpted from The Rabbit Hunter. Copyright © 2020 by Lars Kepler. All rights reserved. No part of this excerpt may be reproduced or reprinted without permission from the publisher. 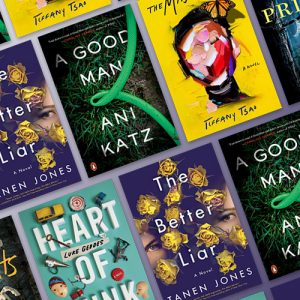 January's Best Debut
Crime Fiction Breaking into the crime game isn’t easy, but every month, a few brave and talented souls make a go of it. For readers,...
© LitHub
Back to top