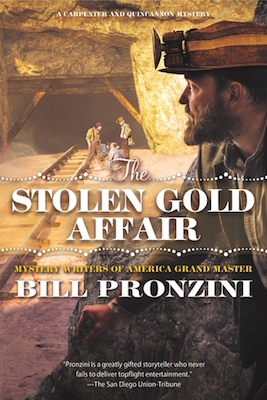 The following is an exclusive excerpt from The Stolen Gold Affair, by Bill Pronzini. Sabina Carpenter and John Quincannon are back, in their eighth mystery together. They're about to get married, but before they do, Quincannon must go undercover as a miner to investigate a string of gold robberies, while Carpenter must look into a real-estate scam, as well as the upsetting life of an abusive man.

“I am Everett Hoxley.”

“I hope you shall be,” Hoxley said, and nodded again. He had lived fifty years, if the newspaper articles about him were accurate, but he might have passed for a gent on the near side of forty. Lean and trimly fit, smooth-shaven cheeks a healthy hue, gray-green eyes clear and bright, authoritative demeanor showing the same vigor as his nods. He obviously made regular use of the club’s facilities. He wore an expensive light gray business suit, but there was no question that he would strike an equally impressive figure in athletic garb. “Be seated, Mr. Quincannon.”

When Quincannon occupied the table’s only vacant chair, Hoxley introduced the other man as James O’Hearn. Just who O’Hearn was he didn’t say, but to Quincannon’s practiced eye the man bore the stamp of a hardrock miner out of his element. He was as unlike Hoxley as it was possible to be. Matted brown hair thicker and more coarse than Quincannon’s whiskers covered his face, likewise his wrists, the backs of his fingers, and no doubt the rest of him except for the crown of his head, which was as barren as a desert knob. The overall image he presented was that of a scalped grizzly bear stuffed into an ill-fitting broadcloth suit. It was plain that even in these genteel surroundings he would have been more comfortable in miner’s garb. No refined athlete, O’Hearn. Whip-hand mine boss and barroom brawler was more like  it.

“I do not believe in wasting time or breath,” Hoxley said, “so I will get right to the point. You have been recommended as a highly competent investigator willing to undertake difficult assignments. True?”

“True enough. Though if I may say so, ‘highly competent’ doesn’t quite describe my abilities.”

“No? How would you describe them?”

“As unparalleled. There is no better detective in the Western states.”

O’Hearn grunted and spoke for the first time in a growly voice that matched his bearlike appearance. “Think a lot of yourself, don’t you?”

“With just cause. My  accomplishments speak for themselves.”

Hoxley said with yet another head bob. “I like a man who speaks plainly and without false modesty. What do you know about gold mining? Specifically, the physical operation of a large mine. Do you feel you could pose as a miner well enough to avoid detection?”

“I have no doubt that I could,” he said. “For what purpose?”

“To identify the individuals responsible for theft at a high-grading operation in a mine owned by Hoxley and Associates, and to put a satisfactory end to their activities.”

Hoxley said, “We will divulge that and provide you with all other pertinent data if you consent to undertake the commission.   Time is of the essence. Mr. O’Hearn will be departing this afternoon to return to his duties at the mine. If you decline, I will be forced to seek another suitable candidate, no small task on short notice as I am sure you realize.”

Accept the lucrative assignment or turn it down? Plainly he was the man Hoxley preferred, the best man for such daunting undercover work. And as always his blood simmered at the prospect of a new and adventurous test of his skills. He chafed at the thought of postponing the wedding, of disappointing Sabina, of spending as many as four weeks away from her, yet it might not come to that; he might well complete the assignment quickly enough to keep the delay to a minimum. After all, confound it, business was business. They were not in the detective game for their health . . .

And hoped he wouldn’t regret it. 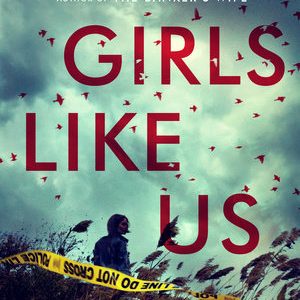 Girls Like Us Lee drives and I stare out the window. We cross the Ponquogue Bridge and make our way through Hampton Bays. It hasn’t changed...
© LitHub
Back to top