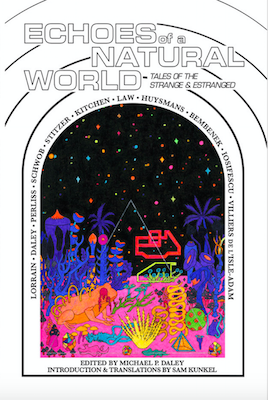 The following is an exclusive excerpt from Jean Lorrain's newly translated short story "The Toad," from the collection Echoes of a Natural World: Tales of the Strange & Estranged, edited by Michael P. Daley. The story is translated by Sam Kunkel.

It was one of my most horrible childhood memories, and has remained one of my most tenacious impressions. Twenty-five years have elapsed since those summer school-boy holidays and that misadventure, and yet I am still unable to evoke that time without feeling my heart constrict within my chest and claw its way up to my lips in an unnameable nausea of fright and disgust.

I must have been ten years old, and was still in primary school far away from the small town where I was born, in one of the most prestigious écoles of Paris. I was to spend the two months of summer holidays before me at the estate of one of my uncles, a large domain enshrouded in deep shadows with slow, calm waters that stretched out at the foot of a beech grove, sliding down the flank of a hillside. It was a charming little landscape, with an even more charming name: Valmont. Valmont, whose two romanesque syllables I was destined to find in the most infamous, cruelest, and most dangerous book of the XVIIIth century; Valmont, whose sweet and melancholic memories of those tall trees, spring water, and long and silent strolls along those covered pathways have become jumbled in my mind with the chromolithographs of Scottish lakes bordered by forests and Bavarian chateaux towering over valleys produced by Tony Johannot, and the faint melodies played on my mother’s piano that linger on from twenty years ago.

My Uncle Jacques was the owner of a vast estate tucked away in this little bit of forgotten countryside; it was once the site of an abbey, and we had taken up residence in the convent, which had since been converted into a country house. The monastic cells had become narrow, tidy bedrooms; the refectory had become the dining room, and the parlor the living room. We lived there as a family, fifteen or so cousins—both boys and girls—under the watchful gaze of our parents, and every day for those two months, various expeditions were organized to keep our little brood happy.

While these outings were a source of great excitement for my cousins, causing them to clap their hands and jump for joy, I did everything within my power to abstain, for even at that young of an age, I was already quite fond of solitude and reverie and full of an instinctive fear of both the noisy games played by the boys, and the coquettish teasing of the girls. To their exploratory parties, their picnics on the grass, and their crayfish hunts—full of amusing surprises though they were—I much preferred an adventurous walk, in solitude, by myself, among the vast grounds where the interminable fields seemed mysterious and bathed in a dreamy light that spilled through the clumps of poplars, beeches, and birches, creating curtains of golden aspens that fell thickly upon the edge of the water. Oh how I loved those endlessly quivering leaves; how they held my heart in a tight grasp. A small pavilion with colored windows tucked away amongst the willows called to me where I was, along the banks of that calm water. And so it was that I spent many long hours drifting, stretched out on my back, my arms folded behind my head and my eyes lazily following the procession of clouds in the bright and deep sky of that water country.

Oh! That soft, sleepy torpor, and the silence blooming with the sweet singing of insects during those hot July days in that far corner of the estate, with all of the hosts having retired to their cool chambers and only, from time to time, the monotone note of a rake scraping along the sand of the pathways, and, at the first sign of the autumn rust, the leaves would fall from the plane trees, like amber, liquid and yellow, upon the pewter of the ponds. Oh how distant and yet present all of that seems to me now, and, oh, that I could turn that yesterday into my tomorrow.

The heavy hours of the summertime siesta, the autumn excursions, I spent them on sly peregrinations, veritable voyages of discovery throughout the unexplored areas of that property, which never ceased to fascinate me. Long stops to admire ant-hills, delighted contemplations of immobile frogs basking on the leaves of water lilies, cautious inspections of beehives, all of these things, in short, in which children delight when studying fauna—who are themselves totally unaware of being observed! And then, one day, it was with a strange sensuousness, given my age, that I gave into my fascination with the water. The water by which I had always been attracted, seduced, ensnared, charmed, and which continues to bewitch me to this day, and God knows that I had more than a healthy dose of it on that domain, with its tiny islands, rustic bridges, and small lakes, which was reminiscent of the Keepsake—the first English garden of the country, from when the novels of Rousseau were most popular. An indolent river fed those regal marvels, itself fed by four or five smaller streams which the first owner had proudly considered to be chapels. They were staggered across the park, like cemented and tiled swimming pools underneath a roof of slate, with four or five steps below, bathing in the green transparency of the stream’s cold water.

They were, I admit, the favorite destination of my pilgrimages; one, amongst the others, that we called The Rusty Brook, was my preferred above all the rest. Situated at the edge of the park, at the foot of a pine tree whose blue shadow coated it like moonlight; even on the hottest days of the summer, it remained deliciously cool, like a block of ice still frozen in a cabinet. Occasionally, several quicksilver bubbles would break upon the surface of the water, and, amongst the nettles, the crawling ivy, and the ferns, the stream murmured, so clear, and so slow, that its water resembled not water, but rock crystal, cooling at the bottom of a reservoir.

One of my delights (I already felt a delightful twang of guilt at the thought of forbidden transgressions) was to sneak away after lunch and to dash, breathless, across the grounds, to arrive, flushed, at my favorite stream, and there, to drink greedily the blue, icy water. That water that we rarely allowed ourselves to enjoy at the table, that water that we drank with our eyes through the condensation-coated carafes; I pushed my sleeves up past my elbows and thrust in both trembling hands, drawing up fistfuls at a time to fill my mouth with gleeful gurglings. I lapped it up with my tongue as though it were an ice-cream, and I felt a sharp and penetrating coldness descend within me, which was oddly sweet in flavor. It was a sort of sensuous frenzy that gripped me, which was tripled by the knowledge of my disobedience and by the scorn that I felt for the others who had never dared to do the same. Oh, how pleasant it was in that sanctuary, in the seemingly eternal shade and calm of those great pines, my eyes gazing, relaxed, at the green velvet of the moss!

Oh, the Rusty Brook of the old Valmont estate! I had, I believe, always loved it just as passionately, always possessed it as voluptuously, as the most beloved of mistresses, that is, until the day where, in a cruel twist of fate, I was destined to find there the most despicable of punishments.

One day when, as was my custom, I had just finished slaking my thirst with long, slow gulps of that intoxicating, cool water, as I pressed my palms against the ground (that day I had, in my gluttonous sensuality, sprawled out on my stomach to lap up the spring water like a young dog), I noticed along the tiles of the pool deck, crouched in a corner, an immobile black shape which was looking at me. Two round eyes with horribly membranous eyelids were fixed upon mine, and a flabby shape, as if it had slumped over and was being absorbed into itself; it was something blackish and soft, and the very idea of coming into contact with it infuriated me. Its inertness as well—its monstrous, sluggish, inertness—filled me with rage and horror when, through the lacy shadow of the ferns, the gelatinous brown mass stretched slowly, and two disgusting spindly webbed feet took a step towards me.

For that’s what it was: a disgusting toad, grey and bumpy. Now that he had emerged from his corner the beam- ing light of the pines fell upon his spine illuminating him in full: a milky white belly dragged between his feet, bloated and enormous, like an abscess ready to burst; he stirred, painfully, and with each labored step that the brute took forward, the repulsive weight of his hindquarters sickened me.

It was, clearly, a monstrous toad, the likes of which I have not seen since. A wizard toad, aged at least a century, half gnome, half sabbath-beast, the likes of which they speak of in legends, one of those toads who sits guard, wreathed in solid gold, over the treasures of ruins, a flower of nightshade in his left hand, surviving off of human blood.

The toad stirred, and I had drank the water where this monster lived and lazed, and I felt in my mouth, in my throat, in all of my being, the faint taste of dead flesh, the stench of fetid water and—horror of horrors—I saw that the toad, whose eyes I thought had been fixed upon me, had two burst pupils and that his eyelids were streaked with blood. He must have taken refuge in this stream, tortured and heaving, to die.

Oh, that blind toad! That agony of a mutilated beast in that clear water spreading the taste of blood!

Excerpt from Echoes of a Natural World: Tales of the Strange & Estranged (First To Knock, 2020, Edited by Michael P. Daley). 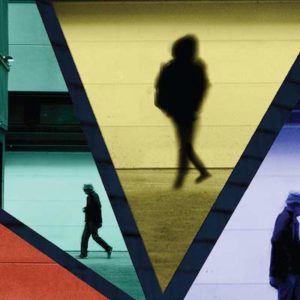 Justice for the Invisibles, by the Invisibles: A Brief History of Nontraditional Voices in Crime Fiction A few years ago I heard Irvine Welsh opine that that crime novelist Iceberg Slim “did for the pimp what Jean Genet did for the homosexual...
© LitHub
Back to top