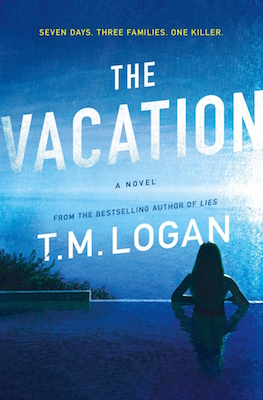 The following is an exclusive excerpt from The Vacation, by T.M. Logan. Kate and her three closest friends are about to take a trip with their families together, spending a week at a villa in the South of France. But Kate sees a text message between her husband and one of these friends, suggesting they are having an affair. She doesn't know who it is, but is determined to use the vacation to find out. But she doesn't anticipate that someone might be ready to kill to keep their secret hidden.

This is what it feels like: it’s as if you’re falling.

As if a trapdoor has opened beneath your feet and you’re falling through it. One minute everything’s fine, you’re coasting along just as you have done for years. The next minute you’re dropping, plung- ing, plummeting  into  the  dark.  You  can’t  see  the  ground,  can’t break your fall. Everything around you is falling, too. Everything you’ve built.

And this is where it starts: with a little blue numeral indicating three unread items in Messenger.

I clicked on it. At the top of the screen were new messages from someone called CoralGirl. Three new messages, just received.

—Message me later when you can x

—Need to be careful this week like we discussed

—Remember to delete messages as soon as you’ve read

I scrolled down to yesterday’s string of back-and-forth messages, reading up from the bottom. The first one was a seven-word message from Sean that stopped my heart.

Can’t stop thinking about what you said x

—I meant every word Need to talk to you again

—Does K suspect anything?

She has no idea. But I can’t go on like this

—We’ll decide when we’re in France. Figure out what to do

I need to tell her. Soon

—We talked about this. Better a secret.

I know but I feel so bad for lying to K

I couldn’t bear to read the messages but I  couldn’t stop, either, couldn’t take my eyes off the little words on the screen, each one another bomb exploding under my marriage.

I scrolled back up and read them again.

—Does K suspect anything?

She has no idea. But I can’t go on like this

Something splashed onto the phone’s screen and I realized that I was crying.

In that moment, it was as if I didn’t know my own history anymore, my own story. We’d had one life, our life together, and within a second it felt like fiction. I hadn’t even realized I was playing a role. With my hand shaking, I clicked “View Profile” on CoralGirl’s account. A generic silhouette instead of a picture. Lives in London.

Female. That was it.

I hastily marked the latest messages as unread, then locked his phone and shut it back in the drawer. Sitting on an unfamiliar bed, in a strange house, in a foreign country, staring blankly at the wall in front of me.

Cold and hot. Angry and tearful and sick with betrayal. Falling backward into the dark.

A dozen questions, then a dozen more.

Why had Sean done this?

How could I have misjudged him so badly?

But the biggest question—who is she?—was already half answered, the clue right there in tiny black letters on a screen.

We’ll decide when we’re in France

One word. But as soon as I saw it, I knew immediately what it meant. Because this week was about the four of us: Rowan, Jennifer, Izzy, and me.

Which meant my husband, my soul mate, my rock, was having an affair with one of my three oldest and dearest friends.

From THE VACATION by T.M. Logan. Copyright © 2020 by the author and reprinted by permission of St. Martin’s Publishing Group.

On Class, Capitalism and Urban Planning in Who Framed Roger Rabbit

Counting Down the Greatest Crime Films of All-Time: # 4 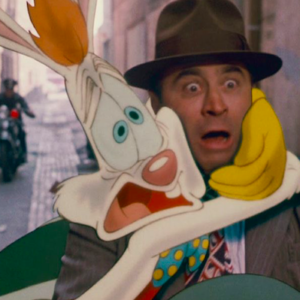