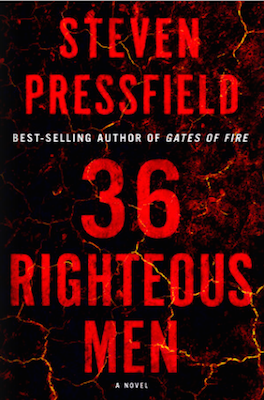 The following is an exclusive excerpt from 36 Righteous Men, by Steven Pressfield. Two New York City investigators are brought in to investigate a string of murders throughout the city, and soon they arrest a woman—a discredited rabbinical scholar—running from the crime scene. But from her, they learn about the Jewish Legend of the 36 Righteous Men, who are tasked with guarding humanity. And not only are they real, but they are also being targeted.

The term Acela Corridor refers to the run of states, cities, and municipalities between Boston and Washington, D.C., that lie along the route of the high-speed train service, the Amtrak Acela. The term is often employed in the demographic sense as well, as in, “Presidential candidate X can count on votes in the Northeast suburbs and along the Acela Corridor.”

The Acela used to be a decent train. I remember riding it as a kid. It hit 150 per and was operated by its crews with care and pride.

“Christ Almighty!” says Manning now as a bottle bomb explodes against the armor grille outside our window. The flash of the gasoline wicking off barely makes a dent in the steel-slat deflector, but the gel charge leaves a gooey yellow mess across the armorglass. It splats like a thrown egg.

We’re not even to Baltimore and the train has already been fléchetted and firebombed four times. The army should clean out these nests of squatters and the dispossessed.

Manning is reading the third of the seven files I have prepared for him this a.m. I’ve been up since two-thirty working on this. Manning refuses to read reports off any kind of screen. He insists on paper. He sits across from me now in the facing seat. I’m riding backward. Two businessmen commuters, buried in their (paper) copies of the Times and the WSJ, fill out our four-seat packet.

My notes are in typescript, following the form that Manning insists upon.

Michael Justman, Ph.D., is the victim whose murder Manning and I are being sent now to investigate.

“What was the last project Justman was working on?” Manning asks me now. “What the hell does a deputy assistant undersecretary do anyway?”

I tell him I haven’t been able to get a definitive answer to either question. No one in the State Department will go on record, except to say that Justman’s last assignment was classified. His most recent overseas trip on official business, according to the Washington Post, was to Tbilisi, Georgia, with additional stops in Ingushetia and Azerbaijan.

Manning absorbs this. “Victim Number One . . . Davis . . . was involved in what? The oil pipeline from—”

Nathan Davis is the first homicide victim in this file jacket, murdered in Manhattan nine days ago, killer’s MO identical to the Michael Justman homicide.

Manning’s military service was as an infantry sergeant, E-5/0311, in Operation Iraqi Freedom, 2004–5. He served with 3/7 [Third Battalion, Seventh Marine Regiment] in Fallujah and Ramadi. His methodology for police work mirrors the Marine Corps’ protocol for operational orders, meaning that at the top of the page, above “objective,” comes “commander’s intent.”

IDENTIFY ALL CDs BETWEEN VICTIMS 1 AND 2

His intent is different—and of a superior order:

ESTABLISH A MOTIVE. WHY WOULD KILLER SPECIFICALLY SELECT VICTIM 1 AND VICTIM 2?

CD means common denominator. In Manning’s lexicon this connotes not just social, political, or religious links but any association, however remote, that could conceivably tie the two men together. “Did they know each other in college, the army, postgrad? Did they compete in sports? Did they sleep with the same woman (or man)? Were they sued by the same litigant? Did their wives know each other? Did their goldfish know each other? Are they brothers, for Christ’s sake?”

There are old-school detectives, and then there is Manning. He’s a troglodyte, a Neanderthal. I know next to nothing about his personal history, other than the fact that he came out of a twelve-month leave of absence following a family tragedy two weeks before I was assigned to work with him.

Rival officers regularly attempt to engage me in behind-Manning’s-back rat-fuck convos on this subject. I shut them down. I don’t want to know Manning’s past. I accept his moods. I live with his irascibility. He’s Old Corps. Serving under a salt like Manning is the ideal way to be trained, even if you yourself don’t want to wind up as that kind of cop or that kind of person.

Manning’s standards are levels loftier than those of any other detective in DivSix. My job is by far the hardest of any junior detective. But every task Manning assigns me contains an element of instruction.

Manning instructs by means of mantras. His first is, “Never discount the obvious.” Manning believes that clues and evidentiary breakthroughs hide in plain sight. Look for what’s staring you in the face. The obvious things are the ones you miss.

Manning almost never talks to me, or to anyone else for that matter. The closest he comes to conversation is thinking out loud. My job is to listen. Entering the scene of the Davis murder nine days ago—a private dining room at the Century Association on 43rd between Fifth and Sixth—I hear him mutter to himself, “What would the dumbest sonofabitch in the world think in this situation?”

Cadets at the academy are taught to be wary of assumption. Manning takes this two levels further. Flawed investigations, he says, are almost always “towers of speculation built upon foundations of assumptions.”

“When you enter a crime scene or begin an interrogation, you arrive with assumptions. You assume a suspect with needle tracks up and down his arm is a junkie or that the guy holding a smoking nine-millimeter is the killer. Stop thinking like that. Flush that shit out of your brain.”

An investigator’s responsibility before anything else, Manning believes, is to achieve and maintain awareness of his own unconscious assumptions—and to banish these from his thinking. “A little kid sees clearly because she is unburdened by assumptions. ‘The emperor has no clothes.’ ”

We’re approaching the new Baltimore Harbor Tunnel. The largest and most desperate homeless encampment on the East Coast squats here, almost three hundred thousand souls displaced by the rising water and funneled into camps above the rebuilt seawall. The train slows nearing the tunnel entrance, not so much for attacks, as the police and army have routed most of that, but for suicides, even mass suicides, of people hurling themselves in the dark onto the tracks.

Our businessmen seatmates come alert as the train decelerates. But we’re good today. Other than a broadside of obscene signs and graffiti, we pass through without incident.

Thirty-six minutes outside of D.C., Manning excuses himself and makes his way to the men’s room. When he steps over the legs of Businessman #1 and into the aisle, I note in his jacket pocket the Imitrex STATdose kit. It’s gone when he returns, so I know he has used and discarded the injector.

The only time Manning speaks on the whole trip other than giving me my instructions is when he gets on the phone to the Georgetown PD supervisor whose jurisdiction we are encroaching upon as part of a TJTF, Temporary Joint Task Force. Manning thanks the officer in advance [Detective Sergeant Stellabotte, Rubirosa A. “Ruby”] for letting us work the room, i.e., the crime scene, and for permitting us to employ our proprietary DCSR, Digital Crime Scene Reconstruction, technology. We have brought from New York (actually summoned from his family vacation in Rehoboth Beach, Delaware) our own forensic reconstruction expert, Dr. Jesse A. Uribe.

Before Manning and I boarded the train two hours ago he had me forward to Detective Stellabotte all our files and background about the first New York murder victim, Nathan Davis, and the two others in Russia who share the same profile (about whom we have tantalizing but so far incomplete parallels.)

From Baltimore south, I work this angle on my phone and my laptop.

Manning has a migraine. I can tell his level of pain by what it does to his eyes. He hides them now behind dark glasses, turning his face toward the bulkhead and feigning a snooze. He’s in agony, I know.

Counting Down the Greatest Crime Films of All-Time: #36 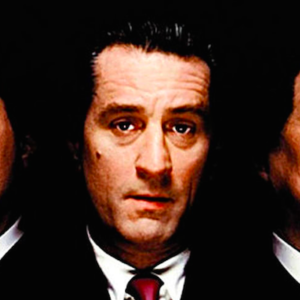