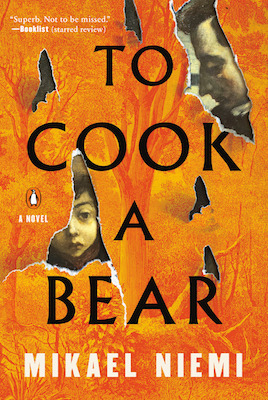 The following is an exclusive excerpt from To Cook a Bear, by Mikael Niemi. When runaway Jussi is adopted by botanist-philosopher Laestadius, life becomes peaceful again. But when a maid goes missing and is later found dead, authorities declare that a bear might be on a rampage. But Laestadius knows that there are worse creatures lurking in the forest.

One evening the pastor and i were in his study, pressing our latest finds. We had discovered them in a marsh not far from Kengis. Some insignificant stalks of sedge in particular had caused the pastor to quiver like a gun dog. With great care I carried the specimens home in his vasculum, the roots gently laid bare and wrapped in a soft cloth, and now I was helping him exchange the damp gray paper for dry, in order to best preserve the plants. To- gether we tightened the plant press, pulling the cord until it creaked and then securing it with the wooden pins.

We were interrupted by the sound of the front door opening and a stranger’s voice asking for the pastor. This was immediately fol- lowed by a knock and the pastor’s daughter Selma peeping in through the crack in the door.

The pastor wiped his hands on a rag and gathered up the wad of tobacco I had just cut for him from the twist.

At the same moment the study door was thrown wide open and a rawboned youth barged in. There was something disturbing about him, a preoccupied look in his eye, something uneasy. The man was afraid.

“Reverend,” he stammered in Finnish, “the reverend must come.”

The pastor looked calmly at the visitor. His expression betrayed no displeasure at being disturbed. Yet I knew that he jealously guarded his time in this writing chamber. The man was standing there with sweat dripping from the end of his nose, his shirt soaked as if he had been running for hours. His arms were flailing in an ef- fort to stress the urgency, as though he were striking at something.

“Who are you talking about?”

I looked up when I heard the name. I knew the woman. She had been hired on one of the farms nearby, and I had often seen her in church with the rest of the servants. She was a pale, chubby girl with an upturned nose, a little slow in her movements. She always held a handkerchief in her hand, in the manner of an old lady. Whenever her spirit was moved, she used it to dry her eyes and nose.

The pastor gave me a look. The hour was already late and we were both tired after a long day’s trekking. But it was summer, and some light would remain throughout the night. The youth detected our hesitation and stamped his feet, giving the impression that he wanted to grab hold of the pastor and forcibly drag him away.

“We’re coming,” the pastor said. “Jussi, will you give him some- thing to drink?”

I hurried out into the cabin and handed a ladle of water to our sweat-drenched visitor, who drank it like a horse.

It was the early hours when we reached their farm. The man who had come to fetch us was called Albin and was the eldest son of the house. All the way there, he ran thirty meters ahead of us, stopped to wait for us to catch up, then ran on again. The pastor and I kept an even, steady pace, accustomed as we were to journeying on foot. Everyone inside the farmhouse must have been watching through the window, for as we drew near they rushed out to meet us. There was the master, his wife, and behind them a swarm of sleepy children with tousled hair. The master and his son didn’t pause to offer us anything, but started at once down a path into the forest, where we followed. The sun was nearing the horizon in the north, as we struggled through the tangled undergrowth. The master was called Heikki Alalehto, and in confused and incoherent bursts he told us how the maid Hilda had gone out into the woods with the cows as normal that morning, but hadn’t returned for evening milking. Most of the herd had plodded back to the farmyard by themselves, but there was no sign of the maid.

“Perhaps the girl has gone looking for a missing cow?” the pastor suggested.

Heikki agreed that it was a possibility. But she had never been away so long before.

Every now and then they shouted her name. The echo of their voices rebounded off a distant ridge. The pastor and I walked in si- lence; I saw his eye rest on a Gramineae that appeared to be unfamil- iar to him and I noticed how he hastily picked the sample and placed it in his knapsack.

Deep into the forest, we came across a place where someone had set up a modest camp. A few sticks remained in a burned-out fire.

“She usually takes a rest here.”

Heikki was just about to trample down the campfire when the pastor took hold of his arm. For several moments he stood without speaking, studying the scene. His gaze moved from the firepit to the broken spruce twigs she had been sitting on. A small milk pail lay overturned; its lid had come off and milk had splashed onto the moss, so white it seemed luminescent. The pastor inclined his head to mine.

“Well, that . . . Hilda had been sitting here, having a rest. She made a fire. And then she knocked over the milk canister.”

“Use your eyes. Tell me what happened, Jussi.”

He spoke in an undertone, but his voice was filled with intensity. With an impatient hand he brushed away the hank of hair con- stantly falling in front of his eyes. I made an effort to register every detail, trying hard to summon up the girl’s image.

“Hilda was sitting by the fire having a rest. It would have been in the middle of the day, when the sun was at its highest. That’s when a person usually feels hungry. But all of a sudden something hap- pens that makes her run away. Although . . . for all I know she doesn’t run, but she does, I think. That’s what it seems like. And then maybe . . . maybe she gets lost. Can’t find her way back. That’s what might have happened. At least, I think so.”

“Proceed only on the basis of what you can see,” the master said, pinching his lower lip with his thumb and index finger. “Stick to the facts. What do we have before us?”

I realized he was disappointed in me. I spent several moments struggling to deduce more from the scene.

“Her headscarf is still hanging on a bush. So she didn’t have time to take it when she ran away. And therefore she must have been in a hurry.”

Heikki was shifting impatiently from one foot to the other, noticeably on edge. He wanted us to stop talking and start searching, but the pastor was determined we should wait. He half closed his eyes, squinting in a strange kind of way.

“Her headscarf is hanging on the bush to dry,” he said. “In which case it must have been midday and warm enough to make her per- spire. Despite the temperature, she lit a fire so the smoke would disperse the mosquitoes. The fire was still burning when she ran off, but it’s out now. We can see that the wood in the middle has burned down and a dusting of ash has blown in an easterly direction over the lingonberry twigs. There isn’t a breath of air at the moment, but it was blowing in an easterly direction this afternoon. Hence it must be several hours since she disappeared. Was she alone?”

“If there had been someone with her, she would have been wear- ing her headscarf, as befitting the respectable girl she was.”

“That’s possible. At any rate, she was sitting here eating a piece of bread when something happened. The milk canister was tipped over and she dropped the bread on the moss.”

The pastor pointed to the snag of a pine tree standing right next to us.

“Do you see what’s on the branch? Thin white flakes. It’s milk that’s dried. Some little birds must have been hopping around in the milk and kept returning to the branch. Something edible, probably a piece of bread, must have ended up in the spilled milk.”

“Of course!” I exclaimed, impressed.

“So the girl rushes away. You can see footprints in the moss.

Strides the length of someone who’s running.”

Only now did I notice the scarcely visible indentations he was indicating.

“Good, Jussi. From someone larger than her. And heavier. You can see the prints are pressed deeper.”

Heikki, who had been standing there listening to us, suddenly let out a groan. Before the pastor could stop him he ran over to the trunk of a pine tree and pointed. There was evidence of fresh dam- age to the bark. Heikki ran his fingers over the deep gouges.

The pastor examined the claw marks with care.

“We have to muster people for a search party,” he said. “Some- body needs to tell Sheriff Brahe. I’m afraid something’s happened to the poor girl.”

Heikki nodded, plainly scared and glancing around nervously in the summer night. He began running back down the path toward the farm, while the pastor remained where he was. I saw the master care- fully lift the milk pail and inspect it from all angles. He put his finger in the spilled milk, swirled it gently round and spread it out, and then picked up something long and almost invisible. I realized it was a hair. He cleaned it, wrapped it in a piece of cloth, and put it in his pocket. With the same care, he investigated her knapsack, which was still laced up, propped against a tussock. Without comment he stud- ied the claw marks on the tree one more time. We began to follow the footprints, our eyes peeled. I saw the pastor bend to pick something up before we continued. The impressions were visible for about fifty steps, until the ground rose and became harder. There the tracks were more difficult to follow, and we soon lost them completely.

With mounting concern, we started back toward Heikki’s farm. I shouted Hilda’s name and looked around uneasily. The thick mass of willow branches suddenly seemed threatening. Anything large could hide in there and at any moment it might charge out and sink its jaws into the tendons of my neck. His lips moving, the pastor appeared to be talking to himself, or perhaps to higher powers. For my part, I gathered up a heavy branch to swing in the air. At regular intervals I smashed it against the tree trunks as we passed and heard the dull thuds recede into the misty veils of the summer night.

The Literature of Children Who Raise Themselves and Demand Justice 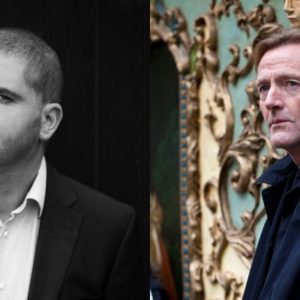