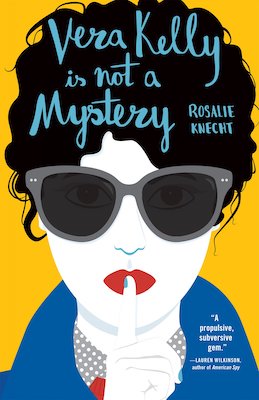 The following is an exclusive excerpt from Vera Kelly is Not a Mystery, by Rosalie Knecht. Vera Kelly, the ex-CIA spy is back in this new novel, but this time she's without a job or a girlfriend, so she becomes a private detective.

The morning after Jane left me, I woke in a Russian diner that overlooked the boardwalk at Brighton Beach, sitting upright in the corner of a booth. I had always been grateful for an all-night restaurant. A waitress with red cheeks was refilling the cup of coffee in front of me and rotating the plate with its scraps of corned beef, clearing her throat politely. I sat up and thanked her. Through the fogged glass I could see the gray ocean, pale and soft, meeting a paler sky. Down the beach, the Wonder Wheel at Coney Island was coming out of the predawn dark. I put my hand over the mug and the waitress moved away.

By my watch, it was 6:40 in the morning, which meant that it was almost twenty-four hours now since things had begun to go wrong. Jane had said, “I’m tired of waiting for you to want me here.” She was standing in the hallway between my bedroom and the second-floor bathroom, holding the powder-pink bag with her makeup and toothbrush in it, wearing my dressing gown. “I don’t have to move in. But you hardly talk to me.”

“About what? About nothing. I turn around and you’ve left the room.”

“You say clever things, and when I try to answer you seriously, you make clever jokes.”

“You know I can’t. You would make me miserable.” She waved her hand toward the hall, the stairs. “You practically faint when I leave my shoes on the rug.” She brushed past me to my room. I leaned in the doorway and watched her getting dressed. My eyes were stinging, my nose was stinging. I sneezed. “I have a class to teach,” she said. “I’ll get the rest of my things later.”

She put her hand on my shoulder. “You’re a nice girl, Vera,” she said. “But you’re impossible.”

Jane was noisy and hot, with a bright face; after she left, the house felt like a meat locker, despite the August weather. I went for a long, blurry walk. When I got home, I stood in the kitchen for fifteen minutes, looking at the wall clock, and then had a whiskey and sat in the garden. The roses were blooming for the second time that year. They were yellow washed with pink, like sherbet melting in a bowl of punch. The starling who lived under the eaves of the shed came out to scream at me. He thought the yard was his. It was ten o’clock in the morning. It was time to go to work.

I was one of the film editors for the news broadcast at the WKNY station near the Battery. I started leaking tears on the Q train over the river, because the view was too big and I could see the trees on Governors Island, fizzing and dark in the sun. The summer would be over soon.

I made it to my break before I called her. She had a telephone in her office at Brooklyn College, and she would have just finished her afternoon Romantic poetry class. It rang twice and she picked up.

Later, I wondered if he had been listening to my calls for months, ever since he had cornered me at the bar where the editors and runners went after the evening broadcast and I had pushed him off, laughing.

“What do you mean?” I was alone in the editing room, and I was keeping my voice low. George Kepler must have been listening from the switchboard, or patched in from another office. Later, I wondered if he had been listening to my calls for months, ever since he had cornered me at the bar where the editors and runners went after the evening broadcast and I had pushed him off, laughing.

I hung up and tried not to fall apart. My eyes were rattling in my head. I went to the stairwell and smoked a cigarette, and then another. I returned to the editing room. My supervisor, Mr. Anderson, was there, standing with George Kepler, who looked very pleased.

“Vera, I need to speak with you,” Mr. Anderson said, and turned to indicate his office with a sweep of his hand, as if we were going to the theater together.

“What for?” I said. George Kepler turned and walked away.

The hairs on the back of my neck were standing up. “Privately,” he said.

He shut the door behind us and pointed to a chair. His windows looked out on a post office lot, with a huge doorway to an underground garage where fleets of mail trucks came and went in the gloom. Sunlight never touched the street in this part of town.

“There’s a character clause in your employment contract,” he said. He looked at me as if I should grasp his meaning, and then I did. A mask descended. I tried to keep my voice calm.

“No, you don’t,” he said. “You’re in violation of your employment contract. We can’t keep people on staff who live that way.” He pushed back from his desk and began searching in his coat pocket for his matches. His color was rising and he wouldn’t look at me. “I told them you would be a problem,” he said, “when they first promoted you from the floor. It was obvious to anyone with eyes. They didn’t listen to me.” He found the matches. “We’ll mail you your last paycheck.”

“You’ll take his word?” I said. “George Kepler is the worst editor you have. He takes twice as long as the rest of us.”

“You’re wasting my time,” he said.

There were two more editors at their desks when I came back to get my things. George was standing at the side of the room, watching one of the monitors, but he looked over and I stared until he turned away. I packed everything into my purse and a shopping bag I found in the lounge. I had never kept much at my desk anyway. There was a tense silence while I sifted through my papers. The youngest editor, a sweet boy named Carl, was concerned. “Going somewhere?” he said.

“Nice to know you, Carl,” I said. It had been. He looked surprised.

And then I was back out on the street again. The awful thing was that it was a beautiful day, one of those slow, rich August afternoons when the light hit the Battery like the inside of a cathedral. I walked slowly, having nowhere I wanted to be, now or for the foreseeable future. A man at a hot dog cart was having an argument with a seagull, which was hopping away with half a pretzel. Two children were racing each other to the railing overlooking the water. The leaves in a stand of little birches were all alight and shivering. I had a pain in my chest, as if I had swallowed too much air. I walked as far as the Staten Island Ferry Terminal and sat on a bench for a long time, doing nothing at all and not seeing much, until it occurred to me that I could smoke. That was something to do. I smoked three or four cigarettes. The six o’clock ferry was leaving, and I got on and went to Staten Island and back, just to feel the sea wind  in my hair. I stood at the railing with a crowd of happy visitors taking pictures of the Statue of Liberty and tried to think what to do with myself.

Darkness fell, but made it no easier to imagine going home. I loved my house. I had bought it with cash, all the money from the Argentina job, and I had spent months buying secondhand furniture and painting the windows and trim, learning everything it needed. I couldn’t stand the thought of contaminating it with myself, in the state I was in.

Instead I went to the Bracken, my old haunt in the Village. Maxine the bartender was there, making four drinks at once to show off. “Haven’t seen you in a while,” she said. It was early and the piano player wasn’t in yet.

“I was shacked up for a little while,” I said.

“That’s the trouble,” Max said. “Happy girls don’t go to bars.” She distributed the drinks at the other end of the bar and then came back and made me a gimlet. She had done her mascara in the new way, with the lower lashes so heavy and dark that she looked like a sleepy doll. I told her I liked it, and she turned so she could wink over her shoulder. Max always flirted with me.

“I got fired,” I said, experimentally. It had been a year since I stopped my old line of work, but it was still a habit to be closemouthed.

“Oh, Vera, darling.”The eyes went round. She squeezed my forearm. She didn’t ask what for, and I didn’t tell her.

When the place started to fill up, I left. It was lack of imagination that put me on the B train at West Fourth Street, the train that would take me home, and cowardice that kept me on it, sliding past my own grimy platform, down to Brighton Beach.

From Vera Kelly is Not a Mystery. Reprinted with permission of Tin House. Copyright © 2020 Rosalie Knecht.

Writers Under Lockdown: Surviving (and Writing) During a Pandemic 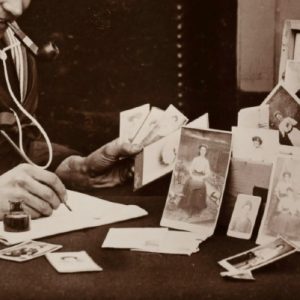 Writers Under Lockdown: Surviving (and Writing) During a Pandemic Writing is never easy, not even under the most ideal circumstances. It’s even harder during a virus-driven lockdown, no matter...
© LitHub
Back to top