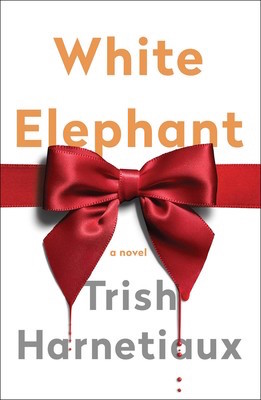 The following is an exclusive excerpt from White Elephant, by Trish Harnetiaux. Henry and Claudine Calhoun are a real-estate power couple, whose fancy office holiday party becomes the site of treacherous blackmail when someone wraps up a statue that Henry and Claudine used as a murder weapon long ago, and adds it to the pile during the celebration’s gift-giving exchange game. But who among their employees knows about their past? And why begin intimidating them now?

Tapping the side of a champagne flute with a cocktail fork to rouse the attention of a room brought Claudine immense pleasure. She was an expert. Knowing where to place her fingers on the glass, the exact part of the flute to strike, the right amount of champagne necessary to achieve the desired pitch, the right part of the fork to create the perfect ring. Strong and clear. The note sharp enough that everyone stopped talking and turned to find her.

“It’s White Elephant time. Fill up your drinks and please find a seat. There are a variety of savory bites and hope you brought your sweet tooth. There will be macaroons, mousse pots, classic candy canes. And much more.”

After a brief rush to the bar, anticipatory chatter at full blast, the guests made their way into the living room. Welcomed by the smoky scent of burning apple wood in the air. The Tigglemans practically trotting. The last time they moved that fast was to find the heat lamps at the Aspen World Snow Polo Championship. They might be old, but they were enthusiastic White Elephant novices.

The room was inviting. Two long leather couches, three deep navy armchairs with foot stools, the white chair by the fire, and two mid-century benches. They were arranged in a wide semicircle so guests could enjoy the fire as well as watch the snow fall through the windows. A smattering of small side tables and chic wooden coffee tables for drinks. A white shag carpet in the center. Steve was talking close with John, Rashida, and Jules, then they were all laughing at something he was saying. It was unacceptable that they would even speak to him, let alone encourage him with laughter. He wasn’t even funny. The suggested intimacy made her think one of them invited him. No. She wouldn’t be distracted in this way. Watching him play the flitty guest, buzzing his way around her party. Apart from Steve, things were as they should be. The conversations light, the guests tipsy, a good moment to start the main event.

“I’ve saved you the best seat,” she said, leading Zara to the white corduroy wingback near the fire. The chair was wide enough for Pip to curl up next to her.

“Great,” said Zara, the blush from her champagne showing in her cheeks. Claudine gave the piano player a nod and he began playing “Baby, It’s Cold Outside.” Claudine had chosen each song personally, looking to tap into the very special holiday spirit. Involuntarily Zara began to hum along. This was almost too easy. Everyone took seats.

Of course Jules conveniently saved a place next to her for Henry. Fine. Claudine was about to take the seat on the bench next to Zara, when Steve jumped on it. He was becoming more impossible by the minute.

“Darling, we’re starting,” she called across the room to Henry. He stood and came dutifully by her side.

“As tradition dictates,” Claudine explained, “we’ll begin by reading the poem. Some people have taken to calling this game Yankee Swap. That would indicate it has origins in America. However, the pastime can be traced all the way back to this translated Danish poem from 1857 where it was referred to as a White Elephant. It pre-dates even Aspen.”

This was a complete lie. Claudine had written the poem herself. But as Steve had taught her, people wanted to believe, and the details were what mattered.

She took the old, yellowed envelope from the mantel, opened the flap with great care, slid out the card, and read:

Say now, young friend, it’s holiday time! With snow and gifts and cheese and wine. The night you wait for with all your heart

When at last the White Elephant game will start.

What awaits you wrapped tightly in ribbons and bows? Mystery, excitement, and likely some woes.

The game is designed to expose your true nature It is not for those afraid of a little danger.

Go forth, be bold, take the gift that speaks to you Even steal from your neighbor if you want to.

Be nasty, not nice, take what you like best

Now is the time to put your treachery to the test.

The ritual over, Henry returned to his seat and from the mantel Claudine took the Tiffany rock-cut bowl containing the numbers Jules had so delicately written. Of course she’d re- moved her own to secure her spot, and the one for Zara was ex- pertly palmed in one hand. She began pacing in front of the fire.

“There are fifteen of us tonight,” she said. “Sixteen,” corrected Steve.

“Every piece of paper in here,” she ignored him, holding up the bowl like an offering, “holds a key to the game. Your key. Each has a number. The choosing will be random. Stay where you are; I’ll come to you. Remember, this is the only time in your life that you don’t want to be number one. It leaves you open for the first steal.”

“How many times can you steal?” asked Zara. “Once per round.”

“Is that right?” asked Rashida. “I feel like we debate this every year.”

“And every year it’s the same answer,” said Claudine. “For example, if Rashida steals a gift from Alice, Alice can’t just steal it back. She must choose from the table. Your number is your number. No switching, no peaking, no cheating. We’ll go in order. Select a gift from the table, bring it back, and open it in front of the group. Let the games begin.”

Claudine did as she said, stopping before each guest with the bowl. Holding eye contact with them as they dipped their hand in, making the selection. It was another moment she liked. The locked gaze. Like the poem, it brought some extra drama. Raised the stakes and made everyone feel they were part of something important. Which, of course, they were.

When she reached Steve her eyes went cold. His twinkled as he picked his number. He’d never been able to hide his motives, whether it was a grope in bed or, like now, challenging her openly without saying a word. Telling her not to feel safe. He’d come for a reason and she’d better be on guard. There wasn’t a chance she’d react to his silent threats, and she moved on as quickly as she could.

By the time she reached Zara, she slyly let the slip of paper that had been cupped in her palm slide down into the bowl, careful no one saw. She wasn’t quite as stealthy as she thought and Zara caught it, giving her a quizzical look. But Claudine could tell she approved.

“Your turn.” Claudine smiled. Zara opened it to find the best number of all. The coveted finale, sixteen. She’d have her pick of the lot. The empty bowl went back on the mantel and Claudine gave Steve a look that said, scoot over. He obliged and made room for her on the bench. She took her seat next to Zara. Annoyingly, Pip gave a small growl. Making peace with the beast was a necessary move. She leaned down to its ugly little face until they were nose to nose and whispered just loud enough for Zara to hear, “Pip-kins, you ready for the game?”

“Wait!” said Zara. Whipping out her phone, she expertly positioned herself in frame as she propped Pip under one arm. The fire blazed behind them. “Quick selfie.”

“What’s your handle?” she asked.

“At Calhoun and Calhoun,” Claudine and Louisa said at the same time.

“Oh,” said Zara. “I have zero service.” “That’s not usually the case,” said Claudine. “It must be the weather,” added Jules.

“That’s okay,” said Zara. “I shouldn’t have even tried. I love how no one’s on their phones in Aspen. So present!”

Not a setback; Claudine was confident she could get Zara to post later. For the moment she’d take pride in knowing collect- ing the phones set the right tone. And, now, it was time to start. “Who’s the sorry soul that’s been blessed with number one?” 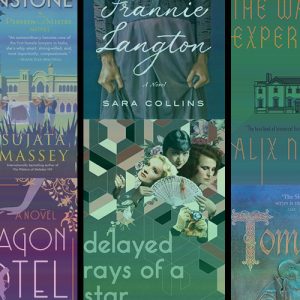 The Best Books of 2019: Historical Fiction Historical fiction may just be the broadest category of crime writing—after all, any novel set beyond living memory that...
© LitHub
Back to top