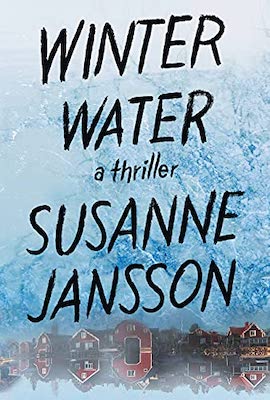 The following is an exclusive excerpt from Winter Water, by Susanne Jansson. When Martin moves his family an island on the coast of Sweden to cultivate a mussel farm, he doesn't expect tragedy will follow. One January morning, he runs to answer the phone, and when he returns to the shore, cannot find his young son. Though a body is never found, the boy's disappearance is ruled an accidental drowning. But former police photographer Maya Linde thinks the truth is not so simple.

A pale sun was shining outside, and Martin hadn’t bothered to clean up the breakfast dishes. Instead they’d gotten dressed and gone out to the yard. It was nearing noon now, and they had been out for two hours. Martin had cleared the tools they never used from the shed, raked the frostbitten, half-rotted leaves from the lawn and the garden beds, and shored up a collapsing wall of the compost bin.

A thick, evenly white layer of clouds covered the sky. “Are you hungry?” he asked Adam, who was at the play

“Are you sure you don’t want something besides soup?”

“I don’t think we have any buns, but I can make sandwiches,” said Martin. “And hot chocolate. Then we can have a picnic down by the water.”

“Yeahhh, a picnic!” Adam said, his face breaking into a huge smile.

“No, you know you can’t—it’s too slippery in the winter. We’ve talked about that.”

Adam had learned to ride his tricycle just before the first snowfall and was having trouble accepting that it had been put away until spring.

“No, I think we’ll leave Mulle at home. So he doesn’t get wet—you know how the waves splash. And we need someone here at home who can watch the house while we’re gone.”

It wasn’t long before they were ready to go. Martin had packed a basket with coffee, hot chocolate, chicken-salad sandwiches, and two bananas; Adam was carrying his red plastic bucket.

Martin pictured how he would sit on the bench and watch Adam collect rocks, as he always did. Adam had an impressive collection by now, and he kept it in an old metal box under his bed. His very “bestest” rocks were kept in a small crystal bowl of water in the TV room. It was a stand-in for the aquarium Martin had promised Adam could get when he was a little older. Instead of a dog, Martin hoped, but of course he never said so aloud.

As they were walking out the door, the phone rang. Hardly anyone ever called the landline anymore, only their parents or the occasional salesperson. Martin was on the verge of ignoring it but realized that if it was his mother, he could ask her to buy some chocolate pudding on the way. His parents were coming for a visit later that day, and it would save him a trip to the store.

“You play with this, and I’ll be right back,” Martin said, handing Adam an old pay-as-you-go phone that was on the shelf just inside the front door.

Adam gazed at him with his big blue eyes. Then, phone in one hand and bucket in the other, he sat on the bottom step and began to press buttons.

Martin heard his soft voice as he entered the kitchen. “One, two. Fouw, sheven… Helloooo, dragon.. .”

There was a long silence. They’d never had an easy time talking to each other.

“We’re fine. I just thought… I wanted to check… while your mother isn’t around… how’s the farm going? Are they growing like they should—the mussels, I mean? No problems?”

“We’re just heading down to . . . ” Martin glanced through the frosted glass of the front door and caught a glimpse of Adam’s green jacket on the stairs.

“You know I felt you hadn’t thought it all the way through when you quit your job to start your own farm. I told you that. Risky.”

Martin took a deep breath. He had borrowed money from his parents to get the mussel farm off the ground, but nothing had gone as planned. This criticism was coming out of the blue, and he launched into a long explanation of why the farm was having trouble, without mentioning the worst of his problems. He didn’t want to worry his parents.

“If you’re lucky, Sven will take you back. He always needs people.”

Martin closed his eyes. Just keep twisting that knife, Dad. He felt the bile rise in his throat. He was edging closer to words that would make his relationship with his father even more tense.

“Let’s worry about that another time. Adam is waiting for me. See you in a few hours. Bye.”

He hung up, then stood there, lost in thought. What was his dad trying to accomplish? He wasn’t the type to call just to chat; Mom was the one who did that. Had he heard rumors about problems at the farm? After all, his dad still had lots of contacts on the island. Martin shook off his unease and went out to the stairs, where he picked up the basket.

All of a sudden, he realized the green down jacket he’d glimpsed through the door had no Adam inside. He must have unzipped it and wriggled out. The stiff fabric was standing up on its own, propped up against the step behind it. A gust of wind made it collapse.

Martin walked around the house, calling his son’s name louder and louder. To the swing set. No Adam. To the sandbox. No Adam. He jogged over to the bushes where the hedgehogs usually hung out during the summer. No Adam there either. He glanced into the toolshed to see if the tricycle was still there; it was.

He dashed out to the road, casting long looks in either direction—no Adam—and then he wandered around among the trees for a minute, a few steps this way, a few steps that way, his calls ever more strained, his heart pounding ever faster. At last he set off for the sea. Tripping over roots, slipping, stumbling over stones. He passed the forested slope on the right and continued toward the water.

It was windy down here; the strong crash of the waves against the rocks echoed in his head.

Lightning-fast images flashed through his mind, increasingly panicked prayers that Adam’s untroubled face would pop up at any moment, there, by the dock, bent over a collection of smooth stones, or there, behind that big bush, or as soon as he rounded that boulder over there. But no matter where Martin turned, it was quiet and empty, with no Adam in sight.

Instead he suddenly saw something else, down past the big rock they’d always used as a landmark—it was safe to dive there; it was deep there. The object seemed to glow like an otherworldly fruit, something from another dimension.

Adam’s red plastic bucket was bobbing on the water. 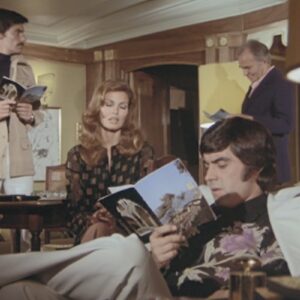 On the Murder Mystery Movie Written by Stephen Sondheim and Anthony Perkins It’s always interesting to learn about the hobbies of geniuses. The late Stephen Sondheim famously had two: the cinema...
© LitHub
Back to top