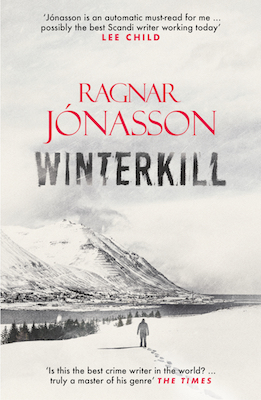 The following is an exclusive excerpt from Winterkill, by Ragnar Jonasson and translated from the French edition by David Warriner. A blizzard has struck Siglufjörður at the same time a body of a nineteen-year-old girl is found on the main street. Not only must Police Inspector Ari Thór find her killer, but he must do it in the middle of a tremendous storm that threatens to erase all trace of the murderer.

The emergency operator cut to the chase: ‘We’ve just received a call from Siglufjörður; are you the duty officer tonight?’

Night and day were much the same in Siglufjörður in summer, when the sun barely set at all. It was Ari Thór’s favourite time of year. It was just a couple of months away now, and for him, it couldn’t come soon enough. He loved the sense of infinite freedom that came with the long hours of daylight in the north of Iceland.

It was a far cry from the darkness and snow that blanketed the town in winter.

Ari Thór was wide awake when the phone rang. He couldn’t sleep, no matter how hard he tried. He was still using the master bedroom in his place on Eyrargata. The same room he had shared with Kristín and Stefnir before she and the little one moved to Sweden.

He had found it hard to adjust when he first moved there from Reykjavík, but the blizzards and gloomy days no longer brought on the same feeling of claustrophobia. He hardly ever felt homesick anymore. In recent years, Siglufjörður had experienced the ripple effects from the new wave of prosperity that was sweeping across southern Iceland in the wake of the financial crisis. Now, tourists from all over the world flocked to the small town every summer. Even in winter, people came to enjoy the local ski slopes, most of them from other places in Iceland. Easter had become an especially popular time for visitors, and now, on the eve of the long weekend, it looked like the slopes were going to be busy.

Ari Thór was in his thirties now, but he felt that his life was back at square one. He lived alone and he hardly saw his son anymore. He couldn’t imagine being able to salvage what was left of his relationship with Kristín. They had exhausted all the options, so to speak.

Truth be told, he had settled into a comfortable routine and he was reluctant to do anything that might rock the boat. He had been promoted to inspector in Siglufjörður after years of aspiring to the role, so he was now in charge at the police station. At some point, he would have to decide whether he was happy with what he had achieved. He knew that it would be hard for him to go any further if he stayed in Siglufjörður, that was if he decided to keep climbing the rungs of the career ladder. It wasn’t just that he had reached the most senior rank at the small-town police station; it was the fact that, even if he excelled in his current position, there were no higher-ups close by to see his good work.

Tómas, his old boss, had left Siglufjörður and moved south to take up a position in Reykjavík. For a while now, he had been encouraging Ari Thór to follow his example, saying Ari Thór should let Tómas know when he was ready to do the same, and he would put in a good word for him. Ari Thór wasn’t sure the offer still stood, however, as it had been a long time since Tómas had mentioned it. And he was all too aware that Tómas wasn’t getting any younger and must be close to retirement. Soon, Ari Thór would lose his only advocate at police headquarters in Reykjavík. Once that door closed, he might be stuck up north for good, whether he liked it or not. Ari Thór’s consternation about his future tended to prey on his mind in the dead of night, and now was no exception. When the sun came up, though, he always managed to clear his head, resolving to keep taking one day at a time. But he knew the clock was ticking. Soon, he would have to make up his mind. Maybe he would decide that he was right where he wanted to be, here in Siglufjörður. He still needed to give the matter some serious thought.

There would be no time to dwell on the question over the Easter weekend, however. He would be too busy doting on little Stefnir. Ari Thór’s heart was already skipping a beat at the thought of seeing him again, even though it was just for a few days. His son had turned three at Christmas, but Ari Thór had missed out on all the celebrations.

Six months earlier, Kristín had made the decision to further her medical training by going to university in Sweden. Ari Thór didn’t hold it against her. Iceland provided excellent training in general medicine, but like many doctors, she wanted to become a specialist, and the time had finally come for her to stop putting things off and pursue her ambition, and that meant studying abroad. As Kristín’s plans became clear, she and Ari Thór had discussed Stefnir’s future in light of the move. Kristín had suggested that she take the boy with her ‘in the beginning’; they could think about other options down the line. She had promised to bring Stefnir back to Iceland at Christmas and at Easter, perhaps more often, and Ari Thór had been planning to take holiday time in the summer to see them in Sweden. He hadn’t objected, despite the terrible sense of dread that filled him at the thought of seeing his son so rarely. He wanted to avoid any kind of conflict with Kristín.

Ari Thór tossed and turned in bed, trying to get comfortable. Curling up on his side, he took a deep breath and released it with a long sigh. He had to get some sleep. Tomorrow – no, today, he corrected himself – was Thursday, and his last day on duty before the long Easter weekend. Kristín and Stefnir would be arriving that evening.

It was nearly three in the morning. More than two hours since he had gone to bed, and he was still wide awake.

Eventually, he admitted defeat and got up.

Damn it. He couldn’t afford a sleepless night, not now, when he was supposed to be ready to enjoy a weekend with his son. But anxiety only fuelled the fire of sleeplessness, and now he didn’t even feel tired anymore.

There wasn’t much furniture in the bedroom besides some shelves filled with old books that the former homeowners hadn’t bothered to take with them. Ari Thór had sometimes leafed through the pages of these volumes, mostly when he was trying to sleep and needed some distraction from his thoughts. He plucked a book from the shelf, almost at random, and laid his head on the pillow again.

Try as he might, Ari Thór couldn’t shake a niggling feeling of apprehension about the weekend ahead. For the first time, he was leaving the station in the hands of Ögmundur, a young recruit who had moved north for his first posting. What he lacked in experience, he more than made up for with his eagerness to learn.

Since Ari Thór had taken on the inspector’s post, he had been forced to make do with temporary replacements and officers seconded from Ólafsfjörður or Akureyri – never the same person from one case to the next. But recently, he had received approval to hire an officer for a full-time position. There had been no shortage of interest in the job, and some of the applicants boasted a wealth of experience, but Ari Thór had chosen to hire this young man, who was fresh out of police training school.

In spite of their difference in character, Ari Thór saw something of his younger self in Ögmundur. He remembered how Tómas had shown him the ropes when he first came to Siglufjörður. Now the tables were turned, and Ari Thór was the experienced officer putting the young rookie through his paces. He had to admit, though, that he had struggled to build the rapport with Ögmundur that Tómas had built with him, in spite of there being a narrower age gap between them. After trying to find sleep in the pages of a book for what seemed like an age, Ari Thór went down the rickety old stairs to the kitchen. There, he poured himself a glass of water and snacked on a piece of dried fish as he flicked through yesterday’s newspaper. He shouldn’t have bothered; there was nothing new in there, just the same rehashed stories. The only thing that really caught his eye was the weather forecast. It wasn’t great. It looked like heavy storms were expected in the north right after the Easter weekend. That was the thing about winter up here; no sooner had you dug yourself out after one blizzard than you had to prepare for the next one.

He really couldn’t afford a sleepless night; he wouldn’t last the day.

Ari Thór was on call, but more often than not, the streets of the little town were deserted overnight and the police station was a haven of calm. Usually the only calls were complaints about drunks making too much noise on their way home.

Ari Thór had gone back to bed – but was still wide awake – when the phone rang.

‘A passerby has found what seems to be the body of a young woman lying in the street. An ambulance is on the way, just in case,’ the operator at the emergency call centre said in a neutral tone.

Ari Thór hurriedly pulled his uniform on, pinning the phone to his ear with his shoulder.

‘On the main street, Aðalgata.’ ‘Who made the call?’

‘The man’s name is Gudjón Helgason. He said he would stay on the scene until the police arrived.’

Two minutes later, Ari Thór was fully dressed and stepping outside into the night. He lived just around the corner from the main street, so it would only take a moment for him to get there on foot. It was a frigid, windless night and the stars were sparkling in the sky. Nature up here was always wild and unbridled, but at this time of year, there was something not just darker about it, but somehow deeper and more distant. Ari Thór arrived on the scene at the same time as the ambulance. As he turned onto Aðalgata, a shiver ran down his spine.

On the edge of the pavement, a young woman was lying in a pool of her own blood, her body twisted into so unnatural a position, there was little doubt that she must have plunged from a great height. It didn’t take a doctor to figure out that she was dead. It looked like all the blood had come from her head; her skull was likely fractured.

As Ari Thór approached the body, he realised the woman was probably even younger than he had first thought – possibly still in her teens. He drew in a sharp breath as he saw her face.

Her gaze was eerily absent, her eyes wide open but empty, as if staring into nothing.

Ari Thór immediately knew it was a sight that would haunt him forever. 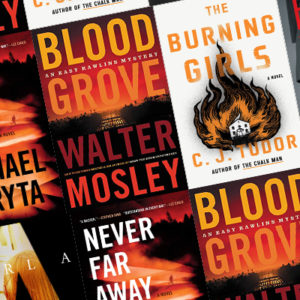 The Best Reviewed Crime Novels of the Month: February 2021 A look at the month’s best reviewed crime novels, mysteries, and thrillers. Abigail Dean, Girl A (Viking) "Girl...
© LitHub
Back to top