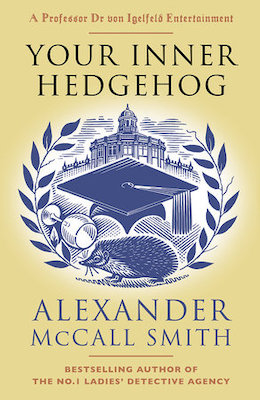 The following is an exclusive excerpt from Your Inner Hedgehog, by Alexander McCall Smith. Professor Dr. Dr. Moritz-Maria Von Igelfeld is back and thwarting stressful university politics, snooty librarians, and a possible takeover of the department.

Professor Dr Dr (honoris causa) (mult.) Moritz-Maria von Igelfeld came from a distinguished family about whom little is known, other than they had existed, as von Igelfelds, for a very long time. The obscurity of their early history in no way detracted from the family’s distinction; in fact, if anything, it added to it. Anybody can find their way into the history books by doing something egregiously unpleasant: starting a local war, stealing the land and property of others, being particularly vindictive towards neighbours: all of these are well-understood routes to fame and can lead to immense distinction, titles and honorifics. Most people who today are dukes or earls are there because of descent from markedly successful psychopaths. Their ancestors were simply higher achievers than other people’s when it came to deceit, expropriation, selfishness and murder. That none of these attributes tends to be recorded in family coats of arms is testimony to the ability of people to brush over or even completely ignore the saliences of the inconvenient past. Coats of arms of armigerous families therefore tend to embody devices that bear no relation to the means by which those families’ prominence was achieved. There are no bloody knives in heraldry, no hidden trapdoors, no evicted widows, impoverished orphans or betrayed allies. There are, by contrast, plenty of suns, moons, ears of corn and ships. If weapons are depicted, these are stylised and, most importantly, innocently sheathed. The von Igelfeld coat of arms was somewhat unusual, relating directly to the family name, in its English translation meaning hedgehog-field. The hedgehog is not a common heraldic device; indeed, it is thought to occur in no other coat of arms, German or otherwise. It is not generally considered a noble creature. Lions and unicorns abound in heraldry because they evoke, respectively, courage and charm; the modest hedgehog, by contrast, bears few associations. It scurries about the undergrowth on business of its own devising. It threatens nobody other than small grubs and insects, for whom there is anyway generally little sympathy. The hedgehog is the hero of no legend, no myth, apart from the Grimms’ Der Hase und der Igel. There is no patron saint to protect it, no Greek hero to represent it, no Hindu god whose transformational form was the hedgehog. Why the von Igelfeld family should have adopted the hedgehog, both as their name and their symbol, is uncertain. Family tradition has it that they once lived in close proximity to a field renowned for its hedgehogs, but where this field was, and even if it ever existed, is far from clear. Another tradition has it that a von Igelfeld ancestor was once saved by a hedgehog, although how a hedgehog might be capable of saving anybody has never been revealed. Dogs have saved the lives of humans, as have horses, and even, famously, Capitoline geese, but never have hedgehogs been credited with such service to humanity.

The family came originally from the eastern reaches of Bavaria. The earliest von Igelfeld is recorded in the sixteenth century, in a reference in a land charter granted to a Heinrich von Igelfeld, proprietor of a farm endowed with two active mills. After that, there are one hundred and twenty years of obscurity until another document records the transfer of a substantial estate to one Franz-Josef, Graf von Igelfeld, now apparently a count. Some eighty years later, the title seems to have disappeared, and the next von Igelfeld to be mentioned in any records has been demoted from Graf to Freiherr. That particular von Igelfeld owned a substantial parcel of land and may be assumed to have been wealthy, but a brief letter that has survived in the family archives refers to the problems that resulted from his having forgotten where his land was. And that difficulty dictated the fate of somewhere—but nobody knew where it was.

By the time of Moritz-Maria’s father,  Hans-Christian von Igelfeld, the family had largely lost contact with the land, although at least one uncle continued to be landed.

Although the name was suggestive of nobility, the family was now firmly rooted in the professional classes in and around Munich. Hans-Christian had been a professor of surgery who wrote a widely used book on the correction of incorrectly set fractures; his brother, Casper, was an engineer who specialised in designing Archimedes’ screws. The family had lived in modest comfort and would have disappeared into the haute bourgeoisie were it not for the unusual name and for their continuing sense that they belonged elsewhere, in rather grander circumstances than those in which they currently found themselves.

After completing his school education at a classical gymnasium, Moritz-Maria had enrolled at the University of Heidelberg. It was there that he had first met Florianus Prinzel, the son of a banker, a member of a student Korps, and highly popular for his sporting prowess. The relationship between the two young men was very much that of one between scholar-poet and hero-athlete. Von Igelfeld admired Prinzel for his social ease and his bravery, but realised that he could never match his social and sporting achievements. At that stage, of course, he had had no idea that years later they would find themselves as close colleagues in the Institute of Romance Philology at the University of Regensburg. Nor would he have imagined that the friendship between them would be very much resented by another colleague, Professor Dr Detlev Amadeus Unterholzer, who came from an obscure potato-growing family, and who had long been envious of von Igelfeld’s noble background. Of course, Unterholzer had other reasons to bear a grudge against von Igelfeld; these centred on von Igelfeld’s role in the events that had led to the amputation of three of Unterholzer’s dachshund’s four legs, requiring the dog thereafter to get around on a set of wheels strapped to his abdomen. That incident was still occasionally referred to by Unterholzer, in an unmistakably resentful tone, prompting von Igelfeld to change the subject as quickly as possible whenever any mention was made of dachshunds.

After Heidelberg, von Igelfeld had undertaken doctoral studies at the University of Regensburg. The subject of his doctoral thesis was linguistic shifts in the Portuguese language, with special reference to their occurrence in Brazil and Goa. This was to be the foundation, many years later, of his classic work Portuguese Irregular Verbs, a book of twelve hundred pages, hailed by many in the field as being the most significant single contribution to Romance linguistics in over a century. It was on the strength of that great work that von Igelfeld had received his call to a Chair in Regensburg. There he found himself working in the Institute of Romance Philology alongside Prinzel, who had returned from further studies in Paris, and Unterholzer, who had recently completed his Habilitationsschrift in Berlin. Von Igelfeld had heard from his contacts at the Freie Universität there that Unterholzer’s work was ‘not really first-rate’ and that most of it was ‘barely publishable’. This was tittle-tattle of the sort that abounds in academia, but von Igelfeld had noted it carefully and was once heard referring to ‘our dear, weaker colleague, Herr Unterholzer’. That condescending description had been made in private, but its effect had lingered, and Unterholzer’s work was thereafter rarely considered to be in the same league as that of von Igelfeld or Prinzel. Academia is full of injustices, and this was certainly one of them.

There were only three professors in the Institute of Romance Philology, although there were eleven untenured researchers, nine of them allocated to the three full professors, each of whom had three. The remaining two, both named Müller, were independent, having completed the necessary qualifications needed to take up a Chair if one were to become vacant. These two both eyed the Chairs occupied by von Igelfeld, Prinzel and Unterholzer with ill-concealed fascination, and secretly would have been delighted if illness or other disaster were to strike one, or preferably two, members of the professoriate. Occasionally this led to muttered remarks passing between the two of them, such as: ‘Did you think Professor von Igelfeld looked slightly pale this morning, Herr Müller? I do hope he’s not sickening for anything serious—or even fatal.’ And that might bring forth the response, ‘You’re right, Herr Müller. He would be sorely missed were he to succumb to some dreadful illness—which heaven forfend, of course.’ And then each would silently reflect on just what would happen were von Igelfeld’s Chair to be vacated. 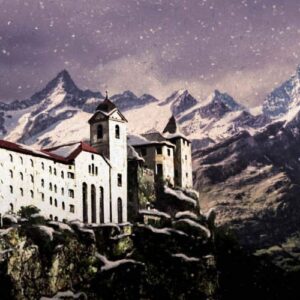 10 New Books Coming Out This Week Another week, another batch of books for your TBR pile. Happy reading, folks. * Bryan Christy, In The Company of Killers...
© LitHub
Back to top