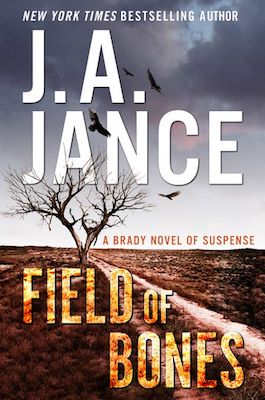 The following is an exclusive excerpt from Field of Bones, the latest thriller from Arizona crime writer J.A. Jance. In the following passage, we encounter an embattled heroine as she wakes to find herself imprisoned by a monstrous kidnapper holding several other women hostage.

Latisha Marcum awakened to darkness and to the blessing of absolute silence. Even in her sleep, she had been haunted by the quiet thumping that she’d at first mistaken as the sound of an approaching thunderstorm and by the faint scratchings that she had assumed to be the plague of a new generation of rats. It wasn’t until the next day that she learned the awful truth.

The day before, the Boss had come downstairs and selected Amelia as his current choice of amusement. While he used the key from his pocket to unlock the chain around the girl’s thin ankle, Latisha had lain on her own filthy mattress, fully awake under her blanket but feigning sleep and all the while uttering a silent prayer of gratitude that he’d chosen Amelia instead of her.

When he took one of the girls upstairs with him, that’s what he always demanded first—that she bathe. He wanted them to be clean. Afterward they were required to do whatever he wanted.

Latisha had gone upstairs on numerous occasions, and she knew exactly what went on. First she heard the water running in the old claw-foot bathtub overhead. When he took one of the girls upstairs with him, that’s what he always demanded first—that she bathe. He wanted them to be clean. Afterward they were required to do whatever he wanted. If they did well, they were rewarded by being brought back downstairs and clamped back into their chains. On occasion, presumably when they didn’t do well, they didn’t return.

So when Latisha heard the water running, she knew what that felt like—wanting desperately to be clean instead of filthy but knowing that the price of that bath was what would come later. It was what Lyle, her stepfather, would have called “damned if you do, damned if you don’t.”

To her surprise, however, while the water was still running in the bathroom upstairs, the basement door banged open, the bare bulb came back on again, and planks of the stairway groaned under the weight of the Boss’s lumbering tread. Thinking he was coming for her, too, Latisha shrank beneath her blanket. When she didn’t feel his hand on her ankle, she peered out from under the edge.

He seemed to be doing something at the bottom of the stairway. She heard a rustling sound and a series of thuds, as if something heavy were falling against something else. At last the lid of the freezer slammed shut. Moments later he slung two bulky and seemingly weighty garbage bags over his shoulder and marched back upstairs.

It seemed like an odd time to decide to empty a freezer. The old appliance had been there all along. Often, in the long silences of the night, the sound of the freezer compressor switching on and switching off was the only thing to be heard in the darkened dungeon. But until now the Boss had never taken anything out of it, at least not to Latisha’s knowledge.

After a while the awful sounds resumed upstairs. The bath was over now, and Latisha knew what came next. It was all a game to him, starting slowly enough before escalating into the frenzied sounds of bare fists hammering on yielding flesh. There would be shouts of unspeakable demands followed by first cries and later whimpers of pain. Finally the unmistakable squealing of the box springs of the old double bed in one corner of the room and the thudding as the iron bed frame pounded the wall would indicate that the session was at last coming to its soul-shattering conclusion.

To keep from listening, Latisha threw off her single blanketand rose from her filthy mattress. Then, taking her tin drinking cup with her, she limped her way through the gloom, as far as her chain would stretch, to the concrete slab in the back corner where the surprisingly modern toilet had been installed. A row of three thick glass blocks near the top of the outside wall just over the toilet allowed a tiny bit of light into this one section of the basement during daytime hours. Now, though, as the sun set outside, the gloom inside the dungeon was thickening. Soon the basement prison would once again be cloaked in total darkness.

Latisha knew she was weak and getting weaker. It took all her strength to pry the lid off the flushing tank so she could fill her cup with water. She set the lid on top of the toilet and somehow managed to keep it balanced there while she gulped down three cups of water. Early on she had asked the other two prisoners in the room why they couldn’t just leave the lid off to begin with. Wouldn’t that be easier?

“We tried that once,” Sandra had explained. “The next day there was a drowned rat floating in the flushing tank.” Latisha hadn’t wanted to drink the water at all after that, but by then the dead rat was long gone, and besides, she didn’t have a choice. It was either drink the water from the tank or die of thirst.

Still trying to shut out whatever was happening upstairs, Latisha limped back to her mattress. The clamp around her ankle was too tight, and the flesh underneath had been rubbed raw. She used some of the precious water from her cup to try to clean the wound. She didn’t want to develop some kind of terrible infection and die, because Latisha Marcum didn’t want to die. She wanted to live.

Once again in her corner of the room, she sank down onto the mattress. It was full-on dark now. She felt around blindly until she located the covered plastic storage container that held her food. Back home her mother had always kept the fridge stocked with Ziploc containers, all of them full of leftovers. Here the covered dishes were necessary for the same reason the toilet tank had to be closed—to keep the rats out.

Latisha pried off the plastic lid, plucked out a single piece of kibble, and put it into her mouth. Even now she had to fight back the impulse to gag. Dog kibble wasn’t supposed to be suitable for humans. It tasted horrible. Eating it often left Latisha with agonizing stomach cramps and painfully difficult bowel movements, to say nothing of at least one broken tooth, one that ached constantly now and made it impossible for her to chew on the right side of her mouth. All that aside, though, there was enough nourishment in the dog food to keep her alive, and that was what Latisha had decided. No matter what, she would live. Somehow she would live.

First she heard a dull thud, as though someone had fallen to the floor. Then, without warning, the door at the top of the stairs opened once more.

She’d been sitting there slowly chewing on a piece of kibble when, after a period of relative quiet, things upstairs had suddenly gotten much worse. First she heard a dull thud, as though someone had fallen to the floor. Then, without warning, the door at the top of the stairs opened once more. As the single bare bulb dangling in the middle of the room flashed on, Latisha did the same thing Sadie and Sandy had done. She covered her face with her blanket and lay there waiting to hear the sound of the clamp being fastened around Amelia’s ankle—waiting for him to leave. But this time the chain didn’t rattle. There were odd sounds from the far end of the room, but that was it. Once the door at the top of the stairs slammed shut, she reached out toward the neighboring blanket and whispered Amelia’s name, but there was no answer. Alone in the basement for the very first time, Latisha cried herself to sleep.

She had awakened much later to what she thought was the distant sound of thunder and the scratching of the rats. At least that’s what she told herself in the middle of the night when she first heard them, but now she knew the truth about those awful sounds. The Boss had locked Amelia inside that freezer and left her to die. The dull poundings and frantic clawings that had awakened Latisha had been Amelia’s desperate attempts to escape. Eventually the sounds had faded away to nothing—at least in the basement, but not in Latisha’s heart and soul, because she heard them still, every time she closed her eyes, and they haunted every moment of Latisha’s restless sleep.

All of that had happened days ago now. The next morning, or maybe the one after that, when the door at the top of the stairs opened once again, Latisha had shivered with dread, expecting that the Boss was coming for her this time. Instead he stopped beside the freezer, dropped a tarp on the earthen floor, and spread it open.

“I’m going hunting. I’ll be bringing back a new friend for both of us.”

With Latisha peeking out from under her blanket, he unlocked the padlock and then wrestled Amelia’s crouching, frozen body out of the freezer. Once he had her loose, he dropped her onto the tarp and then rolled it into a bundle. When he picked up the tarp, the shape of her frozen flesh made for an unwieldy, awkward load, and it was a struggle for him to lug it upstairs. That time he left the basement without bothering to turn off the light. A few minutes later, he returned, coming back down the stairs with another Ziploc container loaded with kibble.

“I’ll be gone for a couple of days, so you need to make this last,” he told her, placing it at the end of Latisha’s mattress. “I’m going hunting. I’ll be bringing back a new friend for both of us.”

And then he was gone. He disappeared upstairs, the light went off, and Latisha heard the door being bolted shut. Heavy footsteps trod across the plank flooring, and another door slammed shut. A few minutes later, she heard the sound of a vehicle starting up and driving away.

Long after the Boss had left, Latisha lay on the bed drowning in despair and wallowing in grief. She wept for herself and for Amelia, for Sandra and for Sadie and for however many others there might have been before and however many others might come later. When her tears were finally exhausted and the racking sobs subsided, just one sound remained in her universe—the nightmare hum of the freezer, still plugged in and still running—switching on, switching off. In the overpowering darkness that was the only thing still there—the sound of the freezer. It had killed Amelia, and Latisha was pretty sure it would kill her, too.

From FIELD OF BONES, by J.A. Jance. Used with the permission of the publisher, William Morrow. Copyright © 2018 by J. A. Jance.

The State of the Crime Novel: A Roundtable Discussion (Part 1) 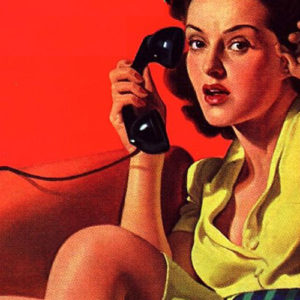 The State of the Crime Novel: A Roundtable Discussion (Part 1) Right now, thousands are gathering in St. Petersburg, Florida, also known as the Venice of Central Gulf Coast Florida, for Bouchercon,...
© LitHub
Back to top