A weird thing about ghosts is that many of them don’t seem famous. That is to say: while they might be famous as ghosts or their presences might be responsible for designating places as “haunted” in popular mythology, it seems to me that most ghosts don’t seem to be specters of individuals who were famous in life. (I could be wrong about this. I don’t particularly research things having to do with ghosts, lest I’m forced to discover evidence of ghosts.) But anyway, I don’t know, we just don’t seem to hear about the ghosts of Ella Fitzgerald, or Herman J. Mankiewicz, or Pablo Picasso, or Ito Hirobumi, or Nikola Tesla, or Bela Abzug, or Telly Savalas, or Charles Dickens, or Jesse Owens, or Octavio Paz, or Rodney Dangerfield.

The only ghosts I hear about seem to be cruel nannies who were pushed down stairs or stockbrokers who lost everything during the crash and jumped out of hotel room windows, or murderous cult members, or severely-bullied summer campers, or mistreated prison inmates, or Puritans confused about why a housing development has been built atop their burial ground. But we don’t hear anything about the ghost of midcentury television host Ed Sullivan, do we? No we do not. And I’ll be honest… that reads as kind of fishy to me. (Don’t you think the people who sought the most attention in life would also do it in death? Right? I’ve done it folks, debunked the entire concept of ghosts.) But, since it’s Halloween, I’ve done my best to locate accounts of hauntings by actual famous people. They’re all writers, because this is a literary website. I didn’t find many, and most of the ones I did mange to find are about Edgar Allan Poe, but hey. Happy Halloween!

It will surprise no one that the supernatural-horror writer H.P. Lovecraft is one of the few writers who remained on earth to haunt the living. Or actually, it would surprise everyone, since Lovecraft didn’t believe in anything spiritual (including “having a soul”) and probably would have refused, over his dead body, to return as a spirit. Regardless, in L. Sprague de Camp’s 1975 biography of the writer, entitled H.P. Lovecraft: A Biography, it’s briefly mentioned that the ghost of a man thought to be Lovecraft appeared in 1971 to a Brown University student who rented Lovecraft’s former residence at 10 Barnes Street, in Providence, Rhode Island. Lovecraft lived there from 1926 to 1933, and wrote many of his best-known stories during his period, including The Call of Cthuhlu. Why? No idea.

Of all the Brontë sisters who might have ended up haunting places after death, my money would be on Emily rather than Anne, since Emily wrote books about that stuff and Anne wrote comedies of manners. But the ghost of Anne Brontë was apparently seen in 1961, on Quogue, Long Island, New York. A staircase from the estate in Mirfield where Anne had worked as a governess (Blake Hall), had been saved from demolition when the home was destroyed in 1954, and sold to an American couple renovating a house. Once the staircase was installed, the husband claimed to have seen a thoughtful-looking woman in a full-skirted dress on the stairs. The man’s dog bristled, also, which is a clear, objective sign of the supernatural.

It’s rumored that a home frequently visited by New England’s greatest writer Nathaniel Hawthorne, the Turner-Ingersoll Mansion, is haunted by a ghost, possibly three. Located at 54 Turner Street, in Salem, Massachusetts, it served as the inspiration for Hawthorne’s House of the Seven Gables and its supernatural presence is thought to be Hawthorne himself. Hawthorne took an interest in the house because of its secret rooms, built to hide family members lest they were accused of witchcraft, including a hidden staircase going up to the attic. The attic seems to be the hub of supernatural activity; in the house, a man has been seen climbing the stairs, and a little boy wearing nineteenth-century clothing who has been seen around the property, can also sometimes be heard giggling and running around in the attic room (which I’m sure we can all agree is terrifying). It’s popularly thought that this might be Hawthorne or his son Julian, but as children (though they both lived well into adulthood). And the ghost of a woman, believed to be Susanna Ingersoll (Hawthorne’s cousin whom he visited there in his youth) has also been seen. She can be heard whispering on the stairs—and once, perhaps, was caught on photograph.

Concluding our brief list is the one you’ve all been waiting for: the ghost of Edgar Allan Poe. He is wildly believed to haunt several locations in and around Baltimore, the city where he died tragically at age forty. One of these locations is the catacombs of the Westminster Presbyterian Church (which just seems haunted to begin with), which was built on top of the Old Western Burial Grounds. Poe was buried there, though he was not interred in one of the graves that the church was constructed upon. But people claim to have seen his spirit wandering through the tunnels, as well as the hospital where he died, the military fort where he was based when he unhappily served in the army, and the street where he lived. (The good thing about Poe’s ghost is that it’s probably very easy to distinguish—he has a very famous, very distinctive visage). And his presence has also been detected in another, more lively location, his favorite bar: a Fells Point tavern called The Horse You Came in On (adorable) that is the longest-operated bar in America. Apparently, this bar is the site of many unexplained phenomena, including that if you loudly deny the existence of Poe’s ghost, bottles will drop and your seat might fly out from under you. Check, please. 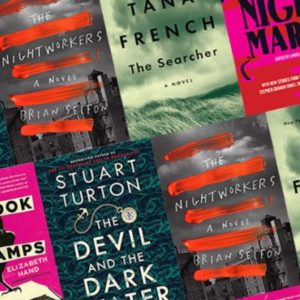 Tana French's The Searcher, Elizabeth Hand's The Book of Banners and Lamps, and Lincoln Michel and Nadxieli Nieto's new collection,...
© LitHub
Back to top