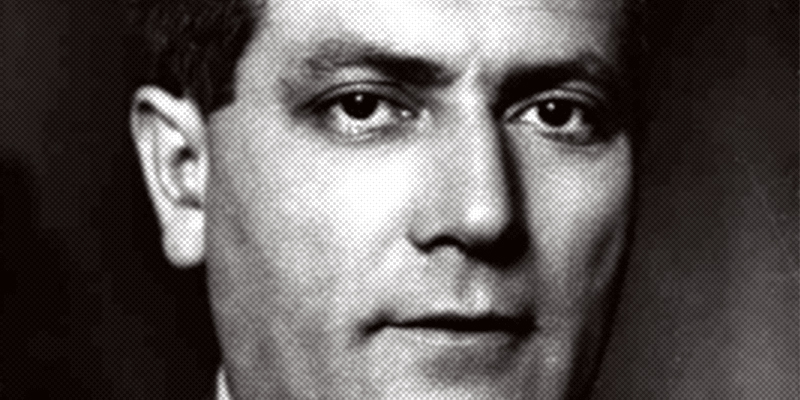 In the summer of 1935 Fodor learnt that a private detective had exposed Hylda Lewis, the flower medium, as a fraud. On the instructions of the Society for Psychical Research, Edgar Wright of Wright’s Detective Agency had followed Hylda to the seance that Fodor and Irene attended in January. Wright shadowed her by bus to Oxford Circus from her office in the City, watched her buy flowers from a series of shops and stalls and then slip into a side street to bite the stalks off a bunch of roses. Hylda stashed the roses in an attaché case, bought more flowers, and stopped again, outside a Lyons restaurant, to slide several stems of lily of the valley into her coat. Finally she proceeded by bus to the British College of Psychic Science in South Kensington.

In the darkened room, Fodor realized, Hylda had made it appear that the flowers were pressing out of her body by secretly prising them out of her clothes. He also discovered how she had acquired her eerily accurate information about his daughter’s life: as a switchboard operator for a City firm, Hylda was able to eavesdrop on the telephone calls of people due to attend her seances.

Fodor felt betrayed by Hylda Lewis, whose phenomena had so impressed him and the other investigators at the Institute. He was learning that the golden age of psychical study was also the heyday of supernatural hustle, and that to verify his subjects’ claims he would have to turn sleuth himself.

When Lajos Pap materialized a snake and other apports at the International Institute in 1935, Fodor tried to work out whether he could have produced them by normal means. The staff of the Natural History Museum in South Kensington identified the snake as a Central European dice snake, about two years old and not long dead. Fodor rang reptile shops listed in the London telephone directory and found that though the species was available in stores in Merton and Islington, neither outlet remembered serving a man of Lajos or Chengery’s descriptions. He arranged for Irene to be given access to Lajos’s hotel room, where she found a suitcase with a double lining, and he tried to establish whether Lajos really had a medical reason for wearing a whalebone belt beneath his clothing. Fodor hid a pebble on his body, and challenged his colleagues to find it. He put folded sheets of paper in his shoes. On completing his experiments, he concluded that Lajos Pap could have smuggled a live snake over from Hungary in the lining of his suitcase, drowned it in the hotel washbasin and zipped it into his belt. Before the seance he might also have pressed the orphanage documents into the soles of his shoes; lodged a stone in his navel; tucked trinkets behind his false teeth; stored rosebuds in his cheeks; and stuffed a gold coin up his nose. ‘Our verdict is “Not Proven”,’ Fodor told the Institute’s members when the Paps returned to Budapest.

Fodor unmasked other hoaxers with infrared photography, a new technology that made it possible to record images in the dark. His pictures of a ghostly form in the home of the Dundee railway engineer Charles Stewart revealed the railwayman himself, dressed in a white sheet. Fodor sent Mr Stewart copies of the photographs without comment. Infrared photos of the well-known trance medium Agnes Abbott showed that she was impersonating an ethereal visitor by waggling a luminous spirit trumpet on her thumb. ‘Mrs Abbott, the game is up,’ said Fodor, dramatic as a movie detective. But he was careful not publicly to shame her. He reminded his team that they should be kind to mediums even when they caught them cheating. Fake psychics were only trying to earn a living, after all. ‘Never at any time must a bullying attitude be adopted,’ Fodor wrote, ‘and the whole business must be carried through with dignity… and with gentleness and consideration.’ It would, in any case, be bad business to be rude. If word got around that the Institute treated its subjects roughly, it would have no one with whom to experiment.

In 1935 Fodor and Irene befriended an American couple called the Woodwards who lived in a neighboring apartment block in Chiswick. Dick Woodward was a tall, good-looking man in the film business, with whom Fodor would sit up until one in the morning, playing canasta and drinking whisky.

One evening in June, the Fodors and the Woodwards were playing bridge at the flat of another couple when Dick Woodward announced that he was able to levitate flowers. Fodor ran up to his own flat, on the fifth floor, to fetch a potted geranium about two feet tall. He returned to his friends’ fourth-floor apartment, and switched off the electric lights. The sky was clear, and by the light of the moon Fodor could see his companions’ faces, the furniture, the pattern of the carpet, the luminous dial of the wireless set. He put the geranium in the middle of the room and sat against a wall.

Woodward stood about three yards from the pot, his arms outstretched. ‘His breathing became heavy,’ recalled Fodor, ‘he snapped with his fingers, as one snaps to a dog; his breath came faster and faster, and suddenly the branches of the geranium swayed and twisted.’ Woodward fell back on the sofa, his arms out wide, his head thrown back. Then he stood up and began again. This time ‘a storm broke loose among the branches and leaves of the geranium. First there was a faint rustle; then, in silence but with the force of an explosion, a shower of leaves and flowers shot up in the air.’ Fodor counted seven leaves and eight flowering twigs strewn around the room, along with a bud and a scatter of petals. He was staggered. ‘You are one in a million!’ he told his friend.

Woodward produced no further phenomena that year, but in September 1936 he was roused to action after reading an interview that Fodor gave to Psychic News. ‘At present, in England,’ Fodor told the magazine, ‘there is no contemporary scientific evidence for the reality of materialisation.’ Woodward told Fodor that he would prove him wrong by producing just such evidence. He made Fodor promise him dinner at the Hungaria—a top-notch Hungarian restaurant in Regent Street—if he got him photographic proof of flower levitation.

At the first attempt, in the Fodors’ flat, Woodward consumed a large quantity of whisky. Fodor heard him hiss and pant, and saw the green and white carnations tremble violently. But none of the photos registered any movement among the flowers.

They tried again a week later. Fodor got in supplies of alcohol for Woodward, who turned up at 10.45 p.m. He already seemed to have had more whisky than was ideal for psychic experiments, said Fodor. ‘Nevertheless, he fell greedily on what I had for him.’ In the Fodors’ living room, Woodward put his carnations in a vase, which he placed in front of a bookcase on a carpet on the parquet floor. Woodward was soon very drunk. By midnight he was dancing alone to gramophone records while muttering what sounded like: ‘I am afraid you will catch me in what I do. I want to talk. Whisky is darkness itself.’ At 1.10 a.m. he succeeded in creating a shudder among the flowers, but then Fodor noticed the glint of a safety pin on the carpet, and a cluster of black threads stretching from the pin to the carnations.

‘So,’ Fodor asked, pointing to the thread, ‘is this how the flowers moved?’

‘Yes,’ replied Woodward carelessly. ‘What else did you think?’

‘That is why you needed the background of the books. It was so the thread would not be visible.’

Woodward had moved the flowers by pulling on threads that he had looped round their stems. Fodor told him that he found his conduct despicable. He could not trust him again.

Woodward had moved the flowers by pulling on threads that he had looped round their stems. Fodor told him that he found his conduct despicable. He could not trust him again. Woodward said that he had only been trying to help him by providing physical phenomena. ‘I showed him the door,’ wrote Fodor, ‘and he left.’

A few days later, Woodward begged for a reprieve. He said that his phenomena were genuine, and that he had pretended to be a fraud in order to test Fodor: many people on the block said that the ‘spooky’ business was a racket, and he wanted to see whether Fodor was sincere in his belief in the supernatural. He said that he would try again to lift flowers, under any conditions that Fodor imposed. He agreed to be filmed at the Institute by infrared light.

At the International Institute on 11 December, Woodward drank a bottle of cheap whisky, provided by Fodor. He stood on a platform in a dark suit and red shirt, his features twisted in a diabolic grimace, and waved his fingers at a bunch of white carnations until they shook in their vase. The session broke up at 9 p.m. so that the sitters could tune in to Edward VIII’s radio broadcast: the king announced that he was giving up the throne in order to marry the American divorcée Wallis Simpson.

The filming resumed the next evening, by which time George VI was King of England, and at Woodward’s bidding one white carnation leapt from the vase, rising eleven inches into the air. Afterwards, Fodor examined stills from the film. Woodward’s palms, wrists, fingers vibrated and blurred as the stalk of the flower bent and spun away from him, its head a shining haze. With the help of a floor plan, Fodor made calculations about the speed and trajectory of the carnation and how it corresponded to the quivering of Woodward’s hands. He magnified the images to check for thread.

But back in Chiswick, Fodor heard that Woodward was boasting about how he had duped him. When confronted, Woodward denied fraud but was then defiant: ‘Why shouldn’t I go about pulling threads?’ Fodor denounced him as a scoundrel and a liar.

Fodor had been humiliated in front of his neighbors as well as his colleagues. To have given Woodward a second chance after the original discovery of the thread now seemed helplessly gullible. And there were rumors that Dick Woodward had betrayed him more intimately, by having an affair with Irene. Soon afterwards, Fodor left Chiswick with his family. He would not be so credulous again. 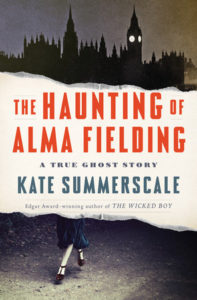 Kate Summerscale lives in London. She attended Oxford and Stanford universities and then worked at the Independent and the Daily Telegraph, where she was obituaries editor from 1995 to 1996. She is currently the editor of the Independent on Sunday Review. Her latest book, The Haunting of Alma Fielding, is now available from Penguin Press. 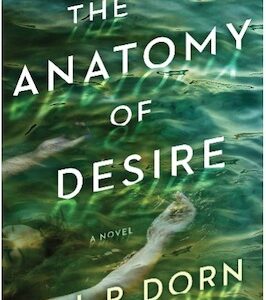 DUNCAN MCMILLAN, INTERVIEWER: What was going through your mind that night in the tent with Sandy? CLEO RAY: I could look...
© LitHub
Back to top