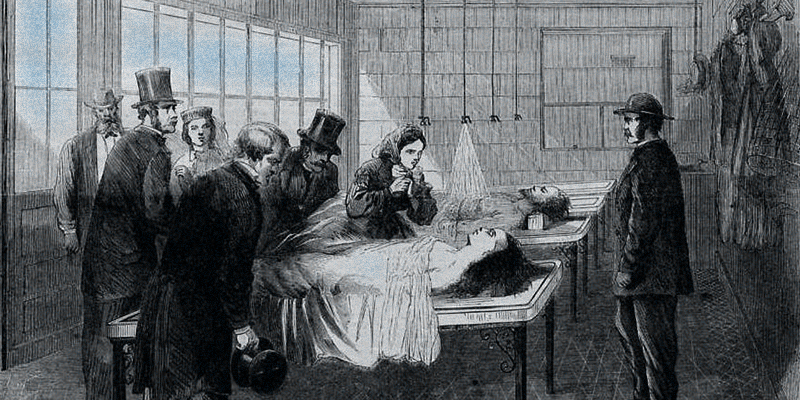 Imagine you’re a time traveler and find yourself stuck in nineteenth-century America. The year is, say, 1883. The location, New York City. Like today, there’s lots to see and do here in the Empire City. Be sure to catch a glimpse of the Brooklyn Bridge while it’s still under construction. Hop on the elevated railway and visit Central Park. Or see the newly installed electric street lamps that line Broadway.

But danger lurks here too. Pickpockets and confidence men haunt the streets. Barroom brawls are a common occurrence. And then there’s disease. Cholera, typhoid, smallpox, yellow fever. Though scientists of this era are beginning to understand how these diseases are spread, most people still blame poisonous air vapors known as miasma. Thanks to all those shots you got before leaving the twenty-first century, you’re largely immune. But that doesn’t do you any good when, while side-stepping a pile of horse manure, you’re struck by a passing wagon. Your leg is broken.

What happens next depends largely on how much money you have in the bank (or stashed under your mattress). If you’re wealthy, your footman will assist you home and summon a private physician. Any care you require—even surgery—will be done here. A hired nurse will tend to you after.

But you’re a visitor to this city and just spent the last of your money at the fancy shops near Union Square. You haven’t a footman to help you home. Instead, a crowd gathers around you, attracting the attention of a nearby police officer. He hurries back to his station and telegraphs for an ambulance.

At the breakneck pace of ten miles an hour, the horse-drawn ambulance races toward you. A surgeon leaps from the back of the wagon when it arrives. Inside his case are all the necessities: a stomach pump, a tourniquet, splints and bandages. A jug of whiskey and a straitjacket are on hand in the wagon should the situation call for them. He splints your leg and helps you into the wagon.

The driver jostles his reigns, and you’re off. There are several hospitals in New York at this time. Some private, some public. The private hospitals boast handsome brick facades, spacious corridors, and lofty wards. Some even have a limited number of private rooms adorned with Moroccan rugs and polished walnut furniture. These cost between $15—$50 a week (about $430 – $1,430 today).

But remember, you haven’t that kind of money. Private hospitals are selective in their clientele. The ambulance summoned for you came from a public or “charity” hospital. Less well-funded and unable to cherry-pick their patients, these institutions have higher death rates, sometimes topping 20 percent of those admitted.

Your ambulance arrives at a great hulking building that could pass for a prison, and the gates are opened. The wagon pulls up in front of the receiving ward, and an orderly helps you inside. Here the house surgeon will decide your fate. He examines your leg and declares surgery is required. It’s off to the operating theater then.

As electrical lighting is still a novelty, the theater is lit mainly by sunlight. Rows of benches rise above the operating stage, and onlookers crowd in. Most are medical students, eager to learn from the real-life demonstration. A few smoke cigarettes. One is eating a sandwich. Another sneezes in your direction before he finds his hankie. As most medical schools still forbid women from enrolling, all those in attendance are men.

You’re placed on a table in the center of the stage. Don’t worry; it’s probably been wiped down since the last case. If you’re lucky, the instruments have been too. Perhaps the surgeon has read of Joseph Lister, whose recent work suggests that tiny organisms—germs some people call them—are responsible for disease, not miasma. In that case, the instrument may even have been disinfected. He might wash his hands too. But don’t count on him changing his clothes or donning sterile gloves—all that comes much later. The blood-stained smock he grabs from a peg on the wall was the same he wore for the previous case.

Still, you can be glad for one thing: anesthesia. Gone are the days of holding patients down while the surgeon quickly sawed off limbs or opened body cavities. You’ll likely be dosed with ether and remain unconscious during the entire procedure. You’ll miss the surgeon’s lecture, of course, but surely that’s preferable to the pain.

When you awaken, you’re on one of the surgical wards—a long open room with rows of beds lining each wall. Only patients of your same sex are here. Were this a private hospital, you’d likely be segregated by race as well. All the beds on your ward are filled, some with two or more patients. But it’s clean, quiet, and well ventilated. That’s all thanks to the nurses.

Had you the misfortune of landing here a decade ago, your nurse would have been untrained and possibly illiterate. She might even have come from the workhouse or prison on Blackwell’s Island. The meat missing from your stew or your dose of brandy a little light? That was likely her handiwork.

Now, however, the nurses go through a rigorous two-year training program. Only women of “good breeding” are admitted. They must also be well-educated, non-disabled, and unmarried. They live onsite at the hospital or in a nearby group home. Drinking, cursing, and cavorting with the opposite sex are forbidden. Anything deemed unladylike or immoral can get a trainee expelled.  They study everything from bedmaking to medication administration to the application of leeches. They speak in hushed voices to maintain the calm of the ward and are on constant lookout for dust, drafts, and the dreaded signs of hospitalism (i.e. infection).

Since you’ve just come from the operating theater, the nurses are particularly wary. Gangrene, pyemia (pus-filled abscesses), and blood poisoning are common complications of surgery. For some procedures, like amputations, the chances of dying within a month after surgery are over 50 percent.

Treatment for these infections varies. Some wounds are left open to drain. Others are sprinkled with cold water. Still others are washed out with carbolic acid, a common disinfectant of the time. Poultices of linseed-meal, charcoal, or powdered mustard may be applied. But one treatment is noticeably absent: antibiotics. The discovery of penicillin and other such medicines is still decades off.

In addition to watching out for hospitalism, your nurse has taken pains to see that you’re comfortable. Hot bottles have been placed near your feet to keep them warm, and a metal basin is at the ready. (Vomiting is a frequent side effect of the ether.) For a day or two, you’ll get only milk, beef tea, or brandy. Then you’ll graduate to gruel, poached eggs, and boiled mutton chops. When you’re well enough to rise, the nurse will assist you onto the balcony or down to the lawn for some fresh air. But don’t expect to be discharged anytime soon. The average hospital stay during this era is upwards of 30 days.

From the relative comfort of your ward, you hear tell of other parts of the hospital. In the basement lie the alcoholic cells. It’s not uncommon for the police to call an ambulance when they encounter someone passed out on the street from intoxication. These patients are quickly assessed and brought to these cells to dry out. Some fall victim to what’s known on the streets as the “the horrors”—trembling, sweating, nausea, vomiting, hallucinations—as they withdraw. Of these, a fair number die.

There’s also the Insane Pavilion. Crowded with those whom society deems “idiots” and “lunatics,” this building is only a halfway point for most. An “Examiner in Lunacy” assesses those brought here to determine whether they may be released or are committed to an asylum. Here in New York City, a diagnosis of insanity means a trip to the notorious Octagon on Blackwell’s Island. From vermin-infested cells to mandatory cold-baths to outright abuse, conditions at the Octagon are worse than anything you’d encounter here at the hospital.

A ferry ride to Blackwell’s Island is not the only trip patients make from the hospital, though. With medical knowledge and aseptic practices still in their infancy, many patients’ final stop is the morgue. This low-slung building near the docks is a place of morbid curiosity for many in the city. Here the unclaimed dead are laid out in a room with large windows affronting the street in the hopes that passing friends or relatives might identify them.

After seventy-two hours, those bodies yet unclaimed are placed in a rudely fashioned coffin and ferried to Potter’s Field on Hart’s Island. That is, unless the morgue keeper has set them aside to be delivered to one of the city’s many medical colleges for dissection. A grim practice to be sure, but one that prevents grave robbing. Before the passage of the “Act to Promote Medical Science and Protect Burial Grounds” in 1854, it was common practice in New York for medical schools to pay grave robbers for cadavers. The act, informally known as the “Bone Bill,” allowed “vagrants dying, unclaimed, and without friends” to be given to these schools for dissection.

Thankfully, you’ve avoided such a fate. After a few weeks’ time, you’re deemed well enough for discharge. The staff wishes you well and sees you to the front gate. The bill for all the care you’ve received? Free! Yours was a charity hospital, after all. A private hospital might have charged a small weekly fee for board (more if you were in a private room), but nothing like the enormous bill you’d get after a stay in a twenty-first-century hospital. Still, I’m sure your glad when your time machine is up and working again and you’re whisked back to the future where operations are performed with sterile equipment and without an audience.

Bellevue: Three Centuries of Medicine and Mayhem at America’s Most Storied Hospital by David Oshinsky 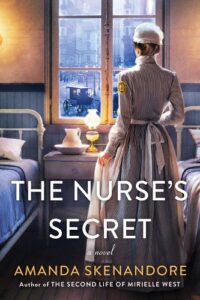 Amanda Skenandore is an award-winning author of historical fiction and a registered nurse. Her debut novel, Between Earth and Sky was a Publishers Marketplace Buzz Books selection and winner of the American Library Association's RUSA Reading List award for Best Historical Fiction of the year. Her third novel, The Second Life of Mirielle West was named an Apple Best Books of the Month and a Hoopla Book Club Pick. Her new novel, The Nurse's Secret, is now available from Kensington Books. She lives in Las Vegas, Nevada and can be found online at AmandaSkenandore.com.
http://AmandaSkenandore.com

Books and Movies That Blur the Line Between Justice and Revenge 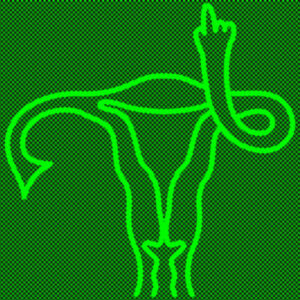 This is not a piece on writing about abortion as crime. This is a call to do crimes in order to secure reproductive choice,...
© LitHub
Back to top