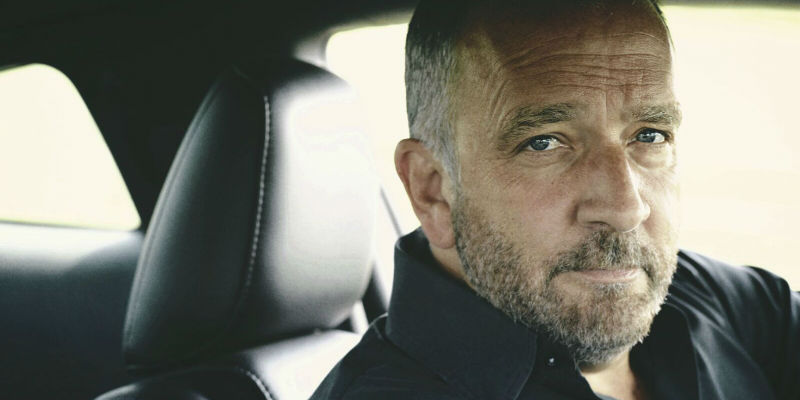 Prison Libraries, Writing for the Screen, & Capturing the New D.C.

George Pelecanos is the patron saint of literary D.C. He’s an enormous literary advocate in the city, and for the city. TV watchers might know him for The Wire and The Deuce, set in Baltimore and New York City respectively, but in his novels and short stories, he’s devoted to the District. Not to the shiny parts, not to Capitol Hill or K Street, but to the city where he’s spent most of his life, and where I’ve spent most of mine. 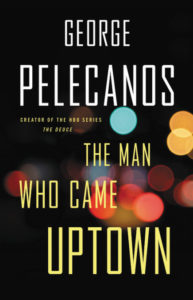 I’m not a neutral reader of George Pelecanos. How could I be, when his newest novel, The Man Who Came Uptown, is set ten blocks from my apartment? Its characters eat at my favorite Sichuan restaurant and drink at the bar where my boyfriend plays darts. The hero, Michael Hudson, orders Elmore Leonard novels from Upshur Street Books, where I used to work. I’m delighted by seeing my city on paper, of course. But I’m implicated, too. The Man Who Came Uptown wrestles with gentrification on every page, and as both a reader and a Washingtonian, so do I.

Notice that I didn’t say The Man Who Came Uptown was a novel about gentrification. I could have. I could also say it’s about the corrupting pursuit of money, or about how difficult it is to live according to your ideals—a struggle shared by Michael Hudson and his foil, a private investigator named Phil Ornazian. But at its core, The Man Who Came Uptown is a novel about reading. It’s an absolute love letter to books. Michael Hudson becomes an avid reader in the D.C. Jail, thanks to a prison librarian named Anna, and much of the novel is devoted to the characters and authors they love.

It’s a rare treat to read Michael Hudson’s joy at discovering Willy Vlautin and Edward P. Jones. (It’s too bad he’s a George Pelecanos character, or he’d love Pelecanos’ earlier books.) It’s an even rarer treat to read a suspense-filled, heart-stopping crime novel that has as many book clubs as it does car chases. I don’t know a single writer other than George Pelecanos who could pull that off—and I may not be neutral, but I promise you, he did. The Man Who Came Uptown will keep you up all night, and when you finish it, all you’ll want to do is read more.

Lily Meyer: Writing across racial lines is an enormous challenge, and one you’ve always undertaken in your novels. As a Washingtonian, I know how crucial that is, but how do you describe its importance to non-D.C. readers? To yourself? And how do you make sure you’re doing it right?

George Pelecanos: From the beginning of my career, thirty years ago, I knew that I was going to write about the side of Washington that had been previously underrepresented in fiction. When I was growing up, the population of D.C. was 70 to 80% percent black. It was a black city, infused and enriched by black culture, and to me, despite the recent change in percentages, it still is and always will be. I couldn’t ignore that nor did I want to. If I was going to write about D.C. with honesty, I had to be diligent and also unafraid to do my work. Mostly, I wanted to respect people. All people. That’s the key.

LM: The Man Who Came Uptown has an exceptional amount of local detail, and because it’s set in my neighborhood, I know that nearly all the places and people are real. How does anchoring yourself in reality, and in geography, help you write fiction?

GP: It helps my fiction to place the work in real settings. It helps me see my book as I write it.  Michael Hudson’s home is a real house that I chose after spending time on his street. Same with Anna’s, and Ornazian’s. I’ll approach people and ask them what’s going on in their neighborhood. Last year I made a film, D.C. Noir, shot in all four quadrants, but set mostly in Petworth and Park View, the neighborhood where The Man Who Came Uptown takes place. We got to know many of the locals and recruited them as extras and as crew for our film. Getting acquainted with them helped me with my fiction writing, too.

I’m saying, every human interaction informs me, whether I’m in public high school classrooms, or visiting with prisoners in lockup, or out on the street. I’ve been mostly living in New York the last couple of years, so coming back to D.C. intermittently has been somewhat of an eye opener. The city is changing very rapidly. Too fast for me, but hey. I incorporated that into the new book as well. Michael Hudson comes out of the D.C. Jail to a city changed. He has to adjust. We’re all learning how to deal with the New D.C.

LM: What are the sounds and images you return to most when you write about D.C.? Colors, smells, intersections—what are your internal D.C. touchstones?

GP: I take walks and ride my bike in the city. Since I live just over the District Line in Maryland, I find myself on the Georgia Avenue corridor more often than not, but I also make a practice of going into Northeast and Southeast to try and explore the neighborhoods that I haven’t paid enough attention to in my work. I like taking photos. The alleys and the crime lights are beautiful at night. I have my favorite back-trails in Rock Creek Park. Proportionately, I spend a great deal of time in the city’s cemeteries. I’m not a morose person; there’s just something there for me.

LM: Your dialogue is amazing—crackly, full of life. How has writing for TV impacted the way you write your characters talking? And on a given day walking around D.C., how much eavesdropping do you do?

GP: Always eavesdropping, always working. Part of my job involves sitting in a bar by myself, having a quiet drink, or dropping in on trials down at the courts. When I was a kid I rode the D.C. Transit buses down to my dad’s Dupont Circle diner, where I worked in the summers. I was listening then, too.

Always eavesdropping, always working. Part of my job involves sitting in a bar by myself, having a quiet drink, or dropping in on trials down at the courts.

The dialogue in my novels was what made movie and TV people reach out to me. It was my ticket in. But in general my prose has improved because of the discipline required in writing scripts. Screenplay writing is not easier than writing fiction. The form teaches you to do more with less. So my prose has gotten leaner since I’ve been writing for the movies and TV, and that’s a good thing.

LM: How did you wind up writing a crime novel about the value of literature? And how did you make it work?

GP: I’ve spent years working in prisons and jails, doing reading and writing programs with incarcerated individuals, and I’ve seen first-hand how books enrich and positively impact people’s lives. Books certainly did that for me. I wanted to write about it before I kick. It’s a love letter to reading.

LM: Which character in The Man Who Came Uptown came to you first? And once you had the characters, how did you put together the plot?

GP: The first character that came to me was the jail librarian, Anna. I had gotten to know Danielle Zoller, the D.C. Jail librarian, who at the time delivered books on a cart to the prisoners on their blocks on a daily basis (they have since opened an actual library space in the jail). I’m intrigued by people who do good things for a modest living when they could be pursuing more lucrative careers. I had been doing programs in institutions through PEN/Faulkner and the Free Minds Book Club for years, so I had a lot of material in my head.

Michael Hudson was a creation, but he’s based on many men I have met inside the walls.  And I have known private detectives like Phil Ornazian, who sometimes cross lines. Thaddeus Ward, who becomes Ornazian’s sidekick, is based on bail bondsmen I have met. Everyone is reality-based.

As for plot, I don’t outline my books. I know that sounds like bullshit to people who think that there is a formula to writing, and I don’t want to say that it’s the only way to write a novel, but it’s my way. I do a lot of research up front, and once I find the soul of my characters, they give me the story. It’s the way I’ve always worked.

LM: The question of vigilante justice in The Man Who Came Uptown is huge. Ornazian, as Thaddeus Ward puts it, has “that hero thing.” He wants to be a rescuer, no matter what the means. Do you sympathize with that?

GP: Sure. There are few villains in my books. There are people who do bad things, but they don’t believe themselves to be bad. Usually, after Ornazian and Ward pull rip-and-runs on pimps and thieves, they’re not thinking about the adrenaline rush of the victory or their gains. They’re thinking about their families. Ornazian does some good things for people in the book. He’s unclean, and he’s human.

LM: Right at the end of the novel, Ward brings up the time “that white-supremacist dude came to town and someone just up and coldcocked him right in the face.” There are white supremacists in the plot, but that’s your only overt reference to the Trump era. Why put it in, on the one hand? And on the other, why only one?

GP: I didn’t want to write about Trump. The literature and allegorical fiction about Trump that has been published since his inauguration, thinly veiled or not, has pretty much failed. Why acknowledge him? Demagogues have been around since men have walked on two feet, and it’s just not very interesting. On the other hand, the rising profile of the white supremacist movement these past couple of years is pretty disturbing, and Maryland has a relatively high rate of active followers. I thought I’d work it in.

LM: How do you see this novel, and your writing more broadly, as a tool for social advocacy?

GP: I don’t believe that my novels can cause broad social change, although it has happened with other authors. It’s fair to say that The Grapes of Wrath changed the consciousness of the nation, which is one of the reasons I place Steinbeck so high in the pantheon, despite his disfavor with literary gatekeepers. I have been asked this question many times with regards to my work on The Wire. I’ve met several people over the years who say that the series inspired them to become teachers, or to work in advocacy, or to volunteer in soup kitchens. Once in a blue moon someone will tell me the same thing about my books. And that, to me, is the most I can hope for. That someone who is a better person than I am will read one of my books and go out and do something positive for someone who is less fortunate. I 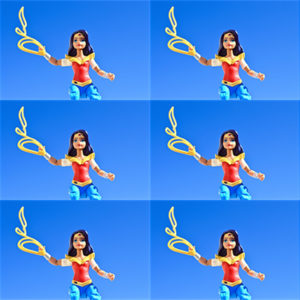 I love a good young adult thriller with a strong female lead. There’s something fantastic about the immediacy of a YA novel...
© LitHub
Back to top