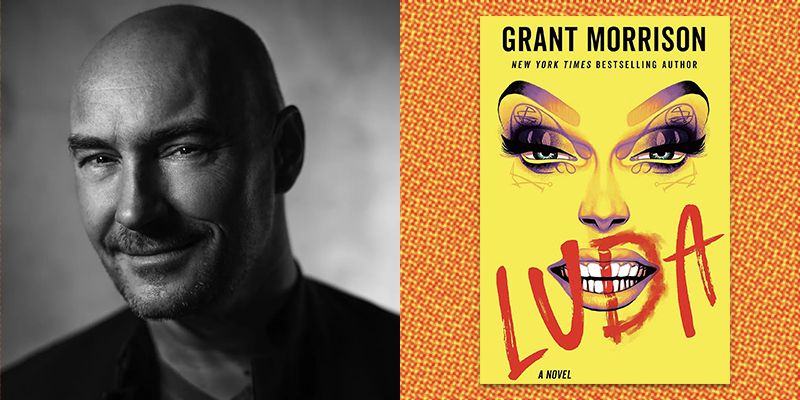 Grant Morrison is best known for their innovative work on comics, from the graphic novel Batman: Arkham Asylum to acclaimed runs on Superman, Batman, Wonder Woman, and the X-Men, as well as their subversive creator-owned titles such as The Invisibles, Seaguy, The Filth, and WE3. Their debut novel, Luda, is the story of an aging drag queen usurped by their promising protégé while performing a pantomime.

Morrison was kind enough to answer a few questions about genre, gender, drag, and the art of pantomime.

Molly Odintz: Luda is all about the instability of identity, exemplified by drag. What did you want to say about the identities we are assigned, and assume?

Grant Morrison: At the simplest level, I suppose I want to say that ‘identity’, at least from my point of view, appears to be conditional and refuses to be contained by any label; how does the ‘identity’ of a person as a two year old child square with that same person’s alleged ‘identity’ as a 40-year old or as a dying 90-year old in a failing physical frame – our bodies and minds and how we feel about ourselves, and who we are within a larger constantly shifting and rearranging system, are subject to such radical transformations over decades that were we to speed a human life up to last ten minutes rather than 80 years the result would resemble a radical metamorphic shifting of shape and size, intellectual capacity and ‘personality’. The idea of a single label adequate to that process seems absurd.

MO: There’s a unique voice to the novel. How did you develop your main character’s style of narration?

GM: It took a little while to get it right. Once I’d decided to tell the story from the point of view of a single unreliable narrator, I felt it was important to keep the language lively and colorful, which fit also with the novel’s theme of drag and performance; I wanted every sentence to be in drag, in the sense of heightened, performative and extravagant! I was aiming for a rich and dazzling, almost psychedelic overload of sensation.

I borrowed some elements of Oscar Wilde and Quentin Crisp along with a sprinkle of Hunter S. Thompson and others, pulling it all together with the heated, overwrought and pearl-clutching style of tabloid journalism to create a kind of contemporary mock-Gothic voice.

MO: There’s quite a bit about the history of pantomime in the book. How did you get interested in this art form, and what was behind having the characters perform a Thousand and One Nights?

GM: As a kid in Scotland, pantomime was a staple of growing up. Every year we’d be taken to see a motley collection of TV and screen stars make flamboyant fools of themselves in these deranged and lavish musical spectaculars. It’s one of those things so deeply baked into a typical British childhood that we tend to take it for granted.

Of all the pantomime ‘Dame’ roles, traditionally played by men in drag, the formidable Widow Twankey is the gold standard, so tackling that character meant going to Aladdin. Originally a story from the Thousand and One Nights collection of Middle Eastern folk tales, the pantomime Aladdin is set instead in in Peking where the young Aladdin becomes the son of Widow Twankey, a Chinese washerwoman!

Pantomime’s simulated, artificial world of gender and culture confusion appealed to me as the setting for the novel; a perfect microcosm of our world where everyone is in drag, filtered, mediated, curated, acting out ideal selves in a world of chaos and confusion.

MO: Luda is often a contemplation of aging and fear of replacement. What were you thinking about in terms of capturing the passage of time?

GM: Ultimately, all of us who stay alive long enough will face that moment when we fully understand that we are here to be replaced in the end, that we are no longer the glamorous young stars of the movie but now must assume secondary ‘character’ roles! There’s a fear there obviously but also a kind of relief.

The character of Widow Twankey exemplifies that—our narrator Luci LaBang is a former young drag star who finds her former options reduced to playing menopausal comedy roles and very loudly laments the passing of youth and her former allure! In the seductive form of Luda, Luci is obliged to confront the physical embodiment of all that she feels she has lost!

MO: There’s so much magic in this novel. Alex Segura’s blurb for your book talks about you as a “modern mythmaker”—would you agree? Is Luda a dark fairy-tale?

GM: Quite literally to the extent that it’s very much an updated version of the story of the aging wizard Merlin and his captivating young apprentice the teenage witch Nimue or Vivienne as she’s named in Tennyson’s ‘Idylls of the King’. In the story, Vivienne flatters the self-deceptive old fool into transferring his magical power to her, at which point she seals him in an oak tree for all time! In Luda, the oak framed mirror plays the part of the tree!

MO: You’re equally playful with genre and gender. Do you see that playfulness with both as related?

GM: I suppose I see genre as a kind of literary Drag or Glamour, where certain elements of the human experience are foregrounded at the expense of others in order to create a heightened, uncanny and fundamentally Glamorous effect. The horror novel tends to edit out any of the day-to-day absurdities and non sequiturs of the human condition that would undermine its effect, so too the comedy or thriller, which de-emphasize everyday sadness or boredom to concentrate on evoking a specific and narrow range of flavors. Life itself isn’t quite as restricted as genre opts to be and we can experience horror and comedy on the same day, often at the same time! I wanted Luda to reflect that as a way of emphasizing the contrast between the ordered rehearsed world onstage and the painful unscripted turmoil of our real lives. 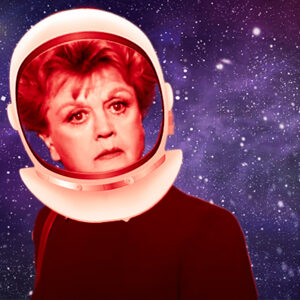 Several years ago, I was chatting with an editor and mentioned an idea I had about clones and murder in space. She loved...
© LitHub
Back to top