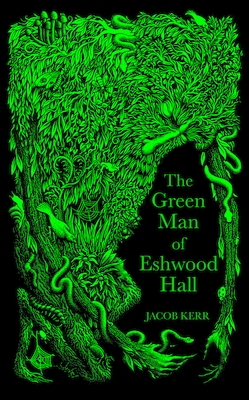 The following is an exclusive excerpt from The Green Man of Eshwood Hall, the first in a series of folk-horror novels from debut author Jacob Kerr. Set in the early 1960s, deeply rooted in folklore, and exploring the power of the imagination, the novel follows Izzy, a neglected 13-year old living in Eshwood Hall – a grand house in the North East of England that has fallen into a state of disrepair, surrounded by wild, sprawling woodlands.

Izzy was just dawdling along, savouring her freedom, following a rough sort of path that led into the woods. The River Esh was somewhere near: the air was heady with the sparkle of running water. Maybe the path would lead to the river, or maybe it was a way through the woods, she didn’t mind. Spring was finally getting started, and the alders were just coming into bud. Funny trees, alders: even in bud they looked half-dead, all scurfy and mossy. She had used to think (maybe she still thought) that alders were boys and birches were girls, but how did she know that? Had someone told her? She didn’t remember. And of course, she knew trees weren’t really boys and girls. When she was little she’d thought that all cats were girls and all dogs were boys, and had once argued the point forcefully with a boy at school called Melvin Fisher who was always picking on her. She hated Melvin Fisher, but when she’d asked Mam and Dad about it afterwards Dad had said Melvin was right, and Mam had called her soft, and said she didn’t have the brains she was born with. Izzy hated Melvin Fisher even more after that. But that was ages ago when she still went to school. She missed going to school. It was queer, but she thought she even missed Melvin Fisher in a way.

The path she’d been following had led her deep into the woods and – Izzy’s stomach gave a turn when she saw this – had now disappeared from under her. When she looked back the way she’d come, there was nothing like a path to be seen. How long had she been wandering among the trees? To be lost in the woods is to be lost in time, she thought, and wondered if she’d just thought it or if she’d heard it somewhere before. It was true anyway, because the time of trees was so much slower than the time of people; a moment in the real world might be a month in the forest. It was silent now as well, windless – and where had the sound of the river gone? She spun round looking for a landmark, and that’s when she first saw it, a small building, half-hidden, but waiting to be found, waiting for her swimming gaze to settle on it.

As she drew closer Izzy could see it was a chapel of some kind, though evidently long since abandoned. The trees grew so close to its outer walls, their trunks rising up like pillars, that it looked, she thought, like a church inside a church. What would a body do in such a place, she wondered; whisper the prayer inside the prayer? Worship the god inside the god? She was standing before it now, and wanted very much to get inside, but soon found the front door wouldn’t budge. Stepping back and craning her neck, she could see that the little bell-turret had three arched openings, and considered climbing up to see if she’d fit through (‘If you can get your head and one arm through a gap, then you’ll fit through it’, Dad had told her once, and she’d stored the words away dutifully with other useful information), but then, at the back of the Chapel, she found another, smaller door, and it opened easily.

The roof was adorned with foliate heads – queer, ugly faces with branches sprouting from their mouths and noses, and sometimes from their ears and eyes as well – and also with carved angels holding shields.

Inside, the floor was littered with leaves and pigeon droppings, and the air had been so long undisturbed that it seemed to have thickened and grown ponderous. There were seven rows of pews, a bone-dry font made of stone and yet apparently stained with rust, and, instead of a pulpit, a vast oak armchair carved with flowers and foliage. The roof was adorned with foliate heads – queer, ugly faces with branches sprouting from their mouths and noses, and sometimes from their ears and eyes as well – and also with carved angels holding shields. It looked to Izzy as though the angels and the foliate heads were ranged against one another like chess pieces. In the centre of the Chapel was a granite tomb – Izzy supposed it to be marble – inscribed with the name of Lord Somebody and a chain of Roman numerals. The sides of the tomb had canopied niches, in which stood the figures of young girls also holding shields, each dressed in kirtle, tunic and mantle. Between the stained-glass windows, a series of tombstones were let into the wall, and decorated with floral shields, swords, staffs and chalices. Above the door was an especially ornate foliate head with leafy branches coming from his mouth – oak leaves, Izzy saw, and among them acorns, though the cups were all empty – so that was the last thing you’d see as you left; and the first thing that you’d have seen when you entered that way was the crucifix on the opposite wall. Beneath the crucifix was carved the legend: In your devotion you bring all that you came here to seek. The crucifix and the huge foliate head seemed between them to generate a field of force; the air all but crackled.

Izzy knew what she was going to do. She was going to sit in the huge oak chair. Just for a moment. No one need know. Her footsteps crunched on the dry leaves and twigs as she crossed the floor. The Chapel was watching her, she could feel it. Izzy kept her eyes fixed on the chair – the throne – as though it were a living thing apt to take fright and gallop away before she reached it. Up close, it was if anything even more impressive, its elaborations soaked in the time and labour it must have taken to carve them, so that each detail seemed a power, a value demanding to be acknowledged. The whole thing had been polished, or waxed, and it had the dull shine of a rose hip. When she ran a finger along the throne’s filigreed arm, she felt a thrill as though she’d touched a sleeping cat. There was something wrong here, but what was it? And suddenly – she almost laughed – she realised: it was such a little thing, but utterly mysterious: there wasn’t a speck of dust on the throne, and yet everything else in the Chapel bore a layer of the stuff. Izzy bent closer. It was pristine, as though the workman had only just laid aside his chisel. Had someone been here, lately? It hardly seemed possible. It wasn’t possible: they would have left a trail in the dust and debris on the floor. Izzy took a deep breath, turned, and sat down on the throne.

It was like putting on new knowledge. It was like a tree, struck by lightning, throwing off its bark. It was like in a dream when you realise you can fly, and so easily you can’t believe you didn’t have the knack before. It was like freedom from fear, absolute and terrible. It was like conveyance, like being portered through a strange landscape at incredible speed, being still and without agency or any especial feeling about the matter, but speeding along nonetheless, ever closer to the destination that awaited you. It was like looking through a powerful telescope and seeing a ship sink in the distant ocean, knowing there’s nothing to be done about it. It was like being somehow simultaneously on the ship as well. It was like holding a lamp that held a genie, and also like being the genie inside; and it was like opening the lamp. And she could hear the distant applause of buds popping open on the branches of the beech trees in the wood. And she could hear the rent of the shell of a starling’s egg as it hatched, and the first cry of the baby bird as it reared its blind, bristly head in a ragged nest built in the knothole of a pollard elm. And she could hear the gasp of the otter before it slipped beneath the surface of the trackless waters of the Esh. And she could smell on the west wind the last, half-smothered drift of woodsmoke from a charcoal-burner’s grid-iron. And she could hear carried on the same breeze the whirr of the flywheel of the thresher in a barn. And she could smell the sweet, rotting marmalade odour of the beer-stained floor in the cellar of the Garland in Eshwood village. And she could taste the bitter succulence in the stems of the dandelions as they swayed in the sun. And now she was moving up and down and along her own veins with her own teeming blood.

She was lying on the floor with skinned knees. Had she thrown herself from the chair, or had it bucked and cast her off? Light-headed, she turned, half-crawling away to see if it had moved . . . No, there it was, where it had always been, all innocence, dumb as a water-butt. A chair. Izzy picked herself up and backed away. The light seemed different, as though she’d closed her eyes for a short nap and woken up in another part of the day altogether. She should be home already – there was washing to be done, that should be under way, and, she remembered, she didn’t even know exactly where she was . . .

The everyday world was already bearing down on her, but she took a last look around the Chapel before she left. It was the best place she had ever been. Izzy knew then and there that she’d come back often and that she’d never tell anyone about it.

From The Green Man of Eshwood Hall by Jacob Kerr. Used with permission of the publisher, Serpent’s Tail. Copyright 2022 by Jacob Kerr. 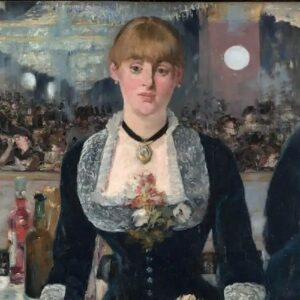 Get Some Perspective: How Crime Novels Use POV to Reveal Their True Mysteries Imagine crime fiction without the freedom to explore different perspectives to change point of view. Think of the omniscient...
© LitHub
Back to top