An infestation of feral hogs creates a bleak moral universe that can only be described in one word—noir.

Recently, in response to a Jason Isbell tweet that suggested Americans don’t need assault weapons, an Arkansas man tweeted: Legit question for rural Americans—How do I kill 30-50 hogs that run into my yard within 5 minutes while my small kids play?

I know that guy. Not personally, but I know him. I’d bet most Texans, Georgians, Floridians know him. Whether he’s that uncle, that brother-in-law. Whether he’s like my friend’s West Texas cousin who starts and ends each day driving a golf cart around his land, mowing down hogs with an AR-15. Massacres are his morning coffee, his night cap. Bodies everywhere.

I wrote about him in my upcoming novel, Ain’t Nobody Nobody (Polis, September 24), without knowing it. On page 2, an East Texas game warden stands on his porch and takes down a sounder of hogs with an AK-47. It sounds extreme, and yes, I wrote the scenario to comedic effect, but like Feral Hog Dude proves, it’s also real life. It’s also noir.

Plagues and infestations are the original noir and set the stage for the morally ambiguous hero. Whether it’s among the frogs and locusts of the Bible or Hitchcock’s birds, good noir presents dire, fatalistic circumstances and creates a playground for flawed characters to redeem themselves or turn to darkness.

Article continues after advertisement
Plagues and infestations are the original noir and set the stage for the morally ambiguous hero.

As you may know by now, thanks to Feral Hog Dude and the dozens of “Feral Hogs Explained” articles that followed in publications like New York Magazine and CNN, the feral hog plague is a real and devastating problem. Though it’s up for spirited debate, most scientists estimate that there are 4-6 million feral hogs in the United States, with about twenty to thirty percent of them residing in Texas and the next largest populations in Georgia and Florida. Oklahoma has the most per capita with 13 hogs per 100 residents.

They wreck our land and shit in our water supply. According to the USDA, feral hogs cause $1.5 billion in damage every year, $52 million in Texas alone. Imagine if that money went to education, healthcare, subsidizing farmers, or—plug yer ears, Hog Dude—sorting out this gun mess.

A good plague gives us the chance to be our own noir hero. Good noir presents messy scenarios and begs the audience to wonder, “What would I do?”

Texas gives you plenty of options. In 2017, the Texas legislature allowed us Texans to hunt hogs by hot air balloon.  Guadalupe County pays citizens to hunt feral hogs. On September 1 of this year, thanks to the unanimously passed HB 317, you too can hunt hogs without a hunting license. If you aren’t feeling like a lone ranger, you can call on HeliBacon, a South Texas helicopter hunting company that outfits every heli-hunter with a “semi-automatic AR-15, equipped with a holographic red dot sight and unlimited ammunition…for the full Texas experience.”

Two years ago, the Texas Legislature wisely voted down a push to poison hogs with Warfarin bait, an idea endorsed by the Texas Ag Commissioner no less. You might know Warfarin. Your grandma might be on it, also known as Coumadin, to prevent stroke. In hogs, it will bleed them internally over weeks. It’s a perverse, horrible way to die, but it’s desperate times. And it’s Texas.

While I by no means endorse non-NERF automatic weapons for sport (or anything, quite frankly), I do understand desperation and the way people are pushed to do crazy things because they can’t get a hold on external circumstances. And during this infestation, things look bleak. Hog Dude, in the face of plague, becomes the kind of noir hero who does not cower in a phone booth like some panicked Hitchcockian heroine. He embraces reckless, vigilante justice.

The original Texas hero, my dad, turns strategic and cunning. He mixes strawberry Kool-Aid into a bucket of corn and spreads it around a carefully orchestrated trap. Previously, he soaked corn in milk and let it sour. “Just like candy,” he says. “Eat it right up, then BAM!”  But hogs are smart, and their tastes and defenses change to outwit the protagonist. Just like a good noir villain.

One researcher estimated that, due to exponential growth, Texans would have to kill off 60% of hogs in a year just to keep the already-destructive population stable. I also don’t endorse killing thousands of animals that won’t be eaten and will essentially go to waste, but how can Texas stop the destruction that has cost so many farmers and ranchers their livelihood and altered the ecosystem to unbelievable degrees? Moral ambiguity is the cornerstone of noir.

Despite what Feral Hog Dude says, it’s rare for a hog to attack a human. Still, they’ll attack pretty much anything if their babies are in danger. Just ask Florida noir extraordinaire Steph Post (Lightwood, Miraculum) who, at Bouchercon last year, famously said that her Southern street cred was that she’d been treed by a wild boar. Their tusks are like razor blades. They’ll knife a dog in the side in a heartbeat.

Picture it. 1998. I’m in high school, coming home from a date. Cute boy walks me to my door. There’s that awkward possibility of a goodnight kiss. Do we? Don’t we?  Boy’s leaning in when we first hear the commotion. It sounds like a crowd descending upon us, a low roar that grows louder. We look out into the dark, and there are, yes, 30-50 hogs moving like a thundercloud across the yard. They’re a rival gang, and we’re on their turf. They’re loud, destructive, and tear up everything in sight. Boy and I don’t kiss. My noir hero awkwardly scrambles to his truck, visibly rattled by their approach. (He was raised in the city.) I stand on the porch alone, proclaiming chivalry dead.

Their tusks are like razor blades. They’ll knife a dog in the side in a heartbeat.

You too may get your own chance to be a noir hero. One Las Vegas friend reports a cockroach infestation. A town in Kentucky once had a blackbird infestation so dense that it blacked out the sky and residents walked around with umbrellas to protect themselves from a rain of shit. Evidently, cat-eating lizards are a thing in Florida. My dear feral hogs were spotted in Hong Kong’s version of Times Square, tourists from the hog-swathed hills surrounding the city. I grew up with David Letterman joking about all the rats and bed bugs in New York City. “Gee,” I remember thinking, hogs rustling outside my window. “Who would ever want to live there?”

Bleak and fatalistic, noir has no real winners. Victories are Pyrrhic at best. The conflicts are lose-lose. And nothing is more lose-lose than infestations. They’re messy. They’re bloody. And the bodies go on for miles. You might run to your truck or post misguided questions on Twitter. You might go in guns blazing, dangling from a helicopter. But you just might be one of the lucky ones, who get to sit back—mouth agape, breath tinged with sausage—and tell the stories. 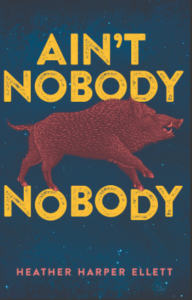 Born and raised in in the Piney Woods of East Texas, Heather Harper Ellett is a graduate of SMU and a therapist in private practice. She lives in Dallas with her husband and son. Her debut novel, AIN'T NOBODY NOBODY, will be published in Fall 2019 by Polis Books. 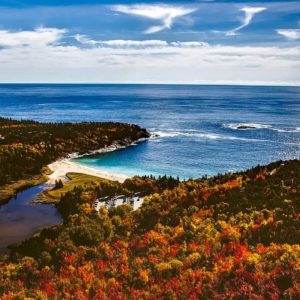 Maine is one of the safest states in the nation. Our murder rate is low, we don’t  have dangerous wildlife or poisonous...
© LitHub
Back to top