I grew up in the restaurant business where my Armenian parents owned a restaurant for thirty years in South Jersey. My mother was a talented cook and the grapevine in our backyard was more valued than any rosebush. I’d often come home from school to the delicious aromas of simmering grape leaves, stuffed peppers and tomatoes and shish kebab. Back then, lunch at school would be hummus and pita instead of peanut butter and jelly at a time when hummus wasn’t as popular as it is now. It wasn’t always fun as a teenager to have an eccentric, ethnic family, but I’ve grown to value my roots and my own colorful cast of family members.

When I wrote Hummus and Homicide, the first book in my Kebab Kitchen mystery series featuring Lucy Berberian, an Armenian, Lebanese, and Greek sleuth, I knew it was the right time. I had searched my local library and found some diversity in the darker genres of suspense and nonfiction, but not many lighter and beloved culinary cozy books. But who doesn’t love food?

As for the second book in the series, Stabbed in the Baklava, many enjoy this delectable dessert and I share my family baklava recipe in the book. One Feta in the Grave hits shelves on February 26, 2019, and includes recipes for Armenian date stuffed cookies, Lebanese lentil soup with kale, and Greek salad with feta cheese and kalamata olives.

Here are some of my favorite diverse culinary cozies: 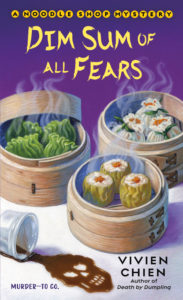 I started with her first book in the series, Death by Dumpling. I immediately liked the Asian American main character, Lana Lee. After a bad break-up and a workplace walk-out, Lana goes home to her family’s Chinese restaurant, Ho-Lee Noodle House, in Cleveland, Ohio. I loved her quirky and funny family, especially her mother who wants Lana to find a husband. In Dim Sum of All Fears, book #2 in the series, Lana’s still waiting tables at the Ho-Lee. She keeps looking for a “real” job, but her plans are upset when her parents leave for Taiwan to help her grandmother, and Lana has to run the family restaurant. Things take another turn for the worse, when the newlyweds who run the souvenir shop next door to the Ho-Lee Noodle House end up dead. Is it a murder/suicide or just murder? It’s up to Lana to figure it out. The food is to die for and the mystery is great, too. 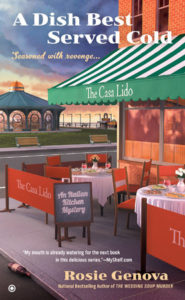 In the first book in her Italian Kitchen mystery series, Murder and Marinara, you meet Victoria “Vic” Rienzi, an Italian American mystery author. Taking a break from writing, Victoria returns home to her family’s Italian restaurant, the Casa Lido, at the Jersey Shore. I love her Italian family, especially her grandmother. In A Dish Best Served Cold, book #3 in the series, an old family friend comes to the Casa Lido and claims he has a good mystery for Victoria. But after a hurricane, the family friend is found dead. Is it an accident or murder? You’ll enjoy the mystery, and the Italian recipes at the end of the book will have you craving Bolognese sauce and pasta. 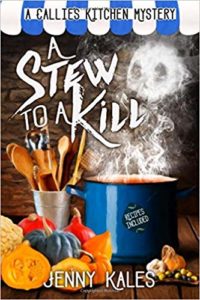 At the start of the series, (On the Chopping Block), Calliope “Callie” Costas, a Greek-American owner of Callie’s Kitchen in Crystal Bay, Wisconsin, is finally finding a bit of success. She’s moved on from a troublesome divorce and is raising her young daughter. In A Stew to a Kill, book #4 in the series, it’s Halloween season. When her friend’s employee is found dead in a tea shop, the murder threatens to derail the town’s festive fall events, including a Halloween Gala benefiting the local food pantry, one of Callie’s favorite causes. To make matters worse, an old flame shows up and wants to build a mall that could ruin Crystal Bay’s small businesses. Can she solve the murder and save the town’s events? Murder and Greek cuisine will have you devouring this series.

(Note—Jenny and I are members of the Cozy Mystery Crew Facebook group, but this didn’t influence my opinion.) 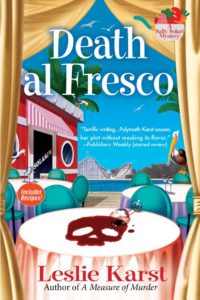 Leslie Karst writes a widely read series set in Santa Cruz, California. In the first book of the series, after her mother dies of cancer, Sally Solari quits her law job and returns home to help her father run his Italian restaurant. She has since inherited her aunt’s upscale restaurant, Gauguin, and has had success. In Death al Fresco, book #3 in the series, Sally wants to continue distancing herself from her father’s restaurant to focus on her own, but when her dog sniffs out a corpse tangled in the kelp on the Monterey Bay coastline, her dad is a suspect. The body is identified as a local fisherman and a regular at her father’s restaurant, Solaris’. Witnesses claim he left Solaris’ reeling drunk, and Sally’s dad is blamed for allowing an intoxicated customer to walk home alone. Sally has to clear her father’s name. Delicious descriptions of traditional Italian cooking combined with a compelling mystery make for a rich read. 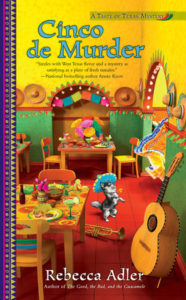 “A Taste of Texas” Mystery Series by Rebecca Adler

Next is Cinco de Murder by Rebecca Adler. The series starts with Here Today, Gone Tamale and features Josie Callahan, a reporter who loses her job and returns home to Broken Boot, Texas to work at her uncle’s Tex-Mex restaurant called Milagro. I like her little Chihuahua, Lenny. In Cinco de Murder (book #3 in the series), it’s Cinco de Mayo festival time. Josie’s uncle is planning Broken Boot’s First Annual Charity Cook-Off. But things don’t go as planned, when a chili cook is found dead in his festival tent. Josie’s uncle is a prime suspect, and she has to use her former-reporting skills to solve the crime before someone else ends up dead. Delicious Tex-Mex recipes are included. 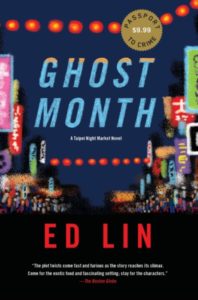 Last, is Ghost Month by Ed Lin. This was recommended, and I’m glad I discovered another author of diverse mystery. The series is set in Taiwan. Jingj-nan (Johnny), who runs a food stand in a Taipei market, is distraught when he learns that his former high school sweetheart, Julia, is murdered. She’s found half-nude and shot on the side of a highway where she was selling betel nuts to passing truck drivers. Julia was a NYU honors student and Jingij-nan can’t comprehend why she returned to Taiwan to sell betel nuts. Things don’t add up and he becomes embroiled in finding her killer. The sights and sounds of Taiwan come to life in the book, and the food is described in mouthwatering detail.

Enjoy the food and the cozy mysteries!

Tina Kashian is an attorney and a former mechanical engineer whose love of reading for pleasure helped her get through years of academia. Tina spent her childhood summers at the Jersey shore building sandcastles, boogie boarding, and riding the boardwalk Ferris wheel. She also grew up in the restaurant business, as her Armenian parents owned a restaurant for thirty years. Tina’s books have been Barnes & Noble top picks, and the first book in her Kebab Kitchen Mediterranean mystery series, Hummus and Homicide, spent six weeks on the B&N bestseller list. Please visit her website to join her newsletter, receive delicious recipes, enter contests, and more! 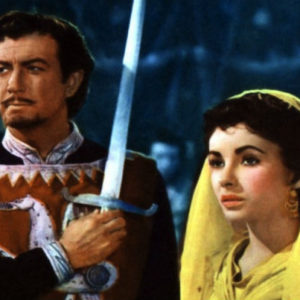 With a resurgence of interest in historical settings for novels, romances, and mysteries, it’s interesting to look back...
© LitHub
Back to top