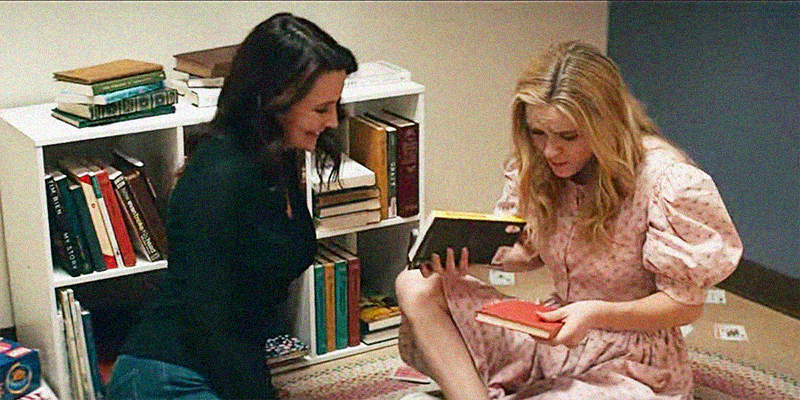 "There are horror movies about writers, and then there is the horror of seeing the realities of the writing life rendered on the big screen."

My brother, John, is an actor. A few years ago, he was cast in an independent Irish horror movie called Beyond the Woods. Filming took place in a secluded house in the Cork countryside in the dead of winter, mostly at night, over the course of a couple of weeks, with the small cast and skeletal crew staying onsite. Before shooting could begin, the director had to visit the local Garda (police) station to say that if they got a report in the middle of the night of blood-curdling screams coming from the woods, it wasn’t someone getting murdered. It was just them, shooting their horror movie.

It’s a hazard of my job (crime writer; yes, spare a thought for our parents but they can take solace from the fact that my sister has a respectable 9-5) that I immediately thought but what if it was someone getting murdered? The set of a horror movie started to look like a great place to set a thriller novel. When I sat down to write the book that would become Run Time, it became clear that in order for my idea to work, I needed to put the script for the fictitious horror movie at its center inside the novel, fully intact. To prepare for this, I set about re-watching some of my favorites in the genre.

I love when writers write about writing, so a disproportionate number of them featured scribes. There’s plenty about the writing life—the isolation and frustration, the blurring of the lines between fact and fiction, reading your own online reviews—that suits a genre concerned with the darkest corners of the human mind. I was watching some of these movies for the first time in years and, in those years, my own life had changed utterly. I’d gone from dreaming about being a published author to doing it full-time and this was having a strange side-effect. When I watched Misery, it wasn’t Annie Wilkes that terrified me the most. It was seeing a completed draft of a novel on actual paper knowing that—it’s hard to even type this—it was the only copy of it. (Noooooooooooooooo etc.)

There are horror movies about writers, and then there is the horror of seeing the realities of the writing life rendered on the big screen. I’ve rounded up five such instances below. Some of these movies will get your heart racing because they’re so close to the bone, but others will have you watching through your fingers because it’s clear no one involved has ever actually seen a real book, let alone talked to someone who writes them. But all of them are, in their own ways, a lot of fun. If you’re a writer, maybe wait until after you’ve met that deadline to get stuck in. If you’re a reader, you can watch these knowing that the authors who try so hard to thrill and scare and confound you find these things the scariest of all. 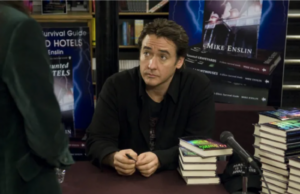 This is that other movie adapted from something Stephen King wrote about a writer losing his mind in a hotel that doesn’t exactly encourage check-out. One-time Serious Writer™ Mike Enslin (John Cusack) now ekes out a living writing about haunted hotels that, in his experience, aren’t actually. But when he checks into room 1408 at the Dolphin in NYC, despite the pleadings of the hotel’s manager (Samuel L. Jackson) to stay away, real horrors soon ensue. One of the scariest scenes in the movie comes right at the start when Enslin, who hasn’t published a new book in ten years, arrives at his own event only to be mistaken by the bored clerk for a customer, and then has to suffer the indignity of speaking to an audience of four people spread out from one another in a sea of empty chairs. Give me a haunted hotel room over that any day. 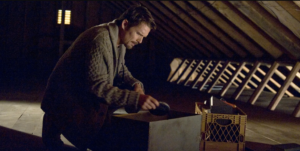 I’ve never been a huge fan of research. It’s called fiction for a reason and if our crime novels were factually accurate, there’d have to be 300 pages in the middle where someone is just waiting for forensics to come back. This movie absolutely affirms my professional choices. True-crime author Ellison Oswalt (Ethan Hawke) has just moved his family to a new town so he can investigate the grisly murder of a family who once lived there. We know he’s a writer because his cable-knit cardigan has leather elbow patches and he wears his reading glasses on a chain around his neck. Oh, and he’s neglected to tell his wife that he’s moved them into the actual house where the murders happened and that he’s just found video footage of their deaths in the attic. (Something tells me Hallmark don’t have a suitable ‘New Home’ card for that.) I have to watch most of this one through my fingers because it’s truly disturbing, but the thing that really gives me the shivers is their precarious financial situation. They haven’t sold their old house yet so they’re stuck paying two mortgages, his last book was a disaster and he’s writing this new one on… On… On SPEC! [Insert a high-pitched, blood-curdling scream here.] 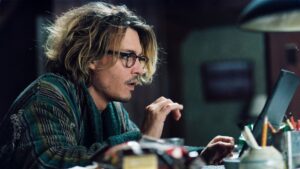 Based on a novella by—yes, you’ve guessed it—Stephen King, this movie has the misfortune to star Johnny Depp as mystery writer Mort Rainey, but since it also stars the fantastic John Turturro and was written and directed by David Koepp of Jurassic Park fame (now an acclaimed novelist himself), I’m including it here. Depressed, getting divorced, and suffering from both writer’s block and the worst bedhead-hair you’ve ever seen, we meet Rainey holed up in his ramshackle cabin by the lake, living off a diet of Doritos and Mountain Dew. He’s spending his days alternating between naps and staring for hours on end at the only four lines he’s managed to type. (He appears to have left two spaces after the period, which I’m sure you’ll agree is the scariest detail of all.) And things are about to get much, much worse, because a dangerous man is accusing him of plagiarism. In terms of what it’s like to work from home, alone, as a writer, facing a deadline but with no words to get you there, this movie gets an A+ for accuracy. And that makes it one of the scariest writers-in-a-horror-movie movie of all. 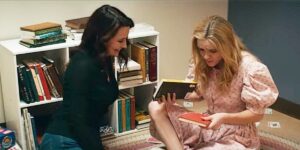 If Secret Window sits at one end of the life-of-the-professional-writer accuracy spectrum, this so-called ‘steamy thriller —spoiler alert: it’s neither—sits about 500 feet past the opposite end. Mega-selling thriller-writer Mary Morrison (Kristin Davis) has decided to stop writing mega-selling thrillers for unspecified reasons. Her publishers tell her that they’re struggling financially and so really need her to write just one more book in the series, even though her previous eight titles are still selling craploads so I’m struggling with the math. They then present her with a terribly written offer that promises an ‘an advancement of: TWO MILLION DOLLARS’ not for a book with a delivery deadline as per, you know, reality, but ‘to commence writing immediately’. And that’s before we get to the bit where Morrison, resigned, sits down at her desk and begins to write her novel on unlined printer paper, by hand. (I can’t even.) This movie also suffers from a confusingly common affliction: no book seen on screen looks like any book you’ve ever seen in real life. Dear Hollywood, please start hiring actual book designers to make the covers of your movie-books, love Catherine. This one isn’t supposed to be a horror movie, but it truly is horrific. What upsets me the most though is that they didn’t call it Deadly Allusions. I mean, come on. 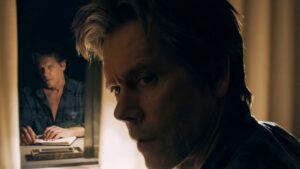 YOU SHOULD HAVE LEFT

A few years ago, on Ireland’s annual Independent Bookshop Day, I called into The Company of Books in Ranelagh, near where I was living in Dublin, and asked them to recommend a book for me. This is how I ended up buying a small, slim novella called You Should Have Left by Daniel Kehlman. Translated from its original German, it told the tale of a screenwriter who retreats to a secluded Airbnb with his wife and young daughter so he can get to work on the sequel to his biggest commercial success, Besties. The novel takes the form of the notebook he keeps to track his progress, which is soon hampered by Very Mysterious Goings-On. In 2020, David Koepp, making his second appearance on this list, turned it into a movie starring Kevin Bacon and Amanda Seyfried, and inexplicably recast the narrator as a retired banker who’s, like, really trying to get into meditation. He still does a lot of scribbling in notebooks though, so I’m including it here. This movie and the novella it’s based on are great reminders that you probably don’t need to relocate to a dangerously isolated spot to get some words down. If you really can’t work at home, maybe try a Starbucks. 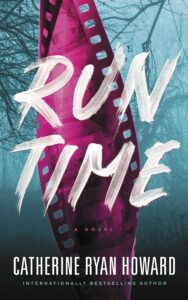 Catherine Ryan Howard has been a finalist for the Edgar Award for Best Novel, the CWA’s Ian Fleming Steel and John Creasey (New Blood) Daggers, and Irish Crime Novel of the Year multiple times. The Nothing Man, her mix of true crime and crime fiction, was a no. 1 bestseller in her native Ireland. She is currently based in Dublin, where she divides her time between the desk and the couch. Run Time is now available from Blackstone. 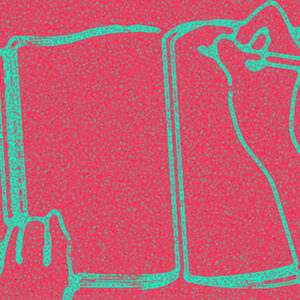