On The Femme Fatale Who Flipped the Script

Mid-century American realist painter Edward Hopper is enjoying a moment. Best known for his disengaged customers at a neon-lit diner counter and his flapper staring into a coffee cup in a lonely automat at night, Hopper depicted social isolation before a pandemic made it a way of life. It’s no surprise that the famously reclusive artist binged on movies when he was creatively blocked, read pulp fiction, and had a lasting impact on film noir. He even influenced Alfred Hitchcock: the house in Psycho is modeled on a Hopper painting.

Hopper’s paintings have been described as “perpetually Sunday” and depicting “a world without a future.” Children had no place in that world. In Hopper’s one painting with a dog, a collie ignores a scowling woman and a defeated man who’s trying to get the dog’s attention. Ears pricked and tail high, the collie may be alerting to a sound beyond the frame, but he looks like he’s about to make a break for it. And who could blame him?

Hopper’s all-night diner was as convivial as it got. The subject to which he returned over and over was a hard-featured blonde with pointed breasts. Viewed through a doorway or window, she’s depicted in profile or looking down, often with a suitcase or valise as props. Sometimes she’s with a man. Their only engagement seems to be ignoring each other, but they are locked in mortal combat. Hair upswept in a Gibson girl bouffant, cut in a flapper’s marcel bob, or flaming across the stage to the beat of a stripper’s burlesque, she’s the same stony blonde.

The classic noir anti-hero is cynical and alienated. His counterpart is the femme fatale, whose predatory sexuality drives the plot. The stakes are love or death; mutual destruction lies at the end. For 50 years, Hopper painted his blonde. In the end, she flipped the script.

Born in 1882 in Nyack, New York, Hopper was raised in a strict Baptist household dominated by his mother, Elizabeth Griffiths Smith Hopper. Shy, homely and bullied at school (he was six feet tall by age 12), he showed an early talent for drawing. After studying illustration, he transferred to The New York School of Art. In 1906, he took his first of three trips to Paris. He roomed at a boarding house Elizabeth chose above a Baptist school. He later denied Paris had any great impact on him, but his stony blonde dates from those years.

Until recently, it was assumed there were two women in Hopper’s adult life: an English girl named Enid Marion Saies, and Josephine Nivison, the artist he eventually married. After Jo died, however, 58 letters and one unsigned note by Minnesota socialite Alta Hilsdale were found in Hopper’s old attic in Nyack. Each of these women could be a stand-in for the stony blonde.

Hopper met Enid Saies on his first trip to Paris. Tall and vivacious, Enid lived in his boarding house while studying French literature at the Sorbonne. Hopper took her to Versailles and the Opéra; he made Enid laugh. Intent on marriage, he followed her back to London. After taking her to dinner in Soho, he sat in her garden while she embroidered a waistcoat and he helped her by biting off threads. The waistcoat, however, was for a French suitor to whom Enid was engaged. As Enid later told her daughter, Hopper suddenly recoiled and declared he wasn’t going to do that for another man. He wired his parents for money, kicked around Europe a few more weeks, and came home.

Alta Hilsdale briefly overlapped with Enid. What’s known of her relationship with Hopper comes from the cache of letters in his boyhood attic. Collected and edited by Elizabeth Thompson Colleary in My Dear Mr. Hopper, the letters are dated 1904 to 1914 and postmarked Paris, New York, and Sauk Center, Minnesota. They are a decade-long drumbeat of rejection delivered in flowing cursive and an aggrieved flirtatious tone: I should enjoy it very much to go to Saint Cloud, but I really don’t see when I could do it…. I am sorry I shall not be in Saturday evening—will you come Tuesday instead? … Certainly I might have spared you one evening this week—I might also have spared several other people one evening—and where would my evenings have been?

Alta may have feared she’d pushed Hopper too far. A 1908 letter to him recounts a nightmare in which he threw her off a cliff for not answering one of his notes. Her only unsigned and undated note, scrawling, unpunctuated and with a cross-out, gets right to it: You are the type of a man who does not believe that a girl can be platonic indefinitely It seems to me that you are in a class who regards every girl as one with designs to besiege your affection

In 1914, Alta ended her correspondence by informing Hopper she was about to marry a Mr. Bleecker and begging him to forgive her for causing him such unhappiness.

In 1924, Hopper married Jo Nivison. Old classmates at the New York School of Art, they reconnected in their early 40s on a painting trip to Gloucester. Hopper had been supporting himself by illustrating magazine covers—work he detested—and had sold only one painting. Jo, a successful watercolorist who’d exhibited with Man Ray, Modigliani and Picasso, convinced the curators at the Brooklyn Museum to include Hopper’s paintings in a group show. The exhibition launched Hopper’s career but sent Jo on a long slide to oblivion as an artist. When she died in 1968, after having bequeathed their paintings to The Whitney Museum, The Whitney threw out all of Jo’s work.

Jo was feisty and petite, Hopper a dour loner. Their 40-year marriage was volatile and even violent; she scratched and bit him, he cuffed her and banged her head into a shelf. He disparaged her art but hung a mirror next to his easel to watch her paint. In a caricature of Jo as a disembodied topknot with earrings, a collar, cuffs and shoes, he erased her. Biographer Gail Levin quotes the couple’s friend, Barbara Novak, recalling Jo “saw the world through a barbed-wire screen of resentment.” Novak said in a crowded room they radiated isolation together.

Jo managed Hopper’s business and controlled his relationships. A trained actress and his only model, she didn’t just pose. As she recorded in extensive diaries, together they named and created personas for his characters and gossiped about their habits. In 1941’s Girlie Show, a stripper with red hair, ruby lips, and pointy scarlet-tipped breasts prances across an elevated stage to an audience of inert male heads and a bored percussionist. Jo posed for the stripper nude, stretched out on her back, playing dead. While the painting was still in progress, she fantasized about the percussionist. “Did he kill her?” Jo asks. “Can’t tell yet.”

Which brings us to Hopper’s stony blonde.

The blonde first appears in Hopper’s 1906 watercolor, Couple near Poplars, as a petite Gibson girl with a gawky swain. Hair upswept, with a pinafore over her corseted waist, she faces into the wind with her arms tightly crossed and lips grimly set. Forty years later she’s the girl on the porch in 1947’s Summer Evening, provocatively dressed in a pink bandeau and high-cut shorts, staring sullenly down as her date leans in imploringly. In 1932’s Room in New York, she’s the wife in the evening dress at the piano, idly touching a key while her husband ignores her for his newspaper. Her hand on the keyboard is poised to come crashing down.

When she is alone, the blonde tells another story. In 1927’s Automat, she’s a flapper slumped over a coffee cup in a neon-lit cafeteria. If she’s contemplating her next move, it takes her four years. In 1931’s Hotel Room, she sits at the edge of a bed in a chemise, shoes kicked off and bags on the floor, bent over a train schedule in her lap. Preparing to make a run for it, like that collie in the grass.

Blonde hair pulled back, in a striking red dress, she sits upright at the foot of a neatly made bed. The picture window behind her frames what could be a Western movie set: blue sky, mountains, and an Aztec green Buick sedan with a bull’s-eye chrome bombsite on the hood, raring to go. Tagged and packed, her bags stand at the door. A pair of blue men’s boxer shorts is draped on a chair. She’s leaving without him. And after 50 years, she finally looks straight at the viewer.

Here, as she faces us for the very first time, Hopper’s blonde’s arc ends. In walking out of Western Motel and into the world, this femme fatale chooses life over love or death. 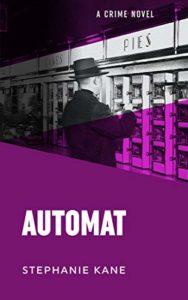 Snapshots in the Life of a Criminal Data Analyst 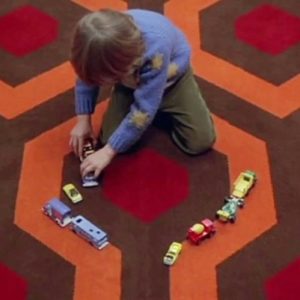 In my new book, The Other People, Alice is a little girl with a rather strange ability. She’s not alone. Literature is full...
© LitHub
Back to top