The Friends of Eddie Coyle may not have been the first crime novel set in Boston, but it’s the first one that matters. George V. Higgins couldn’t have known he was launching an entirely new subgenre when his fifteenth attempt at writing a debut novel was accepted for publication in 1970, but Coyle’s DNA is imprinted on everything that followed, from Robert B. Parker’s Spenser to Dennis Lehane’s Kenzie and Gennaro to the glut of Boston-based crime movies starring marble-mouthed actors pronouncing “car keys” like “khakis.”

In truth, Higgins’s influence extends beyond the borders of Beantown, at least as far as his fellow writers and crime fiction buffs are concerned. (Elmore Leonard called Coyle the best crime novel ever written, and its influence is all over his own work.) Yet Higgins remains an obscurity outside of that niche, most of his 32 books long out of print and difficult to find. That his work has penetrated the mainstream culture at all is largely thanks to the excellent 1973 film adaptation of Coyle, directed by Peter Yates and starring Robert Mitchum—and even that went unseen for decades before its resurrection by the Criterion Collection in 2009.

Born in Brockton, Massachusetts in 1939, Higgins never strayed for long from the Hub he chronicled throughout his literary career. He attended Boston College and made a brief go of it at Stanford before returning to New England to cover Mafia trials in Providence for the Associated Press. He became a prosecutor for the US Attorney’s office and pursued private practice in Washington DC for a short time, but settled back in Boston, the city he understood from the lowliest Southie street corner to the corridors of power on Beacon Hill.

Higgins followed Coyle with The Digger’s Game and Cogan’s Trade, and it’s that loosely connected trilogy that would define the Boston underworld in pop culture for decades to come. What hits you first and stays with you longest: the voices. Open to any page and you can’t help but notice them, since the books are close to ninety percent dialogue. This has led some readers to conclude that the novels are plotless, but that’s not the case at all. In Higgins—especially early Higgins—dialogue is both story and character. This is the number one lesson I took from his work in writing my own Boston crime novel, Charlesgate Confidential. Someone has to tell you the story, whether it’s an omniscient, nameless third-person narrator or the characters themselves—and if you’ve got colorful characters with the gift of gab, isn’t it more fun to let them tell it?

Take the introduction of Eddie Coyle, initially referred to only as “the stocky man” in the novel that bears his name. We don’t need any further description; the man known as Eddie Fingers on the street supplies it himself:

“All of them?” Jackie Brown said.

“Ah Christ,” the stocky man said. “Count as many of them as you want. I got four more. One on each finger. Know how I got those? I bought some stuff from a man that I had his name, and it got traced, and the man I bought it for, he went to MCI Walpole for fifteen to twenty-five. Still in there, but he had some friends. I got an extra set of knuckles. Shut my hand in a drawer. Then one of them stomped the drawer shut. Hurt like a fucking bastard. You got no idea how it hurt.”

As Eddie’s story progresses, we come to realize the novel’s title is a ruefully ironic one. Eddie Coyle has no friends. Higgins has stripped all the glamour from the gangster story, turning The Godfather on its ear. Eddie’s story unfolds in seedy bars and cheerless coffee shops. Crime pays, but it doesn’t pay much, and Eddie’s hustle to sell hot guns is a world away from the Corleones conquering casinos. There’s a tribal specificity to the world Eddie and his fellow low-rent hoods inhabit; if they’re not gossiping about their fellow criminals, they’re probably bemoaning the fortunes of the Red Sox or the Bruins. These conversations happen on the Common or at the Garden, or on a good day, the Parker House or Jacob Wirth’s.

When Higgins died in 1999, Robert B. Parker penned his obituary for the Wall Street Journal. It was only fitting, since Higgins had provided a blurb for Parker’s first Spenser book. “He didn’t know me, but he sent my novel to his agent and urged him to represent me. He wrote an article about me in Boston magazine, and publicly berated my first publisher for not doing more on my behalf,” Parker wrote. Although Higgins noted the debt Parker’s first book owed to Raymond Chandler, the later entries in the Spenser series bear more than a passing resemblance to Higgins as their stories unfold largely through punchy conversation. Dennis Lehane, in his introduction to the 2010 edition of The Friends of Eddie Coyle, called it “the game-changing crime novel of the last fifty years”; he told Publisher’s Weekly it’s the Boston novel that influenced him most.

Higgins’s influence can be seen on the screen as well, even though the only adaptation of his work since Coyle is Andrew Dominik’s 2012 take on Cogan’s Trade, Killing Them Softly. Dominik moved the action to New Orleans, but retained all of Higgins’s Boston references along with huge chunks of his dialogue. Ben Affleck paid visual homage to Coyle in The Town, when his bank robbers send Rebecca Hall’s character walking blindfolded down to the shoreline. The Departed may have been based on the Hong Kong thriller Infernal Affairs, but the characters and dialogue reek of Higgins (which is odd, since screenwriter William Monahan once dismissed Coyle in an interview as “a sort of Amos and Andy dialect comedy about his own people”).

The world of Higgins’s first three novels is where the Boston crime genre still largely resides in the popular imagination, but the author himself wasn’t content to keep exploring this one particular slice of the city. In the decades that followed, he chronicled cops (The Judgment of Deke Hunter), politicians (A Choice of Enemies), defense attorneys (the Jerry Kennedy quartet), and high society (Swan Boats at Four), expanding his Boston canvas far beyond the working-class Irish neighborhoods that spawned his memorable crooks. Though he would return to that world occasionally (Trust, The Rat on Fire), he disdained being known as a crime writer. Not all of the books hold up. At times the deadpan humor is lost and his thickets of dialogue become virtually impenetrable, providing camouflage to stories that unfold on an almost subliminal level.

While the first three are still the best, it’s heartening to see the genre start to emerge from their shadow. Recent works by Adam Abramowitz, Clea Simon, and Edwin Hill have taken the Boston crime novel in new directions, while Dennis Lehane has moved on to historical fiction and the psychological thrills of his latest, Since We Fell. A greater diversity of voices and viewpoints can only help the genre thrive, but its origins should never be forgotten.

Scott Von Doviak's twenty-year pop culture writing career includes three books, a stint as a film critic for the Fort Worth Star-Telegram, and an ongoing role as television reviewer for The Onion's AV Club. His debut novel Charlesgate Confidential is now available from Hard Case Crime. He graduated from Emerson College in Boston and now lives in Austin, Texas. 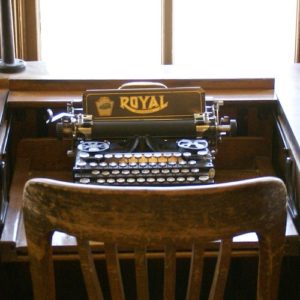 I imagine writing a crime novel is close to the middle of human experiences ranked by difficulty. It isn't brain surgery,...
© LitHub
Back to top