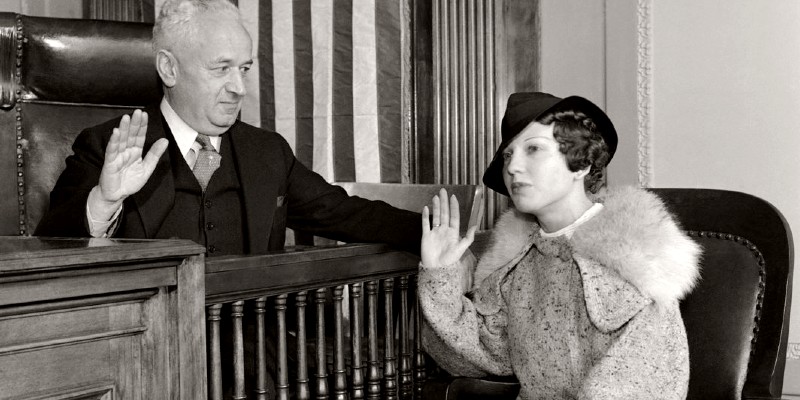 In January 1936, twenty-one-year-old Ann Cooper Hewitt, the well-known San Francisco heiress, called a press conference alongside her attorney and announced that she was suing her mother, Maryon Cooper Hewitt. Ann claimed that she had been secretly sterilized at the behest of her mother, who paid two doctors to perform the procedure in order to prevent her from claiming an inheritance under her father’s estate. The allegations were explosive news and immediately caught the attention of San Francisco District Attorney, Matthew Brady. (Excerpted from The Unfit Heiress: The Tragic Life and Scandalous Sterilization of Ann Cooper Hewittby Audrey Clare Farley.)

Shortly after Ann’s press conference in San Francisco, the district attorney got wind of her case. At first, Matthew Brady’s eyes widened as he read the girl’s accusations in the San Francisco Examiner. Then his mind began to turn. Here was an opportunity to charge four individuals (Mrs. Cooper Hewitt, the doctor who ordered the operation, the doctor who performed it, and the alienist) with a felony not often encountered outside of legal textbooks: mayhem. This criminal charge was reserved for cases involving the act of disabling or disfiguring an individual, and it was punishable by up to fourteen years in prison. 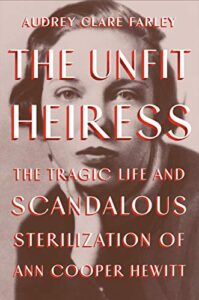 Brady immediately conferred with his assistant, August Fourtner, and Police Inspector George Engler about the matter. The group’s cursory research revealed that over ten thousand individuals in the state had been sterilized in public institutions since California had passed a law authorizing sterilization in 1909. There existed no record of the number of sterilizations performed in private practice, though some legal experts predicted the number was large. The law didn’t authorize these procedures, meaning that there could be hundreds—or even thousands—of individuals like Ann, whose rights had been violated.

The most frequent techniques for sterilization were vasectomy and salpingectomy, which Ann had undergone. Castration and spaying were generally avoided, as these procedures didn’t merely render individuals incapable of producing children—they desexualized them. This last fact might present a conundrum for the San Francisco prosecutors, Brady realized. Mayhem cases hinged on proving that one’s body had been maimed, rendered useless,  or substantially changed in physical character. What if defendants argued that the primary purpose of sex was pleasure, rather than procreation, and therefore that the operation did not amount to an act of mayhem?

Brady imagined his opponent declaring in court, “The woman has not been ‘unsexed,’ as she claims. She has only had her tubes removed. She can still gratify her desires—no one has taken that from her.” If the court accepted this logic, the case could be dismissed, and he would be harangued for drawing the public’s attention to such an impolite fact.

But on another legal point, Brady and the other two men were emboldened. Criminal liability for mayhem required proof of gross negligence, criminal intent, or the fact of being engaged in the commission of another felony. There was no question that Ann’s mother had acted with malice and insidious intent. As far as they were concerned, she had debilitated her daughter simply to tighten her grip on the family money. The doctors, too, had acted wickedly. Each had accepted $9,000 for a procedure for which they ought to have been paid a few hundred.

“Of course, the court will see that they were bribed,” Fourtner said. “The monstrous woman paid them to execute her plot and then keep quiet about it.”

“What about the psychologist?” Engler asked. “What did she get out of this?”

The mayhem charge against her might prove more difficult, Brady agreed. But perhaps forthcoming facts would implicate Mary Scally, too.

A meeting with Ann’s attorney assured the three city officials that a parallel criminal case was imperative. There was no question that the salpingectomy had been completed without the girl’s knowledge. And it would be easy to prove that this procedure— and not the appendectomy—was the primary reason for cutting the girl open. Boyd had foolishly revised the medical records after the fact, inserting “organs infantile” to explain why an incision had been made in the girl’s abdomen at the site of the fallopian tubes, rather than the appendix. The operating physician also recorded on a later date that the fallopian tubes had only been tied, when, in fact, they were removed, making it impossible to reverse the procedure. It was as if the severity of the crime had struck Boyd later and he went back to cover his tracks. Brady had already arranged for the paper to be chemically tested to substantiate in court that the doctor had, indeed, revised the medical notes well after the operation took place.

The testimony of the nurses attending to Ann before and after the procedure also strengthened the prosecutors’ case. Ann was completely normal, these persons maintained. One of them, Grace Wilkins, had just received a sealed letter from Mrs. Cooper Hewitt’s attorney warning her “not to talk.” Another said that she had received a telephone call threatening death if she testified.

This case was a winner, the prosecutors thought.

To avoid being accused of collaborating with the heiress, Brady and Fourtner planned to tell the press that Ann had neither requested nor attended the meeting and that they had no intentions of involving her in the investigation. “It would be most unfair that she assume the duties and obligations of the police department,” they’d say. “The poor woman is dealing with enough as it is.”

Of course, both district attorneys had confirmed with Tyler that Ann would cooperate by signing the criminal complaint and, if necessary, taking the stand against her mother. “The case is dead if the girl gets cold feet,” they cautioned.

“You don’t need to worry about that,” Tyler had assured them. “She is determined to prevail against her mother. And also to prevent such a terrible crime from happening to anyone else.”

With this assurance, Brady and Fourtner held their own press conference. Brady did the talking. “I am not prepared to make a definite statement on the law in this case,” the man told the scribbling reporters outside his office. “There are many angles to be investigated. I can say, however, that the charges will probably be presented to a grand jury very soon. And justice will be served.”

“Tell us what angles you are considering,” a man from the San Francisco Examiner urged.

“The legality of the sterilization, to start,” Brady responded. “There’s only one state law pertaining to sterilization, and it allows superintendents of state mental hospitals to authorize operations of feebleminded persons. There’s no record of such persons being involved in this case. Dr. Tillman is not a superintendent, and the plaintiff is not feebleminded.”

“Are you saying that Mrs. Scally’s investigation didn’t count?”

“That’s for the courts to decide,” said Brady. “However, the psychologist’s supervisor has since demanded that all requests for psychological examination of minors be made in writing and approved by his office.”

Earlier that day, the district attorney had received a telephone call from California State Health Officer J. C. Geiger with this policy update, as well as a request for all pertinent information related to the investigation to be shared. Tongues were wagging, and authorities needed to assure everyone that the laws were strictly enforced. “It’s not as though anyone can be plucked off the street and snipped,” Geiger had insisted. “We must communicate this fact, or else there will be riots.”

Apparently, most physicians agreed with these practices. For decades, they had been arguing that sexually deviant behaviors were medical, not moral, matters. They said the same about poverty and other social circumstances. The “conditions once considered criminal are really pathological, and come within the province of the physician,” the editor of The Medical Record had opined in 1884. To justify their oversight of sexual abnormality, doctors observed that morally loose individuals tended to have congenital defects, such as enlarged reproductive organs.

Brady had also received a telephone call from a representative of a physicians association, who was worried that a criminal case posed a threat to the profession’s authority, though not exactly in matters related to sterilization. “Doctors in the state are concerned about the implications of a criminal mayhem case,” the representative had claimed. “Many of them routinely perform”—she’d lowered her voice to say the next word—“abortions upon minors, at the parents’ request. In these cases, it is rightfully assumed that the parents know best. How can a thirteen-year-old girl who has gotten into trouble possibly be trusted to make responsible decisions?”

Brady had told this caller that he had never considered the repercussions of a particular case when deciding upon a course of action, and he wasn’t prepared to start now. As a district attorney, it was his job to seek justice for crimes committed in his city and to let the chips fall where they may. If the state of California determined that a minor could seek recourse against her parents for an unwanted operation—abortion or otherwise—then so be it.

The prosecutor was not surprised to observe one physician with his black bag in attendance at the press conference he gave outside his office. The medical man stood quietly, arms crossed, as he listened to Brady relate the facts of the case and the relevant points of law. 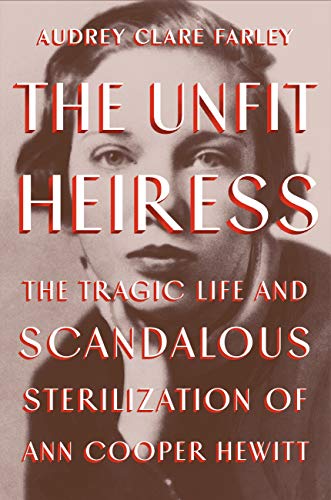 Audrey Clare Farley is a writer, book reviewer, and historian of twentieth-century American fiction and culture. Having earned a PhD in English from University of Maryland, College Park in 2017, she occasionally lectures in history and literature at local universities. Her essay on Ann Cooper Hewitt, published in July 2019 in Narratively, was the publication’s second most-read story of the year. Her writing on the eugenics movement and other topics has appeared in The Atlantic, The Washington Post, The New Republic, Public Books, Lady Science, Longreads, and Marginalia Review of Books, where she is a contributing editor. She lives in Hanover, Pennsylvania. 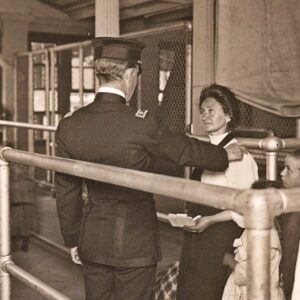 As an immigrant, I often seek out works of literature reflecting issues that might arise with moving to a new country, especially...
© LitHub
Back to top